You can build anything on the back, from a camper to a bucket truck.

Last month, Bollinger revealed its electric Class 3 platform called the E-Chassis. Today, the company announced how it plans to use it. Starting late next year, Bollinger will offer a chassis cab version of the platform to commercial customers. Called the Bollinger B2 Chassis Cab, or B2CC, it’ll be “the world’s first and only Class 3 all-electric chassis-cab truck platform,” according to the company.

Bollinger will offer the B2CC in both two- and four-door configurations in both full-cab and cutaway-cab variants with various wheelbase lengths, providing customers with numerous possibilities. Commercial companies flock to chassis cab trucks so they can install their own aftermarket or third-party accessories for whatever job they need to do. It’s no different for the B2CC, either. 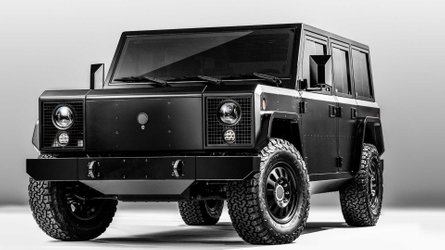 Bollinger B1, B2 Prepare To Take Electrification Off-Road 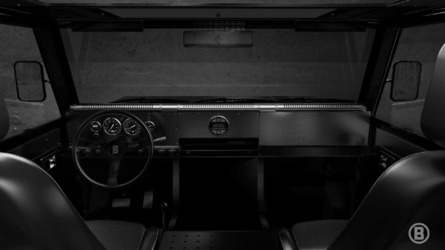 The B2CC is based on the B2 electric pickup truck – both of which ride on the same E-Chassis platform. It’ll feature a 120-kilowatt-hour battery pack and a twin-electric-motor setup that provides all-wheel-drive capabilities. Payload capacity tops out at 5,000 pounds (2,267 kilograms).

Other features include portal gear hubs, a “patent-pending passthrough,” and a self-leveling suspension. Commercial customers will enjoy complete power system controls – which are configurable for each vehicle application – a 10-kW onboard charger/inverter, and an integrated thermal management system.

Bollinger says the B2CC could be used by a variety of services, such as first responders, construction companies, municipalities, park services, and more. Images Bollinger provided of the B2CC shows some of the possibilities – like a bucket truck or tow truck.

The B2CC is yet another Bollinger we’ll be waiting to see hit the open road. The company says it’ll be in late 2021. Pricing hasn’t been announced, though it’s likely dependent on the B2CC’s desired configuration. Next year will also see Bollinger put the B1 and B2 into production, which both have a $125,000 price tag.

DETROIT, April 30, 2020 — Bollinger Motors announces plans to produce and sell the all-electric B2 Chassis Cab. The Bollinger B2CC is the world’s first and only Class 3 all-electric chassis-cab truck platform, and it offers unlimited work truck variants.

““The Bollinger B2 Chassis Cab’s unique features – including the 5,000-lb. payload and large energy source to power tools – make it perfect for businesses, small and large,” says CEO Robert Bollinger. “Commercial fleets will be able to reduce their overall cost of operation while buying a truck designed, engineered, and built in the USA. The B2CC is an ideal option for municipalities, parks services, emergency response vehicles, airports, construction, landscaping, electricians, plumbers, security, non-tactical military, and more.

The Bollinger B2 Chassis Cab will be built on the patent-pending Bollinger Motors E-Chassis all-wheel drive base that underpins the Bollinger B1 Sport Utility Truck and the B2 Pickup. It will be available in both 2-door and 4-door cabs and on multiple wheelbase lengths.

Features of the patent-pending Bollinger B2 Chassis Cab include:

The Bollinger B2 Chassis Cab will be made available to commercial outfitters in late 2021 in both full cab and cutaway-cab variants.