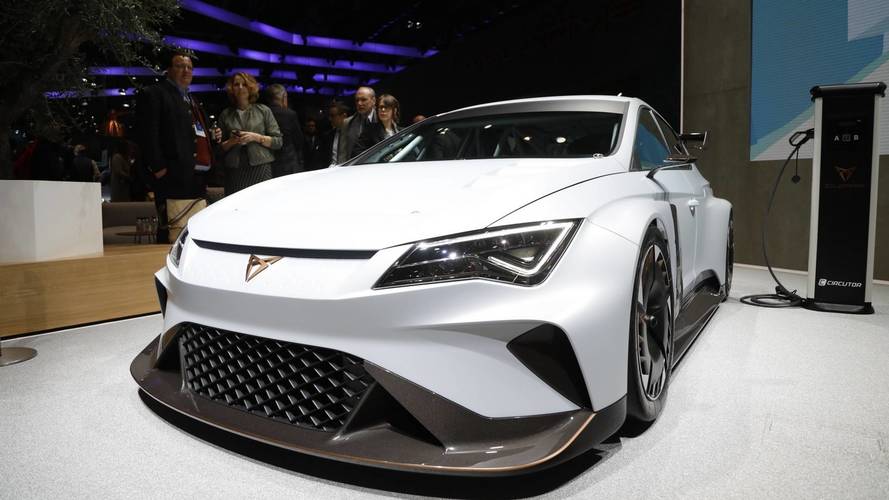 You're looking at the world's first electric touring car. Oh, and it's rear-wheel drive.

Following the unveiling of the go-faster Ateca crossover, 2018-spec TCR race car, and the Ibiza hot hatch concept, it looks like SEAT’s newly founded standalone performance brand Cupra has another surprise in store for the Geneva Motor Show. In a video presentation talking about the company’s presence at next week’s event in Switzerland, SEAT president Luca de Meo provided a sneak preview of the e-Racer.

Without going into too many details, the company’s official revealed it’s the world’s first fully electric touring car and has a continuous power output of 300 kilowatts, which works out to 402 horsepower. Peak output stands at an impressive 500 kW (670 hp).

It’s pretty obvious the e-Racer is based on the aforementioned Leon TCR touring car, but eschewing the combustion engine in favor of a pure electric arrangement. Car Throttle had the opportunity to sit down and have a chat with the vehicle’s technical director, Xavier Serra, to learn more about the zero-emissions race car.

First of all, the e-Racer has a rear-wheel-drive layout as opposed to the aforementioned Leon TCR and its FWD setup. While the latter packs 350 hp, the electric touring car gets its maximum 670-hp output from four electric motors.

Compared to the standard Leon TCR, its EV counterpart has gained more than 300 kilograms (661 pounds) and weight is now distributed 40:60 front/rear whereas the regular touring car with its front-mounted 2.0-liter gasoline engine has a 60:40 weight distribution.

Some of the energy lost goes back into the 65-kWh battery pack under braking and the driver has the possibility to choose the amount recuperated. While the front suspension has been largely carried over from the standard Leon TCR, the rear multi-link setup had to make way for a double wishbone tailored to the e-Racer.

As to what will happen with the eco-friendly touring car, it will continue to undergo testing and we might get to see it in action later this year at racing events.