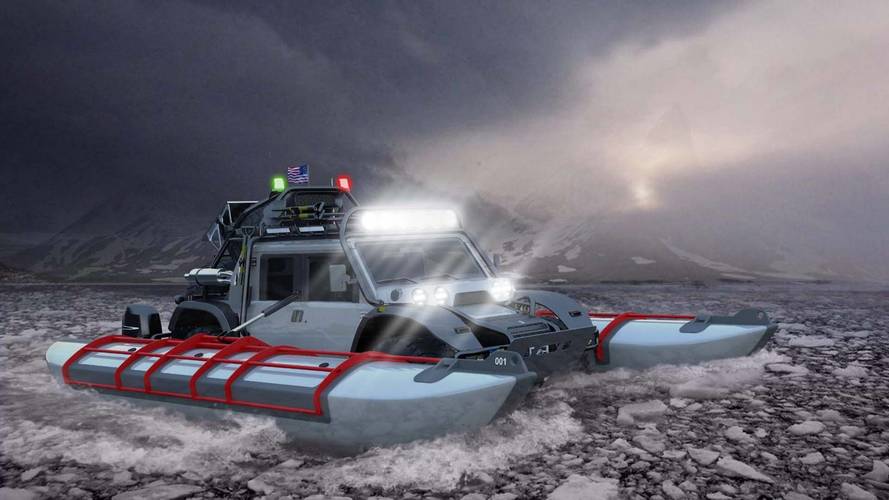 And the company calls out every other SUV manufacturer to join the adventure.

You may recall about a month ago we covered a curious off-road creation from Scuderia Cameron Glickenhaus called the Boot. Technically, it featured two off-roaders – a four-door variant of the design with the impressive name Expedition, and a two-door version called, um, Steve. Yeah, we don’t get it either, but it doesn’t really matter because SCG has gotten a bit more ambitious since then. Hidden in a recent release are a few words about a transcontinental adventure that will take the Boot from land to water.

The company’s plan to showcase the Boot’s off-road prowess was to climb the Ojos del Salado volcano (yes, volcano) in the Andes Mountains, all the way to it 22,615-foot (6,893-meter) peak. As far as we know that trip is still a go, but now there are plans in the works to drive the Boot from New York to Paris – the long way. That will obviously require more than a tall snorkel for the engine, hence the need for an amphibious Boot.

We have absolutely no information on this build or how it will power its way across the ocean. From the photo renders we received, the base looks like a fairly straightforward raft with a pair of outboard engines. Presumably, the Boot simply drives onto the platform, straps down, and sets out to break some ice. The renders places the Boot pretty much right on the water though, which would probably make for a seriously exciting – if not slightly terrifying – ocean adventure.

We shot an email to SCG for more info on the machine, but the response only talked about the proposed trip. It's tentatively slated for 2020 and will depart from Times Square in New York City. From there  the Boot heads west and doesn't stop. The water crossing will occur at the Bering Strait, which is 53 miles across at its narrowest point. From there, the Boot will trek southwest to the Road of Bones and onto the Trans-Siberian Highway. The route will pass through Beijing, Moscow, St. Petersburg, and finally end in Paris.

In the response, SCG also invited pretty much every automaker that builds an SUV to join them on the adventure. In fact, SCG even offered to buy everyone dinner in Paris.