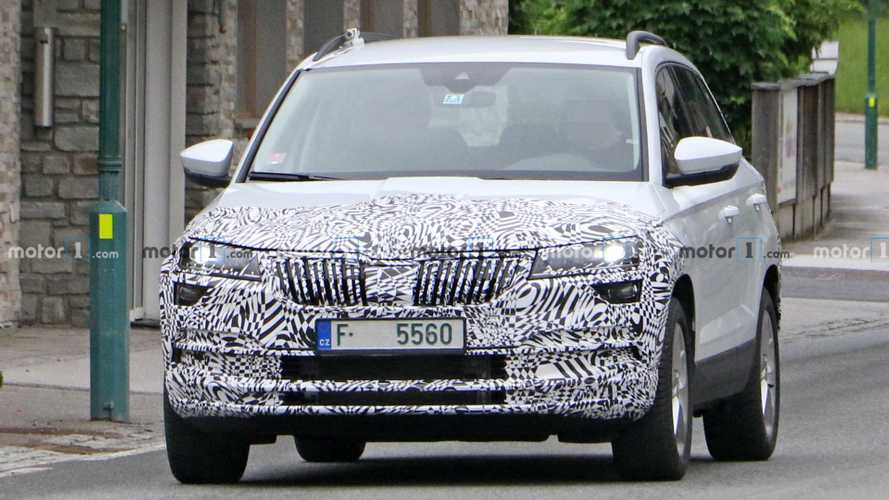 The Yeti's spiritual successor is getting ready for a nip and tuck.

The Skoda Karoq still feels like a relatively fresh compact crossover, but a quick look at the calendar reveals the Yeti’s replacement has been out for three years already. With product life cycles shrinking to 6-7 years, it only seems natural a prototype of the facelifted model has now been spied. The tricky part is trying to figure out what the Czech marque is trying to hide, because, at first glance, it looks virtually the same as today’s model.

Upon closer inspection, it would seem the front grille has a slightly different design with revised vertical slats, unless the disguise is playing tricks on us. We’ve checked all trim levels currently available for the Karoq and none of them have that front bumper design, so it’s probably due with the model’s mid-cycle update.

Get Up To Speed With Skoda's Compact Crossover:

Stay Clean With The Skoda Karoq Velo And Its Washing Machine

It would make sense for the Karoq facelift to gain optional matrix LED headlights as seen in the new-generation Octavia and the Superb facelift, but that remains to be seen. At the back, we’re not noticing any changes as the visible section of the taillights is inherited from the current model. Skoda is unlikely to give its C-segment crossover a full-width LED light bar because it would overlap with the company’s name, which is now currently spelled out across the tailgate.

The fact it was towing what looks like a dynamometer suggests Skoda was testing a new or updated engine. It’s impossible to figure out whether the Karoq had a conventional powertrain or a plug-in hybrid setup, but we won’t be too surprised if the facelift will bring an electrified version. With Volkswagen actively considering a plug-in hybrid system for the T-Roc, it seems logical Skoda might be doing the same with its sister model.

Skoda didn’t bother to camouflage the interior, which raises two possibilities – either the crossover had the current model’s cabin and there was nothing to hide or the Karoq simply won’t be getting any updates in terms of design. That being said, even if the cabin will be carried over, we’re still expecting a more sophisticated digital instrument cluster and a switch to the VW Group's MIB 3 infotainment system.

Since these are the first spy shots, the facelifted Skoda Karoq isn’t coming out anytime soon. Our guess is the updated compact crossover will be revealed at some point in 2021. There’s an old rumor suggesting a high-performance RS derivative is in the pipeline, but we wouldn’t count on it.