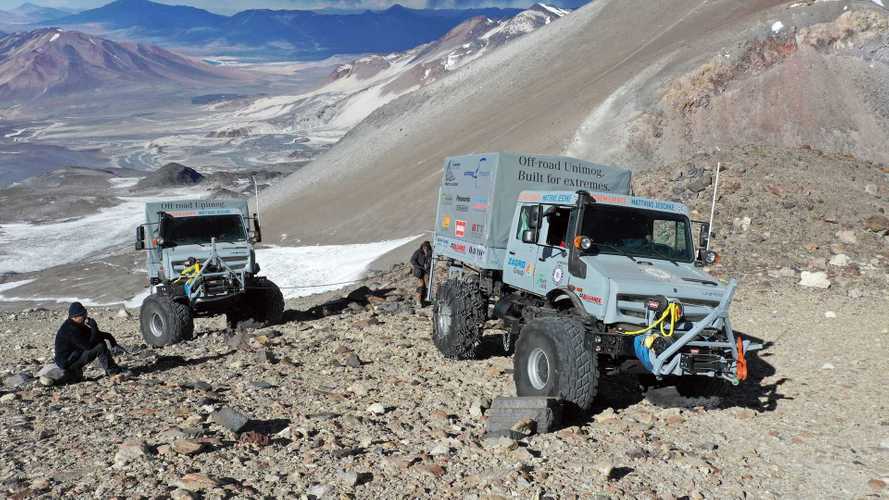 Do a routine job, break a record.

For those who like to explore and find relaxation in solitude and nature, off-roading is often the solution. While the road less travelled is often the best path to take to reach some breathtaking views and scenery, getting there is heavily dependent not just on your skill and knowledge in driving off-road, but in the capacity and limitations of your vehicle. For researchers and drivers of a ten-man strong expedition team in Chile, this is just another day on the job. Thankfully, they have some special purpose off-roaders as company; Mercedes-Benz Unimogs.

Unimogs have been in use by the military, recreational off-roaders, scientists, and motorsport teams all over the world, combining robust yet flexible powertrains and chassis configurations to meet the needs of specific users. These two Unimogs used in the most recent expedition to the second highest volcano in the world, Ojos de Salado in Chile, were manned by a team that was tasked with installing four emergency radio units at various camps on the volcanic mountain. Being the tallest active volcano on Earth, we'd agree that the installation those radio units are pretty darn important, both for mountaineers and scientific researchers. After setting up the last radio at the high-altitude camp at 6,100 meters, the next task was to set a new record for the highest altitude reached for a wheeled vehicle. One of the trucks managed to climb to 6,694, effectively taking the crown.

What Can't The Unimog Do?

Mercedes Unimog gets even cooler with railroad-ready model

The Mercedes-Benz Special Trucks division provided these two Unimo U5023 vehicles to carry the team and their gear to extreme altitudes. Special tyres, winches, and heavily modified bodies with trick variable center of gravity balancing technology were all developed by engineers from the Unimog Museum, Unimog bodybuilder AS Söder and the Unimog development team. According to the head of the expedition, Matthias Jeschke, both vehicles "mastered the extremely steep and rocky passages thanks to a combination of the best, reliable technology, a balanced centre of gravity and amazing tyre technology to bring the materials and equipment to these enormous heights. At no point in time around the world have motorised altitude expeditions taken two trucks simultaneously to such an altitude." Talk about hitting two birds with one stone.