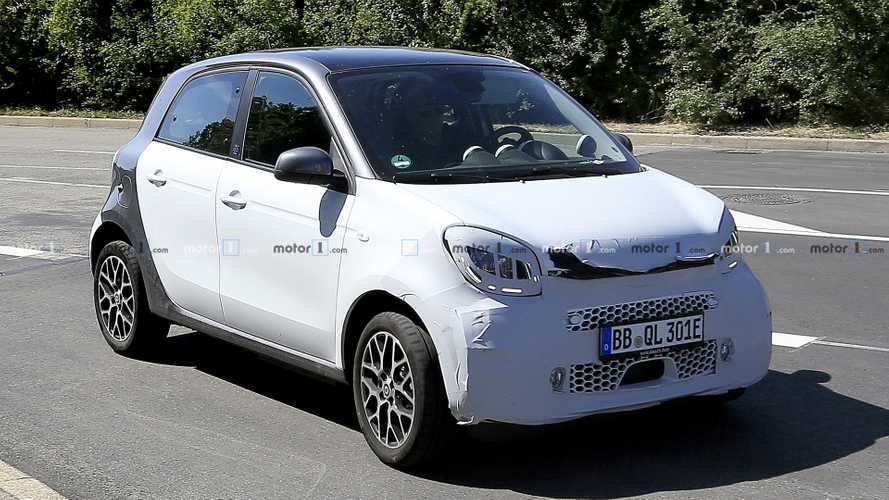 The Daimler-owned brand is kicking off its all-electric future.

[UPDATE, July 31] 13 new images have been added at the beginning of the gallery, below.

Smart will very soon become an EV-only automaker for all markets. The brand owned by Daimler will fill its entire lineup with electric vehicles and the first to come will be the facelifted version of the ForFour Electric Drive. The spy photo gallery bellow depicts the very first photos of the vehicle, taken somewhere in Germany.

As you can see, no major visual changes are planned as the vehicle will retain its overall shape, profile, and proportions. The front fascia will be tweaked but the modifications will be small – expect to see a revised grille and a slightly reshaped bumper with different air openings.

At the back, the facelifted model will carry over with its current design, save for the taillights that might get refreshed internal graphics. The parking sensors in the lower part of the bumper could be repositioned, too, but that’s nearly everything new visually we are expecting to see for the rear end.

Serving as the flagship model for the EV-only Smart, at least initially, the ForFour Electric Drive facelift should probably receive improvements to its all-electric powertrain. The current model offers a peak power of 82 horsepower (60 kilowatts) and a continuous output of 55 hp (41 kW). Thanks to a 17.6-kWh battery pack, the small four-seat vehicle can travel up to 93 miles (150 kilometers) on a single charge, depending on the drive cycle.

We expect the model to gain a slightly larger battery pack, which should give it about 124 miles (200 kilometers) between two charges. A more powerful electric motor replacing the current three-phase synchronous electric motor could also be in the works, providing a better 0-62 miles per hour (0-100 kilometers per hour) acceleration time than today’s 12.7 seconds.