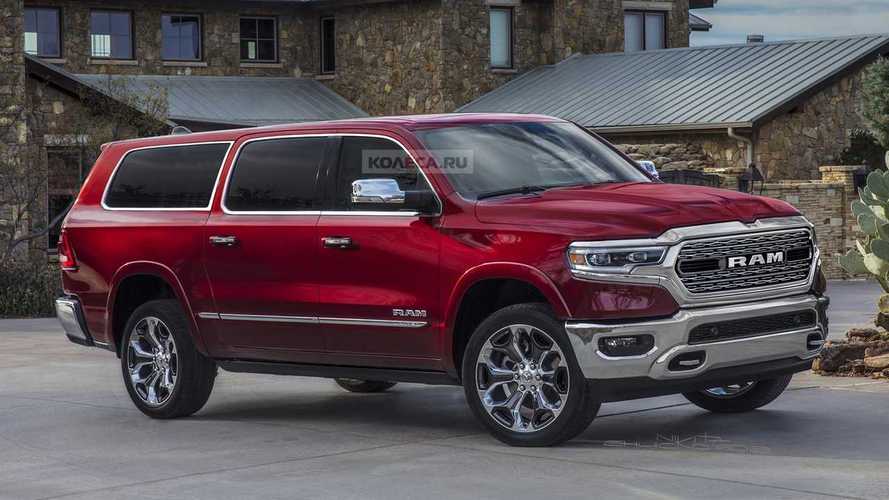 We can't believe this vehicle doesn't exist yet.

Once upon a time, Ram wasn’t its own brand but a model line within the Dodge family. The break occurred in 2009, and in the 10 years since that happened we’ve had a range of trucks and work vans, but no Ram-specific SUV. That mantle’s been carried in the FCA realm by the Dodge Durango and Jeep Grand Cherokee, but neither is a properly massive, truck-based people mover like the Chevrolet Suburban and Ford Expedition.

Enter Nikita Chuiko, a talented rendering artist who molded the new Ram 1500 into a big SUV. Frankly, we can’t believe Ram hasn’t stepped into this arena yet given the insatiable demand for such vehicles large and small. As you can see, these renderings basically drop a pickup bed topper on the 1500 Crew Cab, with some additional changes to the bed for a better-proportioned SUV look. The rear gate also incorporates a slick full-length taillight similar to what’s found on the Durango, giving it a nice tie-in to current FCA design language for sport-utility vehicles.

Neither Ram nor Dodge has ever offered a big four-door SUV like this, and the more we think about it, the more we don’t understand why. The closest we ever got was the Ramcharger, which battled the full-size Chevrolet Blazer and Ford Bronco for two-door SUV supremacy through the mid-1990s in the United States. Rumors have occasionally surfaced about the Ramcharger returning, especially with the Blazer moniker back and a new Bronco coming soon. But thus far they remain only rumors.

This Weird Ram SUV Is Real:

Meanwhile, Ford and General Motors continue to have a strong foothold in the market for folks seeking eight-passenger SUVs that still offer usable cargo space in the rear. The Chevrolet Suburban starts at $50,800, with the Ford Expedition checking in a bit higher at $52,130. Both are considerably more expensive than a base seven-passenger Durango, but we can’t help thinking buyers for the higher-spec Durango Citadel would be interested in a Ram SUV with more space and more power for a similar price.