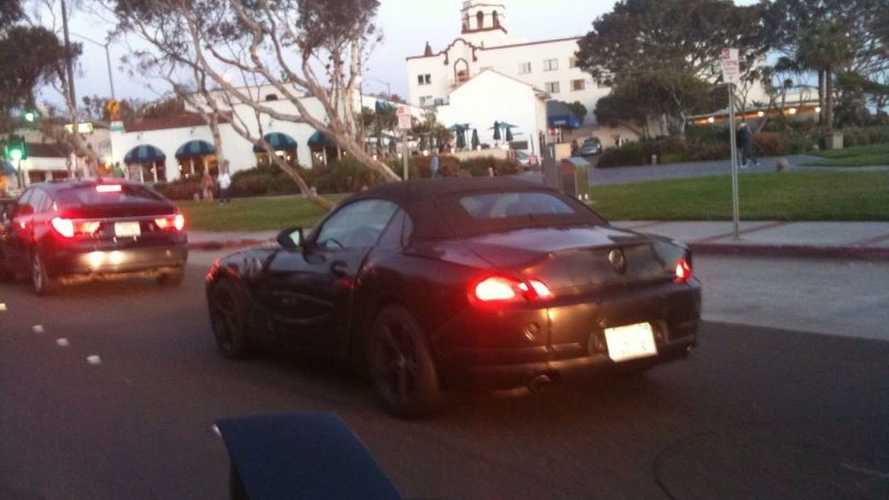 We have a pic, and a roundup of details, of the BMW Z2. Was a prototype spotted on the West Coast? Find out inside.

The first photo of an alleged BMW Z2 roadster prototype has surfaced on a Belgium website.  With rumors first originating more than 3 years ago, the photo finally confirms the development of a new Z-series car?

A Belgian expat captured the picture in Laguna Beach, California, over 100 miles away from the BMW testing facility in Oxnard.  The heavily-padded car was trailing behind a BMW 5-Series GT, but does show a few details.

The lightweight car is rumored to share a platform with the next generation 1-Series, and capped off with the soft top seen here.  It is believed that the top will be opened by hand, though a motorized top may be available as an option.  We can see the car's dual exhaust.

Over the last three years, stories of the car weighing less than 1,000 kg (2,200 lbs), and using active aerodynamics have surfaced.  It is expected to get the BMW petrol 1.6-liter engine lineup, as well as a 250+ horsepower 2.0-liter twin-turbo engine.  The car may also come as a Z2 coupe, and be available as a diesel, hybrid, plug-in hybrid, or all-electric down the road.

Look for a BMW Z2 Concept car to appear in Paris, with a production version to hit the roads by 2013.  Rumors of the car having a starting price of $30,000 could be exaggerated, since the BMW 1-Series convertible begins at $34,200.

Thanks to Ivan for the tip!