2019 DS3 Sportback Spied Inside And Out

The prototype has a combustion engine, but a fully electric model is also planned.

PSA Automobiles’ DS luxury division is gearing up to introduce the DS3 shortly after terminating the DS4 and DS5 models because of poor demand. The chic new crossover will go after the Audi Q2 and will bring a breath of fresh air into Europe’s crowded B-segment CUV market with a totally different design inside and out. Annoyingly, the prototype caught by our spies was still carrying a lot of camouflage, but at least we get to see a good chunk of the dashboard.

The diamond interior theme should be familiar to fans of the DS and the former Citroën DS-badged models and we can see the center console is significantly different than that of the larger DS7 Crossback. It has that love/hate tablet-styled infotainment system with a display a lot smaller compared to the 12-inch setup of its bigger brother.

See how we think it's going to look like: 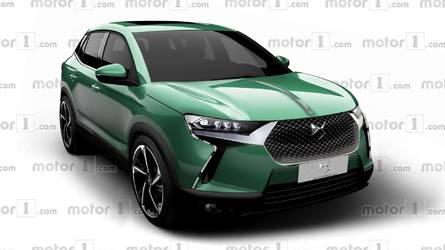 DS3 Crossback Rendered To Take On The Audi Q2

Three clusters shaped like diamonds host a myriad of physical buttons and these are joined by the central air vents mounted slightly lower on the center console. It’s certainly an interesting arrangement and gives the DS3 Crossback an avant-garde interior. We can’t quite see it, but it looks like the driver has a fully digital instrument cluster in front of him.

Stepping outside of the vehicle, the exhaust tip on the right side of the rear bumper signals the near-production prototype was powered by a combustion engine. However, DS has strongly hinted the posh crossover will be offered in a fully electric specification and we actually won’t have to wait much longer to see it. The EV will premiere in the weeks or months to come, prior to showing up in the metal at the Paris Motor Show early October. The zero-emissions variant will allegedly come with a 50-kWh battery pack with enough juice 280 miles (450 kilometers).

The DS3 Crossback is scheduled to go on sale in 2019 and will be one of the four crossovers the PSA’s premium arm will have by 2021.