Cadillac caught a lot of flack for the CT5-V. Fans were not happy that a 360-horsepower car was replacing (nominally at least) the beloved 640-horse CTS-V. But the problem wasn't so much that the two cars were light years apart in terms of performance, it's that Cadillac didn't tell everyone about the restructuring of its performance portfolio – at least not right away.

It came out later that Cadillac's V models would now rival Audi's S line and the Mercedes-AMG 53 range, while newly minted “Blackwing” vehicles would act as the brand's powerful range-toppers. Whether or not the new naming strategy actually makes sense, Cadillac is sticking with it for the time being.

With that out of the way – the 2022 Cadillac CT5-V Blackwing is the fastest, most powerful, and by our measure, the most bonkers vehicle the company has ever built. Cadillac invited us to Virginia International Raceway to sample its new super sedan, where we got a chance to experience that immense power firsthand.

People criticize the CT5 for looking too generic. And sure, this car is a bit bland in base form with its odd front fascia and a gloss black kink on the c-pillar that draws comparisons to the Honda Accord. But something about the styling of the CT5-V Blackwing absolutely works. Designers added necessary aggressive touches to the exterior without going overboard.

The front end looks tougher with larger outboard vents, wider lower openings, and a unique V-shaped mesh in the grille that sends more fresh air to the now-larger engine. Standard carbon fiber splitters line the front bumper and side skirts, while opting for the Carbon Fiber 1 package ($4,100) adds bigger splitters all around and the Carbon Fiber 2 package ($5,230) includes everything you get on the CF1 package, but tacks on a sharp carbon fiber spoiler in the rear.

Something about the styling of the CT5-V Blackwing absolutely works.

The CT5-V Blackwing's color palette is absolutely perfect, too. Summit White and Raven Black are the only two no-cost hues, but it's worth shelling out the extra $625 for paint like Blaze Orange Metallic or Electric Blue (pictured here). If you're really feeling saucy, the $3,925 Dark Emerald Frost matte paint looks stunning in person.

Pair any of those paint jobs with one of three 19-inch wheel options. The base shoes are a simple silver-over-black rim with 10 spokes, while the $600 mid-level set is subtle too, with a graphite finish. But the $1,500 Tech Bronze, snowflake-patterned wheels (similar to the CT4-V Blackwing) are beyond cool, and look especially good with that optional matte green. Also worth keeping in mind? Cadillac will introduce an ultra-light magnesium wheel as a late-availability option. 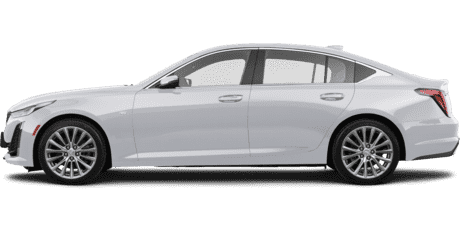 The Blackwing comes with standard 18-way adjustable performance seats, which are a notable upgrade over the less bolstered thrones in the CT5-V. For track driving, however, you want the high-performance buckets, which cost $2,890 with standard leather upholstery or $6,090 with semi-aniline hides.

With a prodigious 668 horsepower and 659 pound-feet, the CT5-V Blackwing certainly feels like the highest-output production Cadillac in history. Technically, the CT5's hand-built, supercharged 6.2-liter V8 is an updated version of the outgoing CTS-V's motor, but the CT5 outmuscles the old guard by 28 horses, 29 lb-ft, and three-tenths of a second to 60 – not to mention it tops out north of 200 miles per hour.

That extra oomph manifests itself the second you lay your foot on the throttle – the CT5 pulls heroically on its way to a supercar-rivaling 60 time of 3.4 seconds (or 3.6 seconds with the manual) with launch control. You won't find many four doors that feel this ferociously quick and utterly smooth off the line. The CT5-V Blackwing doesn't hit you over the head like a Dodge Charger Hellcat, rather, this car employs all of its power with unmatched fluidity.

With a prodigious 668 horsepower and 659 pound-feet, the CT5-V Blackwing certainly feels like the highest-output production Cadillac in history.

Down the front straight of VIR, the CT5 easily touches 140 miles per hour before we have to go hard on the brakes. Even at those speeds, the Caddy seemingly still has lots of juice; the only thing keeping it from continuing on to its 200-plus mph top speed is lack of pavement.

Flinging it into the first turn, the Blackwing presents plenty of grip. The Michelin Pilot Sport 4S tires (275/35Z front, 305/30Z rear) feel utterly connected to the tarmac after a few warm-up laps, while the enhanced electronic limited-slip differential keeps the CT5 from kicking out too much. Although the CT5-V Blackwing is the only vehicle in its class with rear-wheel drive only, it doesn’t long for grip like you might expect.

At velocity, the 10-speed automatic ticks through gears with unbelievable quickness and precision – perfect for attacking VIR. But as in the CT4, the auto still feels sluggish puttering around town. The six-speed manual remains the gearbox to get if you plan on driving it daily – it's crisper and more tactile, with a satisfying mid-range throw that allows you to shove into gear easily without much thought.

Rev-matching and no-lift shifts both come standard too, and the duo makes flinging the six-speed simpler and more fun. We spent far more time than necessary dropping into third, letting the revs build, and yanking the microfiber-coated shifter down to fourth without lifting off the gas. Hilarious, especially in a 668-horse vehicle.

Standard Magnetic Ride Control (MRC version 4.0) combined with the already good Alpha platform makes the CT5-V Blackwing supremely capable when the going gets twisty, which it tends to do at VIR. Through the speedy S-turns early on in the course, the Blackwing exhibits fluid, smooth body movements that allow us to hustle the car with haste. The steering is perfectly taut, too, which makes it easy to accurately position this otherwise large-ish vehicle into the next turn. And if you're brave enough (we're not), the CT5-V Blackwing will pull up to 1.01 Gs in a corner.

But even in its most wound-up Track mode, the CT5-V Blackwing doesn't feel tight enough. Although Cadillac boasts an 11 percent upgrade in rigidity over the regular V series, you still notice lateral body movements that you might not in a BMW M5 Competition or Mercedes-AMG E63. There’s some obvious squishiness in the suspension as well, and a big transfer of mass that drops the nose downward on hard braking. Maybe the brakes are just too good...

The Blackwing's standard cast-iron stoppers are bigger than what the base CT5-V offers, with the six-piston front rotors measuring in at 15.7 inches and the four-piston rear rotors are 14.7 inches. But if you plan to track this car regularly, the $9,000 carbon-ceramic brakes are worth the steep asking price. These stoppers are among the best we've tested, with a perfectly tuned pedal that makes it easy to modulate pressure both on track and around town. Honestly, we’d be hard-pressed to choose between these and the carbon ceramics on the $325,000 Mercedes-AMG GT Black Series.

Jumping off the track and onto the narrow public roads around VIR was fine enough to get a feel for the smaller CT4 the day prior. But honestly, these backroads don't do a super sedan like the CT5-V Blackwing justice. We need a properly fast, twisty canyon trail like Angeles Crest Highway to get a better impression of the Blackwing in public. But there are a few clear takeaways from our time with this car on the streets.

MRC shows its Jekyll-and-Hyde persona by taming the Blackwing around town. This car’s ride is comfortable and compliant, yet borderline soft for something with 668 horses underhood. Lightweight and boosted still make up the basic formula for the steering (as with the CT4-V Blackwing), but the CT5 provides better feedback from the road to your fingertips. Track mode is still the superior setup for the most steering and suspension feel, properly weighting up both.

This car’s ride is comfortable and compliant, yet borderline soft for something with 668 horses underhood.

Keeping this car in Comfort mode also subdues the supercharged V8 to usable levels. It only feels a touch more aggressive than the standard CT5-V on the road, but you can still have plenty of fun snickering the six-speed gearbox while using only a fraction of the available power on tap.

Driving around town also gave us the opportunity to fiddle with some of the interior electronics. The same basic formula from the CT5-V carries over, but now the central 10.0-inch touchscreen is joined by a 12.0-inch digital instrument cluster with V-specific graphics that look extremely pretty, as well as a crystal clear head-up display that projects basic information up onto the windshield. Features like wireless Apple CarPlay and Android Auto also come standard, as does a new AKG premium audio system with 15 speakers.

End Of The Road

The Cadillac CT5-V Blackwing starts at a cool $85,985, including $995 in destination fees. Whereas the CT4-V Blackwing felt a bit pricey for its class, the CT5-V Blackwing undercuts alternatives from Audi, BMW, and Mercedes-Benz by a significant margin. The Audi RS7 starts at $114,500, the BMW M5 costs $103,500, and the Mercedes-AMG E63 S sedan asks $107,500. The German alternatives are all pricier and less powerful, but they will get to 60 quicker than the Caddy thanks to standard all-wheel drive – so there is some give and take.

2022 Cadillac CT4-V Blackwing First Drive Review: Out With A Pop

Sure, you will have to make minor concessions in pursuit of speed. The CT5-V Blackwing only achieves 16 miles per gallon combined, for example, and cargo room is a measly 11.9 cubic feet, which is worse than any other car in the class. But neither of those minor inconveniences are reasons to avoid the CT5-V Blackwing – not in the slightest.

In the age of SUVs and crossovers and with the onslaught of electrification, the Cadillac CT5-V Blackwing is a proper sendoff for a car that, let’s face it, was doomed from the start. It’s comfortable when you need it to be, yet blisteringly quick and capable as all hell, all while looking good doing it. So while we embrace the future and all that Cadillac has planned, we’re certainly going to miss cars like this.