The M5 Competition is comfortable, refined, and quick as hell.

The 2021 BMW M5 Competition is, simply put, one of the fastest cars we've ever driven. Not just one of the fastest sedans, either – this thing is up there with McLaren, Ferrari, and Porsche in terms of straight-line speed. And the numbers support it: 60 miles per hour happens in 3.1 seconds, 124 mph happens in 10.8 seconds, and flat out, the M5 Comp will hit about 190 mph – and that’s with electronic limiters. It’s absurd.

The secret to that extraordinary oomph is what's hiding under the hood: BMW's very good twin-turbocharged 4.4-liter V8. That same engine adorns other models like M8 Competition and X5 M Competition – two vehicles we've praised extensively for their abilities off the line – but the M5 Competition is easily our favorite of the bunch.

Not only is the M5 ridiculously quick, but it's also refined, loaded with tech, and handsome comparatively. Thankfully, BMW decided against the awkward vertical grilles of the new M3 and M4 (even though this schnozz does grow slightly compared to last year). The company does ask quite a lot for its fastest sedan – $111,100 to start – but that feels like a small price to pay for a car this good.

A vehicle’s ratings and verdict are relative only to its own segment and not the new-vehicle market as a whole. For more on how Motor1.com rates cars, click here.

Unlike some other fast sedans, the BMW M5 Competition is very understated. This is not a car that will draw crowds at the grocery store, and frankly, we sort of like it that way. The only evidence that there's a twin-turbocharged V8 lurking underhood is the blacked-out grille the matching M5 badge embedded within it, plus the trio of large lower vents for additional cooling. And, yes, the M5's kidney grille is slightly larger this year, but it's nothing offensive.

Outside of that, the M5's headlights – lightly updated for 2021 – are marginally different from what you get on the traditional 5 Series, as are the darkened taillights, and the 20-inch Y-spoke wheels are unique, but not overbearing. Our car also wears a $3,600 Frozen Metallic paint job, the most expensive hue of the 12 available colors. The matte finish is nice, but it does tend to attract dirt spots easily. And of course, you can't take this car through a traditional car wash for fear of ruining the expensive finish.

The M5 Comp isn't all that different from the traditional 5 Series inside, either – not that that's a bad thing. The general layout consists of the standard model’s same dual 12.3-inch screens and basic dash design. But the M5 gets sportier Silverstone Leather buckets (a welcomed $3,600 option), a new Alu Carbon trim on the dash, and “M” badges dotting the steering wheel, footwells, floor mats, and seats. 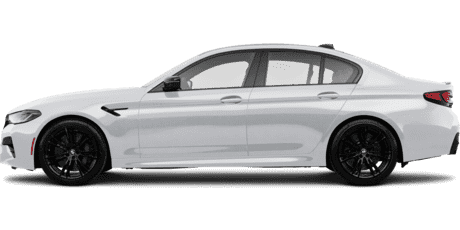 The optional Silverstone Leather buckets in the M5 are simply fantastic. They contour perfectly to the driver's frame, with impressive bolstering for on-track shenanigans and ample back and butt support for long-distance cruising. There's lots of headroom and legroom, too, with a solid 40.7 inches and 41.4 inches, respectively. Those figures are nearly better all-around compared to cross-shopped options like Audi RS7, Dodge Charger Hellcat, and Mercedes-AMG E63 – only the Charger has slightly more room for feet (41.8 inches).

The rear bench matches the cushiness of the front buckets and offers great long-term support. None of the cars in this class excel in rear passenger volume, but the M5's second row is solid; the 38.5 inches of headroom are better than Charger and E63, and the 36.5 inches of legroom are slightly better than Merc. The Charger is still the legroom king, though, with 40.1 inches.

Our only complaint with the M5 Comp is ride quality. The lower ride height, stiffer springs, and stronger anti-roll bars over the standard M5 means that even in Comfort mode the ride can be harsh. The optional 20-inch wheels and ultra-thin Pirelli P Zero tires don't help, either.

The staple of any modern BMW interior is what the company calls its “Live Cockpit Pro.” That setup comes standard on most high-end BMWs like the M5 – and as an option on other lesser models – with things like navigation, Wi-Fi, gesture control, a head-up display, the “Hey BMW” voice assistant, and wireless Apple CarPlay and Android Auto all standard.

In the past, we've had issues with BMW's wireless Android Auto and Apple CarPlay connections. In our tests of the X5 M Competition, X7, and 3 Series specifically, the system would either disconnect at random or refuse to connect at all. Thankfully, BMW seems to have addressed those previous qualms here – wireless Android Auto connected seamlessly and never stopped working during our week.

Housing those features is a sharp and fast 12.3-inch touchscreen running the latest iDrive 7.0 infotainment system. This setup is very easy to parse, with a well-designed home screen layout and a rotary dial (located just next to the gear shifter) that makes it all simple to navigate – even CarPlay and Android Auto. 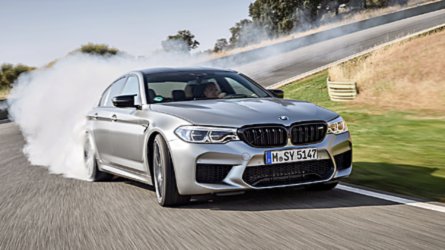 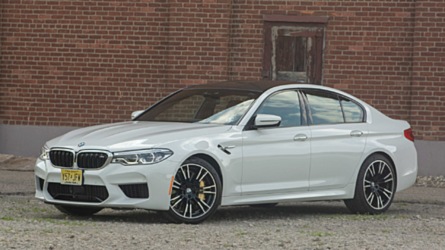 The M5 Competition is one of the quickest cars we've ever placed our butts in (and it's not even the quickest version). BMW's twin-turbocharged 4.4-liter V8 is as phenomenally good here as it is in every other application, producing 617 horsepower and 553 pound-feet, routed through a seamless eight-speed automatic. That's 17 more horses than you get on the standard M5.

Off the line, the M5 Comp feels like it's spring-loaded. An instant shove of torque aided by the two quick-spooling turbos propels the M5 to 60 miles per hour in a manufacturer-estimated 3.1 seconds (with launch control). The standard xDrive all-wheel-drive and super sticky Pirelli P PZ4 afford the M5 impossible levels of grip, shoving you and your four passengers firmly in the seatback on the way to that three-second 60 time. You'd never be able to get a Charger Redeye off the line that quickly, even with the stickiest rubber.

The M5 Comp is an outstanding companion in the corners, too. On the few highway onramps where we could flog it, the Competition's stiffer springs and retuned adaptive dampers (versus the normal M5) yield impressive results, and the steering is perfectly weighted in all drive modes. This car is flat and smooth, and it rotates like a well-balanced top in tight corners – defying what the M5’s 4,262-pound curb weight and the laws of physics might suggest.

But we have a slight issue with the drive mode settings. The two red M Dynamic buttons atop the steering wheel – labeled “M1” and “M2” – are customizable, which is great. We set ours to Sport and Sport Plus for quick access to the most aggressive modes. But digging into the iDrive screen and attempting to save those settings is a task in itself. There are too many menus to sort through, and once there, you have to manually tick over every setting – traction control intensity, spring rate, steering input, etc. For the average consumer, it all feels like a bit too much.

Features like forward-collision warning, automatic emergency braking, lane-departure warning, lane-keep assist, and adaptive high-beam headlights all come standard on the BMW M5 Competition. And these systems are nice to have out of the box, especially considering some of the alternatives don’t offer nearly as much. But it’s the $1,700 Driving Assistance Plus package (equipped here) that you really want.

The M5’s optional active safety suite adds traffic jam assist – also known as full-speed adaptive cruise control – and the Active Driving Assistant Pro, which is one of the best driving assistance features out there. Press the button on the steering wheel and the M5 stays perfectly centered in the lane thanks to regular steering inputs from the system, and it maintains a steady distance to the car in front of it with smooth braking all the way down to zero. We’ve said this previously, but it’s still true: BMW’s active safety is excellent and only marginally behind alternatives like Cadillac Super Cruise and Tesla Autopilot.

If you’re buying a 617-hp BMW, fuel economy probably isn’t a top priority. And with just 15 miles per gallon city, 21 highway, and 17 combined, the M5 Comp certainly isn’t a fuel sipper. But hey, at least isn’t the worst option in the class – that honor goes to the Dodge Charger Hellcat Redeye, which achieves just 12 mpg combined. The E63 S is still the most “efficient” of the bunch, returning 18 mpg combined, or you can go fully electric and get a Tesla Model S Plaid.

After a laundry list of options, our tester has an eye-searing asking price of $139,645. The most expensive add-ons are the $8,500 carbon ceramic brakes, followed by the $7,600 Competition package itself. Just below that is the $3,600 Frozen Metallic paint job, the $3,500 full Silverstone Leather interior, and the $3,350 Executive Package – which adds soft-close doors, rear sunshades, as well as heated and ventilated seats. Plus there are a handful of other less expensive options that hike the price.