Porsche’s range-topping sedan captures more of the 911’s charms than ever before.

As a luxury-cum-sport sedan, the 2021 Porsche Panamera Turbo S, is impeccable. It's as fast as it is comfortable, as agile as it is plush, and filled to the brim with the kind of character a 911 has in spades.

But after 300 miles in the new Turbo S, the one thing that stuck with me is just how intoxicating this big sedan is when Porsche's engineers go buck wild with the suspension. Packing literally every performance item in the Panamera's options catalog save for one (a sport exhaust) as standard, the Turbo S handles in a way few four-door sedans ever have. Size doesn't matter. Weight doesn't matter. The only thing the Panamera Turbo S concerns itself with is whether the driver has the courage to exploit its stratospheric capabilities.

At 16.6 feet long and tipping the scales at 4,700 pounds, the Panamera Turbo S is a big, heavy vehicle, but you'd never know that from the way it corners. In addition to the standard Porsche Active Suspension Management (PASM) you'll find on every Panamera, the Turbo S adds active anti-roll bars (Porsche Dynamic Chassis Control, or PDCC), rear-axle steering, and Porsche Torque Vectoring Plus as standard. Turbo S models get no-cost carbon-ceramic brakes too, featuring 16.5-inch front and 16.1-inch rear discs, so you can control the immense speed in a sudden and fade-free manner.

All of the above are transformative pieces of technology. Rear-axle steering effectively shortens the 116.1-inch wheelbase, tightening the Panamera's turning circle and giving it a more direct, assertive character at turn-in. Along with PDCC, which eliminates body roll, the Panamera Turbo S is darty and sharp when entering a corner. In fact, the Turbo S feels almost too aggressive in the way it turns, at times – these systems hide the car's mass, but can't make 4,700 pounds go away entirely.

The Panamera Turbo S is a big, heavy vehicle, but you'd never know that from the way it corners.

On more than a few occasions, I found myself having to back off when entering corners. The car's systems gave me such an extreme and unshakeable sense of confidence that I began to forget that if something went wrong, my chances of reacting and recovering were nil. That's the sort of effortless performance the Turbo S packs – a cornering character that seemingly bends the rules of physics to make even mediocre drivers (Hi!) attack corners with a perhaps-overstated certainty of their own competence. And in the hands of a talented driver, it can crush Nurburgring lap times.

At the same time, that long wheelbase, rear-axle steering, and standard PASM system provide an impressively plush ride when cruising. During my time with it, the Panamera made Michigan's poor roads irrelevant. That's despite standard 21-inch wheels with miniscule tire sidewalls (275/35s in front and 325/30s in back). You could happily cross a country in this car thanks to its comfort and do so easily thanks to the incredible straight-line stability from the rear-axle steering.

Shortcomings? There are a couple, but they're negligible. The steering is quick, to the point that I found myself having to reacclimate to the Porsche's ability to suddenly change directions. But while that's great, the Panamera is light on feedback through the wheel. Also, and this isn't a Porsche-specific problem, the brake pedal for the carbon-ceramic stoppers is difficult to modulate at low speeds, making gradual stops a jerky process. That said, the brakes provide incredible power when stopping at high speeds and felt quite good through the pedal. And thankfully, Porsche eliminated the squealing inherent in lesser carbon-ceramic setups.

Sadly, I think most Panamera Turbo S shoppers are interested in straight-line speed rather than cornering. The car won't disappoint these philistines. With 620 hp and 604 pound-feet of torque – increases of 70 hp and 37 lb-ft from the old Turbo – from a twin-turbocharged 4.0-liter V8, this is hands-down the fastest four-door Porsche around (for now).

Aided by a standard eight-speed dual-clutch transmission and torque-vectoring all-wheel drive, the sprint to 60 miles per hour takes just 2.9 seconds. That’s two-tenths of a second ahead of the Mercedes-AMG GT63 S Four-Door, a vehicle I once called “the best, most complete four-door performance vehicle in the world.” Keep pushing and the Panamera will carry on to 196 miles per hour.

This is hands-down the fastest four-door Porsche around (for now).

But numbers are silly – you need to feel the relentless pull of the Panamera as it accelerates to understand this vehicle. Its effortless speed makes you feel like the king of the highway, with the dip of a toe calling on the eight-speed to drop a gear as the turbochargers quickly spool up to force-feed Volkswagen Group's communal 4.0-liter engine. There are no peaks or valleys, nary a hint of histrionics in this engine's performance – it's nothing but a brutal, inexhaustible source of speed and sound.

While I often complain about performance cars being quiet, that isn't the case with the Panamera Turbo S. With the optional Sport Exhaust engaged, the Panamera Turbo emits a rich, powerful sound that's perfectly fitting for a vehicle of this type. Moreover, the volume level is perfect, enough that it gets you excited when accelerating hard, but not so obnoxious that you can't cruise with the louder setting engaged.

There's plenty of extra power here, but Porsche didn't simply turn up the boost. The Panamera Turbo S' 4.0-liter features new pistons, connecting rods, and an improved crankshaft. The turbines in the turbochargers are new, too. The compression is lower, from 10.1 to 9.7:1, while the fuel injectors get a higher flow rate and the spark plugs an increased platinum content. This engine is common in a number of Audi, Porsche, Bentley, and even a lone Lamborghini, but there are few vehicles in the VW Group that have such a potent variant under the hood.

But what hasn't changed is the eight-speed dual-clutch transmission. A member of Porsche's sublime PDK family, this gearbox comes from last year's Panamera Turbo S E-Hybrid, a 677-hp plug-in that Porsche will update by early 2021 at the latest. In other words, it's built to withstand more than even the twin-turbo 4.0-liter can manage, so there was no need to reinforce it. he Turbo S does get a tweaked calibration to better manage the power, and boy, what a job it does.

With the optional Sport Exhaust engaged, the Panamera Turbo emits a rich, powerful sound that's perfectly fitting for a vehicle of this type.

Upshifts are immediate and downshifts nearly as quick. Operate the wheel-mounted paddle shifters – smallish metal things that have an okay action – and accelerating is even more engaging. But left to its own devices and with the wick turned down to a reasonable level, the PDK remains an excellent transmission. Porsche engineered out all the old dual-clutch issues and, in the process, created a transmission that will please average drivers as readily as those with a taste for performance.

What Else Do You Get?

The addition of the Turbo S trim for 2021 is the big news, but there are a smattering of other updates as part of what Porsche is classifying a mid-cycle refresh for its only sedan. As is typical for Porsche, changes to the attractive design and styling are barely perceptible. The broader range receives the previously optional Sport Design fascia as standard, while the Turbo S gets a unique design with more prominent front air intakes.

Every model gets a tweaked rear light strip, which now spans the width of the car without a seam in the middle. There are some additional wheel options and new paint shades, such as my tester's eye-catching Papaya Metallic finish. But if you're walking into your local Porsche showroom expecting a substantial rework, the 2021 might disappoint you.

save over $3,400 on average off MSRP* on a new Porsche Panamera

Ultimately, it's the addition of the Turbo S trim that marks the biggest change for the 2021 Panamera line. But while the 620-hp sedan soaks up the spotlight, we're still several months away from the car's on-sale date, and as such, we don't know exactly how much it will cost. Whatever the figure, though, affordability is not the name of the game.

The 2020 Panamera Turbo starts at $153,000, while the Turbo S E-Hybrid range requires at least $187,700. Porsche has already confirmed that a new Turbo S E-Hybrid is coming and that it will be the most powerful member of the Panamera family, so we can safely assume that the Turbo S' starting price won't exceed the current king of the hill's.

If we look to the 911 range, we see $32,700 separates the standard Turbo from the Turbo S – if the Panamera takes a similar approach, we'd be looking at $185,000 for the Panamera Turbo S. That doesn't seem outside the range of possibility, especially if Porsche increases the plug-in's price by a few thousand dollars. 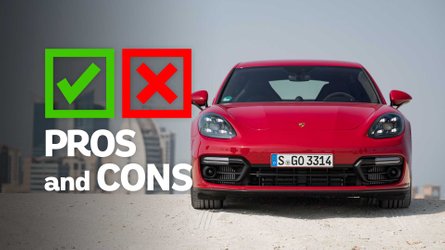 Whatever the price ends up being, it's hard to see the Panamera Turbo S being anything other than worth it… mostly. The reality is that aside from its dynamite engine, you can get all the amazing suspension equipment as options on lesser models, including the 4S, GTS, and standard Turbo (sorry base shoppers, but PDCC, the system that makes arguably the biggest difference to the Panamera's cornering character, isn't available on the standard rear- or all-wheel-drive variants).

Ultimately, the Turbo S' biggest problem is that it proves quite effectively how good the overall Panamera platform is when properly optioned. Power-hungry shoppers will love it, but for everyone else, it's worth knowing that there's a lot more to the Panamera experience beyond sheer speed.