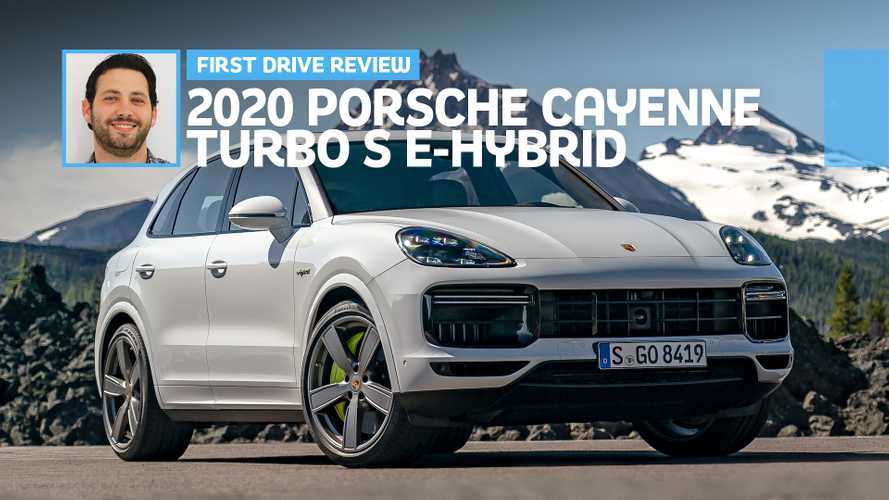 The 2020 Porsche Cayenne Turbo S E-Hybrid follows a simple recipe: take one part Cayenne Turbo, another part Cayenne E-Hybrid, and stir. The resulting dish is a monstrous concoction that marries the 541-horsepower twin-turbocharged 4.0-liter V8 of the Turbo with the efficient and torque-rich 134-hp electric motor of the E-Hybrid to net a peak output of 670 horses. Even Dr. Frankenstein might think the Turbo S E-Hybrid is a bit much.

That’s not an ill-informed assessment, either, as the standard Cayenne Turbo offers more grunt than any crossover consumer reasonably needs. It’ll accelerate to 60 miles per hour in a manufacturer-claimed 3.7 seconds with launch control engaged and make its way on to a top speed of 177 mph. Those are Boxster-beating figures from a nearly two-and-a-half-ton mid-size crossover SUV. The Turbo S E-Hybrid, then, is less of a response to a white space in the high-performance crossover marketplace and more of an exercise in excess.

Predictably, the Turbo S E-Hybrid is an absolutely savage instrument in a straight line and its 683 pound-feet of torque provide a brutal kick in the gut with each and every launch-control-induced acceleration run. Despite the all-wheel-drive crossover’s sticky Pirelli tires momentarily slipping at takeoff, the top-of-the-line Cayenne rockets to 60 mph in a manufacturer-estimated 3.6 seconds. Hold the right pedal down long enough and the Turbo S E-Hybrid tops out at 183 mph, while its standard air suspension automatically hunkers down to the second-lowest of its six ride-height settings once the crossover hits 131 mph (the lowest setting is specifically for loading and unloading items from the hatch).

That straight-line speed comes at a cost, though, and the 14.1-kilowatt-hour lithium-ion battery pack that lives below the rear cargo floor, as well as the electric motor that’s sandwiched between the eight-speed automatic transmission and V8 engine, adds extra heft to the Cayenne’s curb weight. A featherweight, the Turbo S E-Hybrid is not.

To compensate for the model’s additional pounds, Porsche equips the Turbo S E-Hybrid with a host of performance bits that it charges extra for in the lesser Turbo. This includes a torque-vectoring rear end, active anti-roll bars that rely on a 48-volt electrical system to quickly connect and disconnect as conditions deem fit, and massive carbon-ceramic brake rotors – measuring 17.3 inches up front and 16.1 inches at the rear – clamped down by sturdy 10-piston front and 4-piston rear calipers finished in Acid Green paint.

In conjunction with a set of 22-inch Pirelli summer tires (21-inch wheels and tires come standard) and the air suspension’s active damping, the hefty Turbo S E-Hybrid takes turns and sheds speed with unexpected enthusiasm. It’s not as lithe as the smaller Macan Turbo, but the gasoline-electric Porsche crossover is far nimbler than its size suggests.

It’s not as lithe as the smaller Macan Turbo, but the gasoline-electric Porsche crossover is far nimbler than its size suggests.

Yet, there’s a distinct disconnect between the vehicle and the driver that stems from the Turbo S E-Hybrid’s overwhelming dependence on electronic wizardry to go fast. That doesn’t make this Porsche any less fun to hound on; just a little less rewarding. Thanks to its near-perfectly weighted steering, high levels of lateral grip, and quick reactions from its clairvoyant gearbox and associated steering-wheel-mounted paddle shifters, the $161,900 Turbo S E-Hybrid is absolutely thrilling to drive on open roads. That said, the lighter Cayenne Turbo offers much the same thrills for nearly $35,000 less (add on the Turbo S E-Hybrid's standard performance kit to the Turbo and that figure falls to around $25,000).

Once off the snaking back roads that stretch between Sisters, Oreg. and to Eugene, however, the Turbo S E-Hybrid plays its trump cards: its all-electric E-Power and efficiency-minded gasoline-electric Hybrid Auto drive modes. The two drive settings complement the racier Sport and Sport Plus modes, the former of which ensures the battery pack maintains the minimum charge required in order to offer ample boost from the electric motor, while the latter works to charge the battery pack as quickly as possible to guarantee the electric motor consistently supplements the V8 engine with its full performance potential. Additionally, Porsche equips the gasoline-electric crossover with E-Hold and E-Charge settings, which maintain the battery pack’s state of charge or use the gas engine to add juice on the go

In E-Power mode, the Turbo S E-Hybrid relies exclusively on the power of the electric motor for momentum. Although the Environmental Protection Agency (EPA) has yet to release range or fuel economy estimates for the model, we expect the Turbo S E-Hybrid to offer more than 20 miles of emissions-free driving with a full charge.

Due to insufficient charge to the battery pack, we were unable to use the model’s E-Power setting. Nevertheless, we imagine the Turbo S E-Hybrid drives much like the standard E-Hybrid trim in its all-electric driving mode. That means adequate acceleration off-the-line thanks to the electric motor’s 295 pound-feet of torque, but rather ho-hum performance at higher speeds. Fortunately, pushing past a detent in the accelerator pedal or twisting the steering-wheel-mounted drive mode switch brings the crossover’s burly twin-turbocharged V8 engine online for quicker acceleration.

In truth, Hybrid Auto provides the best combination of power and efficiency for day-to-day driving. Of course, efficiency is a relative term, and it’s unlikely the Turbo S E-Hybrid will significantly improve upon the Turbo’s EPA-rated fuel economy figures of 15 miles per gallon city, 19 mpg highway, and 17 mpg combined. Even so, the Turbo S E-Hybrid never feels short on grunt in Hybrid Auto, and the switchover from the electric motor to the gas engine is so seamless that the rise and fall of the crossover’s Acid Green tachometer needle and the status of the power-flow meter are just about the only signs that these two power sources are constantly juggling accelerative responsibilities.

The switchover from regenerative to mechanical braking is less impressive, as the grabby left pedal makes it difficult to smoothly initiate braking. Particularly at lower speeds.

Is It Worth It? Let Me Work It

This isn’t the Turbo S E-Hybrid’s only demerit, as the model suffers from typical Cayenne issues such as touch-capacitive center console controls that are difficult to decipher by feel alone and a 12.3-inch touchscreen infotainment system that includes a barrage of overcomplicated and confusing menus.

Additionally, the Turbo S E-Hybrid lacks sufficient external differentiation from its less outrageous, but still extraordinary, Turbo sibling. Check the box for the no-cost yellow brake calipers, and the trim-specific badging and rear-fender-mounted charge-port door are just about the only giveaways that this is Porsche’s flagship Cayenne.

Much like Frankenstein’s monster, the 2020 Porsche Cayenne Turbo S E-Hybrid is an extraordinary experiment of questionable purpose. Given the almost trivial difference in straight-line acceleration between the Turbo S E-Hybrid and the Turbo, it’s difficult to justify the significant price disparity between the two models.

Still, if there’s a high likelihood that your future includes driving in zero-emission zones, then the Turbo S E-Hybrid is a thrilling way to combine the capability of a crossover, the dynamics of a high-performance sports car, and the emissions-free driving of an electric vehicle.