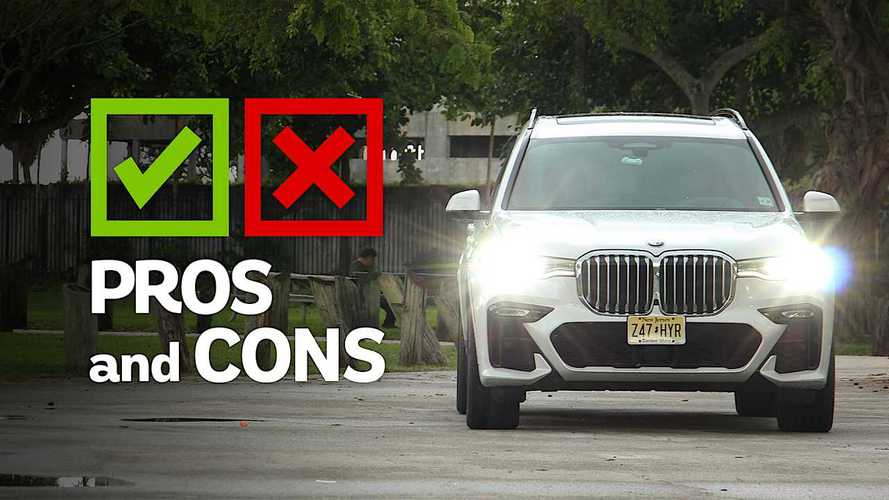 An impressive SUV on almost all fronts. Almost.

The BMW X7 is the brand’s first real venture into the crowded three-row crossover segment (not counting the X5 with a shoehorned-in third row a few years back), and what a venture it is. The large crossover arrives with bold styling, a posh cabin, and a gem of an optional engine in the form of a twin-turbocharged V8.

It is the long-overdue larger sibling to BMW’s popular X5. But what the three-row X7 offers in style, performance, and passenger room, it lacks in other key areas like cargo. BMW’s largest crossover also gets extremely pricey with options.

The BMW X7 is polarizing, especially in a class that includes pretty tame-looking crossovers like the Audi Q7 and Mercedes-Benz GLS. But the over-the-top elements work in the X7's favor. The M Sport exterior upgrades (part of the $3,550 M Sport package) of our xDrive50i tester, the oversized dual-kidney grille, large LED headlights, blacked-out lower vent, and excessively styled side vents give the SUV an imposing, sporty look. The X7’s more chrome-heavy base model is less appealing. The bigger 22-inch M Sport wheels look better, too, and though the rear is mundane compared to some of the features found up front, the X7's interesting-enough rear angles help offset the backend’s otherwise generic cues.

BMW's twin-turbocharged 4.4-liter V8 continues to impress. The company uses this V8 in multiple products, but it proves most impressive here, able to move the large crossover with ease. With 456 horsepower and 479 pound-feet, the X7 xDrive50i has tons of torque off the line. Even at high speeds, the engine always has power when you need it. This mammoth SUV feels genuinely quick.

But the X7's engine is just as good in the city as it as at high speeds. The refined and competent V8 never feels overbearing, and it yields a decent 17 miles per gallon combined.  That’s better than the Mercedes-Benz GLS (14/19/18) with the V8. Paired to a quick-shifting eight-speed automatic transmission, this powertrain setup is supremely suited to the X7.

This is true of most modern BMWs (as we learned driving the most-recent 3 Series), but the X7’s active safety suite is virtually flawless. Lane-keep assist helps the SUV stay centered on the highway, radar cruise control maintains a safe distance to the car in front of it and inputs smooth braking, and autonomous lane changes happen with just a flick of the turn signal.

Even better, all of this equipment comes standard on xDrive50i. Blind-spot monitoring, lane departure warning, rear collision warning, and forward-collision warning with pedestrian detection are no-cost extras on both the 40i and 50i models, while the aforementioned active suite is standard on the 50i (but a $1,700 option on the 40i model).

The BMW X7 comes standard with lots of great tech. The 12.3-inch central touchscreen with the latest version of iDrive features Apple CarPlay and Android Auto. The equally massive 12.3-inch digital instrument cluster displays multiple options at one time and is easy to use thanks to steering wheel-mounted controls. And nearly all of it comes standard on the 50i trim.

The problem is, we found much of it unreliable. There were issues connecting to wireless CarPlay (not uncommon, as we've learned), the navigation system either shut off at certain points during the week or told us the car was in the middle of the ocean. And random sensors and warnings would go off, though we found no issue with the car itself. This could be an isolated incident, but our recent 3 Series tester had some of the same problems, which could indicate a trend.