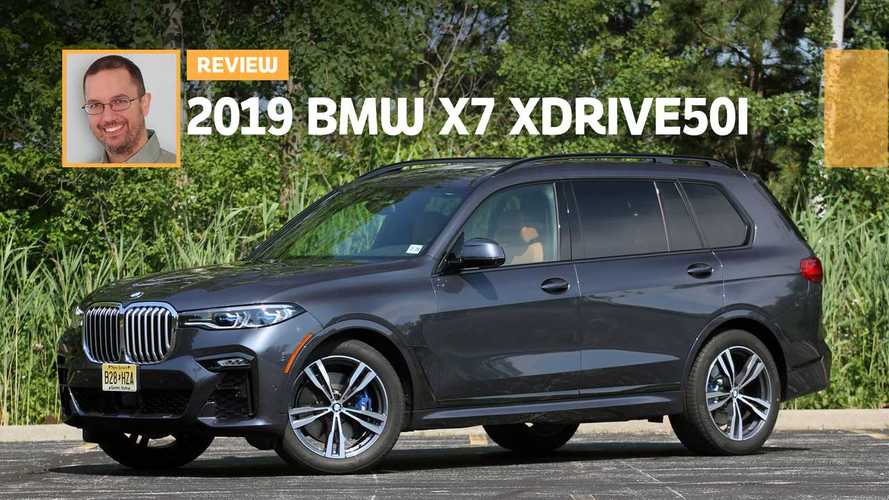 It took BMW a while to get here, but the X7 is definitely worth the wait.

BMW finally added a large three-row crossover SUV to its lineup: the X7. While shoppers with large families were out buying three-row SUVs from its competitors, BMW was busy trying to convince us that "Sport Activity Coupe" is a real thing, and launching ever smaller crossovers until it ran out of whole numbers to use in their names (what’s below an X1, an X0.5?).

With all that out of its system, BMW has finally turned its attention towards families looking for a luxurious, spacious, and capable vehicle. What’s unique about the X7, though, is that BMW didn’t let this SUV’s gargantuan proportions dictate how it drives. The X7 may just be the best-driving three-row SUV you can buy. Unfortunately, it’s also one of the most expensive.

The X7 has gotten grief for its oversized interpretation of BMW’s iconic kidney grille. Yes, it’s every bit as large in person as it looks in pictures. That said, it’s not offensively big, at least not enough to count against the X7’s overall styling. In fact, the grille is the most interesting element of an otherwise conservative, if not boring, design.

For instance, everything from the A-pillar back on the X7 is generic. In fact, if you cover the front end with your hand, you might not be able to distinguish the rest of the X7 from the new Cadillac XT6. Unfortunately, that’s not a compliment.

While the overall exterior design might be lacking inspiration, at least the details are interesting and impeccably executed. We particularly like BMW designers’ use of satin brightwork on the exterior, especially immediately after the front wheels and across the front fascia where it half surrounds the air intakes.

Inside is a different story. BMW has upped its interior game, beginning with the X7 and carrying over to the updated 7 Series. The cabin’s styling is high-end, high-quality, high-tech, and highly functional. The dashboard features a largely logical layout that incorporates premium materials like real wood and metal. Our favorite touch, though, are the optional $650 glass controls that add Swarovski crystal shifter, iDrive controller, start/stop button, and volume knob. Volvo did it first with optional crystal gear shifter, but the effect is no less pleasing in this BMW.

Ride comfort in the X7 is good, though buyers should know that BMW doesn’t make pillowy soft suspensions. The X7 does a decent job of smoothing out bumps and masking noise and vibration while doing so, but BMW has kept some firmness in the suspension to preserve  decent handling characteristics. The balance, though, is excellent, where neither comfort nor cornering ability seems prioritized too much at the expense of the other.

In regards to space, the X7 is the largest BMW ever made, but it’s not the largest three-row luxury crossover SUV you can buy. Dimensions are generous in all directions for passengers in the first and second row, but both cargo space and room for third-row passengers falls behind some of the competition.

Front-seat passengers in the X7 xDrive50i get standard 20-way power seats. Second-row passengers, ride on a standard three-across bench, although our tester carries a pair of captain’s chairs at a $600 premium. The standalone seats don’t get as many seat adjustments as the front chairs, but do get removable pillow headrests that make napping away the hours of a road trip a pleasure rather than a pain.

As for the third row, ingress and egress are easy, and once seated, headroom and legroom are reasonable for, too. While a generously accommodating third-row isn’t the X7’s claim to fame, it’s not terrible back there and at least the windows are large enough to alleviate some claustrophobia.

In terms of cargo space, the X7’s cargo area is tight at just 11.5 cubic feet with the third row raised, but it swells to 48.6 cu-ft with the third row folded. When the second row is folded, maximum capacity increases to 90.4 cu-ft, which is just a few cubes shy of the current Mercedes-Benz GLS at 93.8 cu-ft, and far ahead of the Audi Q7 at 71.6 cu-ft and Volvo XC90 at 85.7 cu-ft. Though it trails its main competitor, the Mercedes, in this important metric, the difference in cargo space is small enough that you should see both in person, and even test them with items you often haul (strollers, sports equipment, etc.) before choosing. You should also try out in person the X7’s split-folding tailgate before you buy. BMW also offers this feature in the smaller X5, and it’s a love-it-or-hate-it piece of kit.

The X7 is one of the first BMWs to get the brand’s seventh-generation iDrive infotainment system, which features even larger and sharper screens, more impressive graphics, lickety-split response times, and great input options.

Both of the interior’s screens, one atop the center dash for infotainment needs and one behind the wheel for gauges and driving information, are 12.3-inches large and impress with their sharpness and vivid colors. BMW also offers a large head-up display with multiple colors and high-res graphics.

It isn’t the primary mission of a three-row crossover SUV to be fun to drive, but the X7 excels as a driver’s tool As already mentioned, the suspension tuning and optional M Sport suspension deftly balance a comfortable ride with controlled, communicative handling in such a way that neither feels overlooked.

In terms of handling, the X7 feels light on its (awfully large) feet. The steering is quick and the rest of the car changes direction willingly, making it seem lighter and more tossable than a vehicle weighing 5,617 pounds should. In my notes, I’ve written, "One of, if not the, best-handling three-row SUVs.

Of course, there are electronics aiding the X7 here. In particular, the car’s Comfort and Sport driving modes are excellently defined and make appreciable changes to the X7’s steering, throttle response, transmission shift points, and suspension dampening. What’s remarkable, though, is that you could leave the X7 in either mode all day and be happy. Comfort is a perfect everyday setting, while Sport makes the X7 more fun to drive but not at all impossible to live with.

Our particular test vehicle also had the M Dynamic Handling package, which for $4,750 adds bigger M sport brakes, an M Sport differential, and active steering (that is, four-wheel steering). The latter feature isn’t noticeable in operation, but we suspect it has a lot to do with how nimble this massive vehicle feels around corners.

BMW needed a robust powerplant for the X7 and found one in the company’s twin-turbocharged 4.4-liter V8. The engine produces 445 horsepower and 479 pound-feet of torque, which gets routed to all four wheels through a quick-shifting eight-speed transmission. Again, BMW has managed to imbue its V8 with a dual nature where it operates with silent grace in most situations and releases a reservoir of thrust when summoned. It’s got two turbos, but they’re virtually invisible with zero lag.

While the V8 exacts an $18,700 premium over the 335-hp inline six-cylinder in the xDrive40i, this is one of the few times we’d recommend splurging for the bigger motor because it’s that good (and the I6 feels a little underpowered).

Though BMW has a reputation for nickel-and-diming buyers on optional features, which often includes advanced safety systems, that’s not the case with the X7 xDrive50i. In fact, of the nearly $20,000 of options our tester came with, not a single extra dollar was spent on safety equipment.

Every safety system that BMW offers comes standard on the X7 xDrive50i. This includes simpler technology such as blind-spot detection and rear-cross traffic alert, as well as more advanced systems such as automatic emergency braking at high and low speeds and lane keep assist. Exterior lighting is also top of the line on the X7, with adaptive (swiveling) LED headlights and LED fog lights up front, and progressive LED brake lights out back.

Lastly, visibility outward is exceptional in the X7. There’s lots of glass to see through in all directions, including over your shoulder and in the rear-view mirror. Also, the X7 comes with an excellent rear-view camera that includes both a 360-degree and 3D view, both which make parking this giant particularly easy.

As you might imagine, a twin-turbocharged 4.4-liter V8 doesn’t achieve stellar fuel economy. The Environmental Protection Agency (EPA) officially rates the X7 xDrive50i at 15 miles per gallon in the city, 21 on the highway, and 17 combined. That’s similar to the 16 combined mpg the most powerful Mercedes-Benz GLS can manage. It’s also far below the 21 combined mpg of the Audi Q7, let alone the 58 mpg combined of the Volvo XC90 T8 eAWD Plug-In Hybrid.

The X7 also requires Premium fuel, but that’s common for the segment. What’s not common is its relatively small fuel tank, which allows for only 372 miles of range. The aforementioned XC90 can travel nearly 500 miles per tank and charge.

The X7 has the distinction of being the most expensive three-row luxury SUV you can buy, at least when going by starting price. A base model X7 xDrive40i with a twin-turbo 3.0-liter inline six-cylinder engine starts at $73,900, while our V8-powered xDrive50i tester has an entry price of – gulp – $92,600. That’s a jump of $18,700 between the two submodels that nets you a bigger engine with 121 more horsepower (456 hp compared to 335). The xDrive50i also comes with more standard equipment than its lower-priced sibling, but most of these features are still optional on the xDrive40i.

For comparison’s sake, consider the X7’s most obvious opponent, the Mercedes-Benz GLS. The base GLS 450 has a starting price lower than that of the X7 xDrive40i at $70,150, and it comes with a similar, though more powerful, base engine – a twin-turbo 3.0-liter V6 making 362 hp. Upgrading to the more powerful GLS 550 produces a similarly large price hike, in this case up to $95,750, though it’s accompanied by a twin-turbo V8 that’s slightly less powerful than the BMW’s (449 hp compared to 456). So, on paper, Mercedes’ base model looks better, but the X7’s a little sweeter with the V8 – if you can afford it.

The actual price of the X7 xDrive50i we tested was $112,245, all thanks to a number of option packages that were each over $1,000 apiece. The most expensive was the Dynamic Handling Package at $4,750, and the rest included the M Sport package for $3,550, the Executive package for $2,100, the Premium package for $1,550, and the Cold Weather package for $1,200. BMW could slip another $1,000 option package in there and you probably wouldn’t notice, and we still haven’t mentioned the individual options that added another $5,500 in cost, the most expensive being the optional $3,400 Bowers and Wilkins sound system. Suffice it to say, when you’re buying BMW, you’re never paying the advertised price.