The 2020 Audi E-Tron posits a simple question: what if you want an EV that isn't a Tesla? Despite what members of the Cult of Elon might say, there are reasons for this. Maybe you don't like the company's styling, or its founder, or you just want to be different. Perhaps build quality and an established dealer network are high priorities. 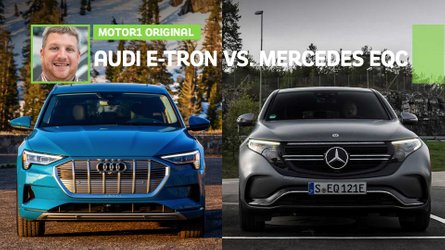 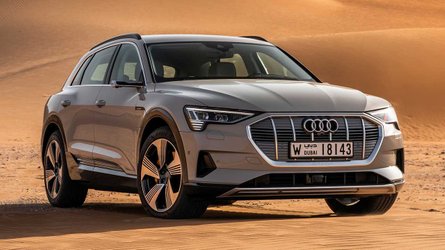 2019 Audi E-Tron First Drive: A Move For The Mainstream

In that regard, the Audi E-Tron ticks the right boxes. While Audi falls short of Tesla-beating performance or range – two inarguably important metrics – the disparity between it and a Model X isn't so great that there's a clear-cut case against the Audi. Purchasing a high-dollar electric crossover is always going to require a degree of rationalizing. The E-Tron just takes a bit more rationalizing than the equivalent Tesla.

Credit to Audi for building an EV without feeling the need to figuratively shout it from the rooftop with some extreme piece of design. By and large, the E-Tron is just a better looking Q8. We prefer its neater grille, which features silver highlights instead of the Q8's angry, black design. The headlights are tidier too, with less visual mass on the bottom section.

In back, a vehicle-spanning LED strip ties together the slim taillights. Again, this is a cleaner, more restrained look compared to the Q8, which adds a thick black bar underneath its lighting element. By virtue of its emphasis on aerodynamics, the E-Tron's bumper, with its silver-painted accents, is more restrained than the Q8, which features prominent exhaust outlets for its gas-powered engine.

The E-Tron's cabin adopts the glass-cockpit look featured in the Q8, as well as the A6, A7, and A8. There are three displays – a 12.3-inch digital instrument cluster, a 10.1-inch touchscreen at the top of the center stack, and an 8.8-inch touchscreen below the main display but ahead of the gear selector – and each features impressively pretty graphics. Beyond that, the interior's design is clean and minimalistic with handsome matte wood and subtle silver accents. Our favorite interior touch, though, is the steering wheel, which has a nifty four-spoke design that mimics the yoke of an airplane. It's very cool.

Like most EVs, the E-Tron offers excellent noise, vibration, and harshness control, owing to the silent propulsion system. Without the engine noise (aside from the simulated audio note of the pedestrian warning system), the E-Tron is impressively quiet in urban conditions, shrugging off impacts from road imperfections and the roar of its low-rolling-resistance tires. At higher speeds, the sound of the wind rarely interrupts the serene cabin experience.

In addition to that plus, the E-Tron does all the comfort-focused things other Audis do so well. The front seats are supportive and comfortable, whether dicing down a canyon road or cruising down the freeway. There's enugh range of adjustability in the seat, although our tester's optional massage function hardly seems like a conducive use of the E-Tron's electrons. Forward visibility is solid, and the blind spots are minimal. The second-row bench is roomy for two adults, with plenty of leg and shoulder room. As with most vehicles this size, we'd advise against adding a third full-grown human to the mix, although it's doable over short distances.

There's ample cargo space – 28.5 cubic feet with the seats up and 57 cubes with the second row folded. That means only a minor sacrifice from the Q8, which has 2.0 and 3.7 more cubes, respectively. The cargo floor is pretty high, though, so loading and unloading isn't always that easy. A standard air suspension helps matters. In the cabin, meanwhile, there's plenty of space for stuff, with sizable door pockets and a giant cubby in the center console. We like this touch, but wish Audi offered a way to cover it up, to better hide valuables.

No, the Audi E-Tron is not as quick as a Tesla Model X. It's not as quick as a Jaguar I-Pace or Mercedes-Benz EQC, either. Set to its most aggressive drive mode, Dynamic, the E-Tron can scoot to 60 in a relaxed 5.5 seconds. That is unquestionably slow in a world where the most affordable Tesla Model X can hit 60 in 4.4 seconds.

But particularly for a customer that's only driven gas-powered cars, the immediacy of the E-Tron's 414 pound-feet (up to 490 lb-ft in Boost mode, which comes in automatically when Dynamic mode is active) is eye-opening, especially when deploying the torque in bursts rather than in sustained acceleration. While performance fades with the pedal held down, a sudden blast – like when trying to shoot a gap in traffic – reveals the powertrain to be suitably punchy. Still, anyone who has experienced the extreme performance of a Tesla product will find this EV lacking. Hopefully, Audi's RS line will get a crack at the all-electric game and introduce a variant with more aggressive acceleration.

Overall straight-line performance might be lacking, but there's a real likability here, especially around town. There are no histrionics in how the E-Tron accelerates. Its single-speed automatic is unobtrusive and eager to engage, even from a standstill. The only real issue is that it's so much slower than its competitors.

A big part of that is down to weight, though. At around 5,500 pounds (Audi still hasn't published weight figures), the E-Tron is heavier than the Mercedes EQC and the Model X Long Range despite both having larger, heavier batteries. That mass has a negative impact on handling, although as expected, handling in the real-world conditions of metropolitan Detroit is better than on the twisting Californian roads we first experienced it. Our rating reflects that point, calling the E-Tron neither above or below average on a handling front.

The brakes operate like a lot of EVs, in that in many conditions, the physical brakes don't come into play unless you need to come to a complete stop. Instead, the electric motors slow the car and recuperates energy in the process, a typically smooth, predictable practice. But when we really dug into the brake pedal and triggered the physical calipers/rotors, there was a noticeable shudder as the car realized it needed more stopping power than the motor could provide. This disconcerting sensation only cropped up when we were actively testing the braking.

Audi remains one of the premiere brands for in-car technology and the E-Tron is a reminder of that fact. The two-screen infotainment setup is excellent, offering attractive graphics and impressive responsiveness. The menus are a little dense, but the learning curve isn't egregiously steep. There's also an impressive level of reconfigurability, so owners can optimize the layout of the upper screen based on their needs. The E-Tron ticks the box with advanced equipment, too, offering wireless charging, a gorgeous digital instrument cluster, and a wireless hotspot. There's even a nifty toll collection system, so you won't need to attach a stupid box to your windshield for driving on toll roads.

All of those things come standard. On top of the infotainment and advanced tech, the E-Tron's standard equipment list ticks all the right boxes. Heated and ventilated front seats, LED headlights, an air suspension, a Bang and Olufsen audio system, a surround-view camera system, and four-zone climate control are all standard on the base E-Tron. That's a solid suite of gear.

The other main options are a $650 Towing package that allows the E-Tron to tow up to 4,000 pounds and a $900 Cold Weather package, which adds heated outboard rear seats, heated windshield washer jets, and an enhanced in-cabin heater and preconditioner.

The E-Tron offers the entirety of Audi's active safety suite at no additional cost on the base model. It's standard on our Prestige tester. Standouts include full-speed adaptive cruise control and automatic emergency braking, blind-spot monitoring with a vehicle exit sensor, traffic sign recognition, and lane departure warning with lane centering. And these systems work extremely well.

On the freeway, the active safety is proactive without feeling intrusive. You can drive, and just let the systems work in the background, gently nudging you back towards the center of a lane, braking the car gently, and applying throttle without leaning too hard on the battery. This is a very likable, usable suite of technology. Along with the LED headlights, the E-Tron is an impressively safe vehicle.

With an EPA-estimated fuel economy rating of 74 miles per gallon equivalent, the E-Tron might be an EV, but it’s not especially efficient. A Jaguar I-Pace is mildly more efficient, at 76 mpge, while the top-rung Tesla Model X with 22-inch wheels returns 79 mpge – the most efficient Model X will do 101 mpge combined.

The E-Tron’s range is also disappointing relative to the Model X, at 204 miles per charge. It claws back some praise with its impressive 150-kilowatt charge rate, though. During testing, an Electrify America DC fast charger took our E-Tron from 35 percent of charge to just over 80 percent in 17 minutes.

In terms of energy consumption, our tester returned a computer indicated 2.2 miles per kilowatt-hour. That's pretty much spot on with its EPA estimated efficiency, which is to say it's disappointing in 2019. Frankly, the E-Tron's 95-kilowatt-hour lithium-ion battery pack is ample, but the vehicle it’s attached to is just too “thirsty” and too heavy.

The most obvious is the Tesla Model X, which, at $84,990 for the Long Range model is a smidge more expensive while offering significantly more range. A max of 325 miles is hard to ignore as is a run to 60 that's done over a full second quicker than the E-Tron. But where the Audi is essentially loaded at $85,000, the Model X can climb higher, even if those options are things the E-Tron can't match, like a six- or seven-seat layout. Tesla offers its impressive Autopilot system standard, although there’s a premium for its most advanced active safety gear – the $6,000 Full-Self Driving Capability (it's not full-self driving, kids, that doesn't exist) is definitely more advanced than what Audi is offering, though.

The other rival, at least until the Mercedes-Benz EQC400 arrives, is the Jaguar I-Pace. An excellent driver's EV, it has a lower starting price at $69,500. It's also faster, taking 4.5 seconds to hit 60, and offers more range with 234 miles to a charge. The Jag's customizability is also welcome, with three separate trim levels, a range of packages, and a broad palette of wheel and color options. That said, while the I-Pace is more affordable (even the range-topping model undercuts the loaded E-Tron by around $4,000), its active safety suite feels neither as expansive nor as competent in daily use. Its inability to charge at a rate above 100 kilowatts is also a significant shortcoming that'd have us considering the Audi first.