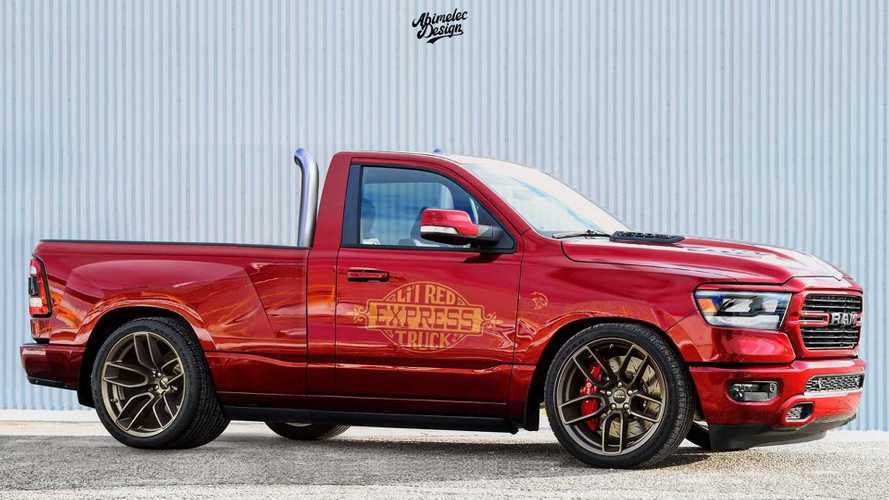 Contrary to popular opinion, there were a few automotive bright spots to emerge from Detroit in the late 1970s. One of them was the iconic Li’l Red Express Truck from Dodge, which was a dressed-up D-Series full-size pickup offered in 1978 and 1979. To this day it remains one of the coolest street trucks ever offered by an automaker from the factory, and Abimelec Design on Facebook reckons it’s time for a Li’l Red reboot.

This isn't an idea simply coming out of the blue. Fiat Chrysler Automobiles launched an at-home design challenge, with FCA’s Head of Design Ralph Gilles and Ram Truck Head of Exterior Design Mark Trostle serving as judges. The challenge aims to raise awareness for the automaker’s annual Drive for Design contest for high-schoolers, but there’s also the whimsical aspect of engaging automotive-minded individuals around the world in a 24-hour contest of creativity. The contest is just about up as of this article posting, and while we haven’t seen other entries, we have to believe this one is a serious contender.

The current Ram 1500 design lends itself well to a dedicated street application. Admittedly, the nose on this rendering looks quite large paired to a single-cab, short-box design. Then again, looking at the original Li’l Red, it’s nose was quite bulbous too. The chrome exhaust stacks on the original truck were mounted outside the bed, but we like the more subtle in-bed approach taken here. The lowered stance and flare side bed bring it all home – the only thing missing is wood trim but honestly, we’re not sure that would work on a modern reboot of this classic.

The original truck wasn’t just an appearance package, and neither is this version. A loophole in 1978 U.S. emission regulations allowed Li'l Red to run without catalytic converters, and as a result, its 5.9-liter V8 developed 225 horsepower (168 kilowatts) at a time when many V8s struggled to make half that power. It was the quickest U.S. production vehicle in 1978, and while a modern Li’l Red Express Truck would require insane power to claim that title, it could certainly rank among the quickest with a 717-hp (535 kW) Hellcat V8 under the hood. Naturally, this truck is rendered with a Hellkitty on the fender, signifying the demonic power within.

FCA Is Hosting A Sketch Battle For Outrageous Ram Designs

It seems like a slam-dunk for Ram, right? Sadly there are two major problems, with the first being that Ram actually doesn’t offer a single-cab truck anymore. Even a base-model Tradesman only comes in a quad-cab layout. Secondly, there hasn’t been a flare side bed option from Ram in ages, and there’s no indication that such an option will ever be offered again.

Still, could a quad-cab Ram with two-wheel drive and a straight bed be worthy of a Li’l Red Express makeover?