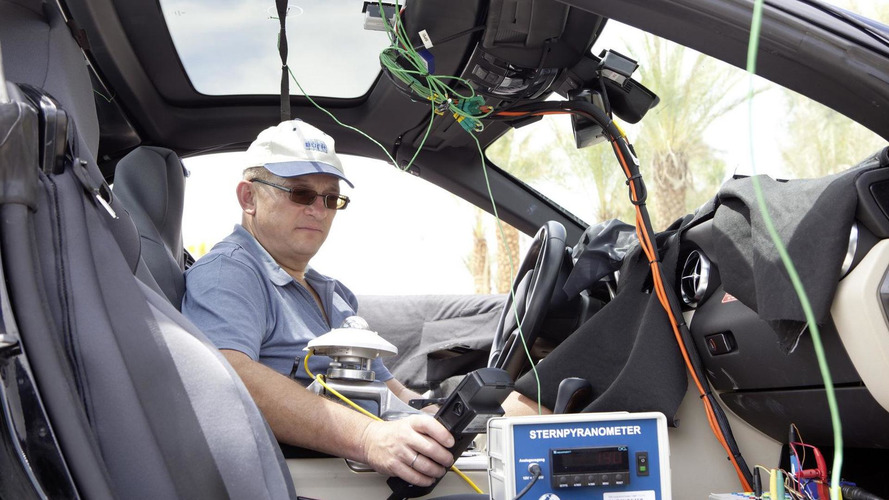 Mercedes has revealed new details about the Magic Sky Control roof on the 2012 SLK. Details inside

Mercedes has revealed new details about the Magic Sky Control roof on the 2012 SLK.

Designed to reduce cabin temperatures, the electrochromic glass roof can be darkened within a matter of seconds via a switch located on the overhead console. As the company has previously explained, "The operating principle is based on the physics of a plate condenser: if the glass structure is subjected to an electrical voltage, particles in the structure position themselves so that light is able to pass through the glass. If the voltage remains switched off, however, the particles position themselves randomly. This partially blocks the light, and the glass remains dark."

To prove the design has merit, engineers conducted a number of tests in Death Valley. While most of the details are technological gibberish, the roof blocks UV and infrared light which helps to keep cabin components (shifter, armrest, etc) up to 10 degrees Celsius (50 degrees Fahrenheit) cooler than a standard sunroof.

Besides talking about MSC, Mercedes released several new pictures which give us our first official glimpse at the interior. Despite being partially covered with camouflage, the cabin features an SLS-inspired dashboard, a three-spoke steering wheel, and a new instrument cluster.

The car will be unveiled next year, likely in Detroit or Geneva, so stay tuned for details.