For the first time in a long time, Mitsubishi offers a vehicle near the top of its class.

Compact crossovers are a cutthroat business, so it takes something special for a small brand to stand out in this crowded space. In the case of the 2022 Mitsubishi Outlander – a vehicle that, let's be honest, probably wasn't on your shopping list before – one key feature gives it a leg up on most of the alternatives: a standard third row of seats.

That may not sound like a huge deal in the larger scope, but remember, buyers love three-row crossovers. And those extra seats aren't the only thing that the newest Mitsubishi brings to the table. The 2022 Outlander is composed, comfortable, tech-friendly, and available with some of the best active safety equipment currently out there. Plus the Mitsu starts at a very reasonable $25,795, which makes it one of the most affordable three-row crossovers on sale today.

For the sake of complete transparency, though, it should be noted that the new Outlander is basically just a Nissan Rogue with a new face. The two brands partnered for this vehicle platform as part of their global alliance, and they're not trying to hide it – for good reason. The Nissan Rogue is a great vehicle, and if you want that same sublime crossover experience with more seats, then there's no reason not to buy a 2022 Outlander.

Mitsubishi uses terms like “authentic” and “majestic” to describe the styling of its new Outlander. Those probably aren’t the words I’d use. What I will say about this exterior design is that it’s definitely not anonymous. The brand’s Dynamic Shield grille is visible from a mile away, sporting slim LED running lights up high on the bumper, headlights lower down on the fascia, a mostly blacked-out grille, and some chintzy faux chrome surrounding it all. The bold “OUTLANDER” wordmark across the hood line is a nice touch.

But that’s really where the love-it-or-hate-it styling ends, since the rest of the Outlander looks clean and modern. The aggressive body sculpting and sporty 20-inch wheels on our tester create a sharp profile. The tapered roofline with a floating-roof element – because of course – extends into a svelte rear end, affording the Outlander a boxy look. The taillights are slim and inoffensive, too, with some nice black detailing, and there’s no chrome in the rear to speak of, unless you count the satin-finished diffuser (which I do not). 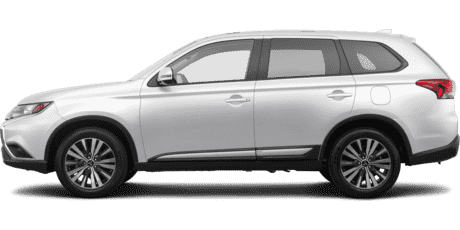 save over $3,400 on average off MSRP* on a new Mitsubishi Outlander

Mitsubishi tries to pitch the Outlander’s styling as Montero-adjacent, and if you squint hard enough, there are some inklings of the iconic off-roader in this crossover’s DNA. But mostly, the Outlander does more to conjure the car on which it’s based: the Nissan Rogue. Even with the obvious Mitsubishi touches, the exterior shape looks familiar – albeit extended by about 2.5 inches and widened by one inch. And that familiarity carries over more obviously in the cabin.

The Mitsubishi badge on the steering wheel is the only indication that this vehicle is anything other than a Nissan Rogue. But again, that’s a good thing. Spending time in the 2022 Eclipse Cross later in the same afternoon, it’s obvious the new Outlander is leaps and bounds better than anything else the brand currently offers in terms of interior fit, finish, and overall quality. The inside of the Mitsubishi Outlander is really good (thanks, Nissan!).

The first things you’ll notice when opening the door are the seats – including the ones way in the back. Mitsubishi offers three rows of seats in its new Outlander for no cost, whereas Nissan doesn’t offer that option in the Rogue at all. But even Mitsubishi admits that the rearmost bench is for “occasional use,” and that’s obvious as I try to contort my six-foot frame back there – I wouldn’t be comfortable for more than five minutes back there. But it’s a nice standard feature to have for surprise carpools.

The Mitsubishi badge on the steering wheel is the only indication that this vehicle is anything other than a Nissan Rogue. But again, that’s a good thing.

The front buckets wear semi-aniline leather on this loaded SEL Touring model, finished in a slick black with orange stitching. There’s also orange leather that extends onto the center console, dash, and door panels. Typically I wouldn’t wax poetic about a steering wheel (especially in a crossover), but the Outlander has a very nice leather-wrapped wheel that’s chunky and fits exceptionally in the hand. That is one of the few changes Mitsubishi made over the Rogue, which has a much thinner steering wheel, but it’s a welcome move.

The only minor gripe I have is with the shifter. It’s the same setup here in the Outlander as it is in the Rogue, and neither feels particularly well executed. The styling of the shifter makes it easy to accidentally bump into neutral, and the housing itself feels flimsy (as it did on the Nissan). But this is a minor problem that the two brands will hopefully take into account for the mid-cycle refresh.

Atop the dash is an optional 9.0-inch touchscreen, which represents a 1.0-inch improvement over last year’s Outlander. Again, this is the exact same screen you get in the Nissan Rogue, and it’s not any better or worse here. Touch functionality is still good-not-great, the user interface is generally easy to navigate, and the home screen layout is clean, with a few tactile quick-access buttons just below it for things like audio and navigation. Wired Apple CarPlay and Android Auto come standard across the range, while wireless CarPlay is available on this SEL model as an option. There is no wireless Android Auto yet, unfortunately.

In front of the driver is a crisp 12.3-inch digital cluster (standard on SE Launch Edition and above). This is another familiar carryover from the Rogue and remains as configurable as ever, with the ability to display readouts for navigation, media, driver assistance, and much more. Even the nifty graphics for the drive mode selector remain.

The 2022 Outlander also offers a 10.8-inch head-up display. The crystal clear HUD projects onto the windshield – unlike the Eclipse Cross, which projects onto a foldable piece of glass – and displays readouts for many of the same functions you get on the digital cluster: navigation, media, driver assistance features, etc.

Speaking of driver assistance, the Mitsubishi Outlander does offer an advanced cruise control system with lane-centering dubbed “Mi-Pilot,” which comes standard on the SE trim and the SEL model tested here. To no surprise, this is just Nissan’s ProPilot Assist with a different name, but again, this isn’t a bad thing. Mi-Pilot accelerates and brakes smoothly, keeps the Outlander centered in the lane, and can even navigate on its own around sharper turns in the road. It’s one of the better active safety systems out there currently.

Powering the Outlander is a 2.5-liter four-cylinder engine with 181 horsepower and 181 pound-feet, paired to a standard continuously variable transmission with the choice of front- or all-wheel drive. Our tester sports the latter drive type plus six available drive modes: Eco, Normal, Tarmac, Gravel, Snow, and Mud mode, which is an AWD exclusive and reserved for when the going gets tough. The front-wheel-drive model only comes with five modes.

Nonetheless, I kept my Outlander exclusively on the pavement (not counting the gravel pull-off pictured here), and over 200 miles it drove... adequately. There’s nothing inspiring about the way this vehicle moves, but it’s certainly not offensive, either. Power is fine, the CVT is acceptable and quiet for the most part, and the steering is nicely weighted, helped by that extra-thick steering wheel I like so much.

There’s nothing inspiring about the way this vehicle moves, but it’s certainly not offensive, either.

The Outlander does display some huffing and puffing at highway speeds, particularly when trying to overtake – and only there does the CVT get a bit whiny. The extra length, width, and curb weight compared to the Rogue (this version weighs 3,808 pounds as-tested) make the Outlander feel a bit heavier on the road, too, and that means fuel economy also takes a hit comparatively. This version of the Outlander achieves just 24 miles per gallon city, 30 highway, 26 combined compared to the nearest all-wheel-drive Rogue’s 25 city, 32 highway, and 28 combined.

Our loaded SEL Touring model with all-wheel drive costs $36,445 as-tested, but at $25,795 to start for a base front-wheel-drive ES model, the 2022 Mitsubishi Outlander is a relative bargain. The Outlander is the most affordable three-row compact crossover, with the VW Tiguan ($26,440) being the lone alternative with the extra row – and only this year has VW adopted those extra seats as standard. Beyond that, the next-cheapest three-row costs north of $30,000; meanwhile, the two-row Rogue starts at $25,750 for 2022.

Outside of styling or wanting something a bit sportier, I can’t find many reasons to not recommend the 2022 Mitsubishi Outlander. The Outlander, like the Rogue, is a great compact crossover that ticks nearly every box. This vehicle offers safety and technology in spades, plus standard three-row seating, which you won’t find elsewhere at this price point.