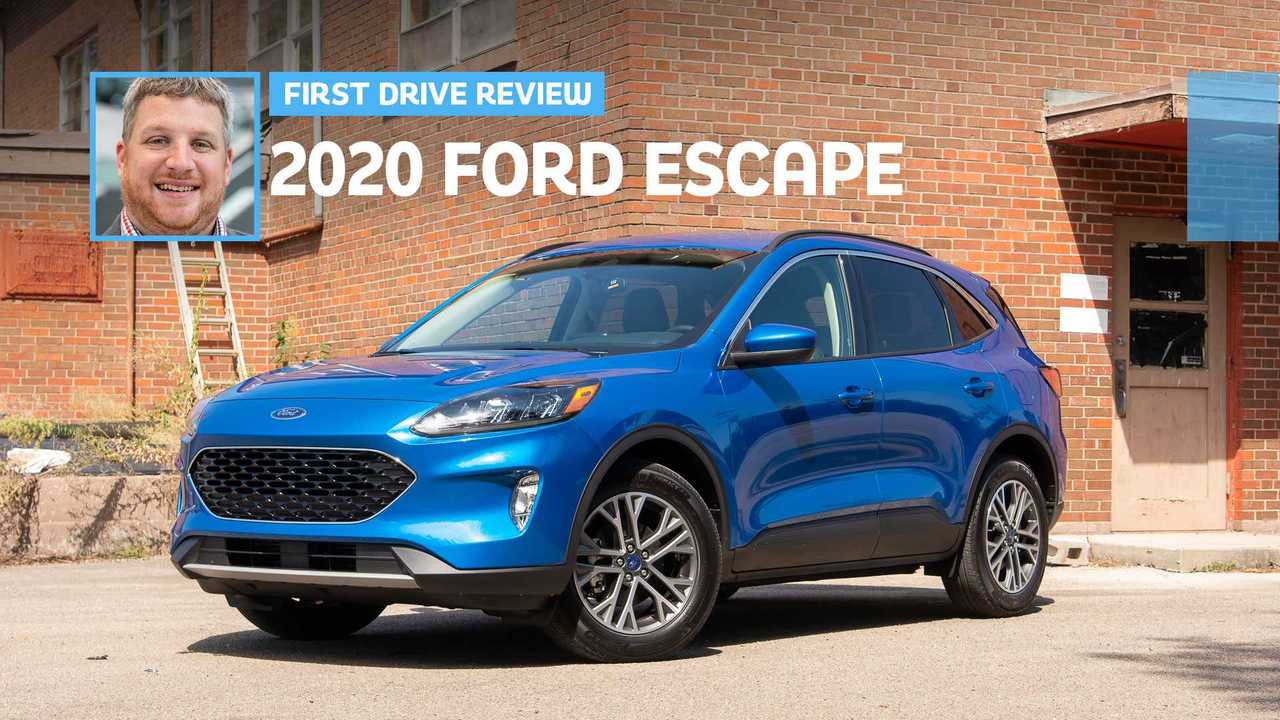 Ford’s canceled cars live on in its crossovers.

Ford is killing its line of cars. The new Focus isn't coming to the U.S., and the Taurus recently disappeared from the automaker's website. The same ignominious fate is coming for the Fusion and Fiesta.

Check Out The Stylish New 2020 Ford Escape From New York

This has, rightly, led to concern from the media, analysts, and shareholders. The 2020 Ford Escape, though, should allay some of those fears. The new Escape is a competent compact crossover, possessing the utility, comfort, and technology consumers crave. It also looks and feels more like a car in its styling and character than any of the Blue Oval's previous crossovers. In a product strategy that seems all or nothing, the Escape is a wise compromise between the cars of the past and the crossovers of the future.

Crossing Over The Car

The most outwardly obvious sign of the car's inspiration is the Escape's new grille, which looks like something designers plucked straight off the last U.S.-market Focus. The headlights that flank the blacked-out, hexagonal grille also look Focus-inspired, although the higher positioning and flat, snout-like nose remind us of the Porsche Macan, which is high praise indeed. Ford has toned down the Porsche-ness of the new Escape since it treated us to an off-the-record preview in March 2018, but touches of the Teutonic certainly remain.

The clean, soft lines carry on through the profile, where a swooping roof rail is also reminiscent of Ford's late car lineup. Still, this is a somewhat slab-sided design. In back, though, the Escape gets bold with fashionable horizontal tail lights and prominent “ESCAPE” badging, like what Ford did to the not-for-North America Focus. The design is attractive from most angles, but it's surprising just how much the Escape seems to bridge the gap between the Focus we won't see in the U.S. and the more traditional role of a compact crossover.

As handsome as the exterior is, the Escape's cabin is a letdown in a market where alternatives like the Mazda CX-5 set such a high bar. Even on the range-topping Titanium, black plastic dominates with substandard leather on the seats and wrapped around the steering wheel. The door panels get small slivers of trim but instead of sprinkling in leather – be it real or leatherette – there's a textured finish that looks, for all intents and purposes, like someone attacked the plastic with a pocketknife.

The layout of this cabin, though, is an improvement over yesteryear's model, which Ford said had a cabin that was too cockpit-like for consumers. Designers simplified the center console between the seats with just a smattering of buttons and a love-it-or-hate-it rotary shifter. Those controls – for the electronic parking brake, brake hold, auto stop-start, park distance control, drive modes, and automatic park assist – get their own big buttons that should make eyes-off interaction easy. The climate controls on the center stack are similarly clean and intuitive. An 8.0-inch tablet-style display sits atop the dash, just above a bank of analog controls for common functions like volume adjustment and tuning.

Ford is offering standard analog gauges with a small center display or an impressive optional 12.3-inch all-digital cluster that’s also available in the Explorer. Not only does the analog setup display information as effectively as the digital one, but the optional cluster lacks the configurability that makes similar systems from other automakers so easy to recommend. There's also an optional head-up display, but it's the cheaper pop-up glass-screen variety, and feels barely more useful than the digital cluster.

If the cabin's tech and materials are less than exemplary, the amount of space here almost makes up for it. Every seat in the Escape is impressively roomy. In back, a second-row bench offers up to six inches of travel fore and aft and a maximum of 40.7 inches of legroom – a massive three-inch improvement over the 2019 Escape. Even without placing the bench as far back as possible, the “effective” legroom climbs from 37.3 to 38.8 inches. A 1.5-inch increase in legroom is significant, plus there's more hip and shoulder room, too.

In the real world, your six-foot, one-inch author could happily spend several hours in the back of the Escape, sitting comfortably alongside a similarly sized companion. But while the Escape's second row is comfortable for adults, it's not perfect. The floor seems slightly higher in back, so very long-legged individuals still may not find the increase in legroom satisfactory.

The cabin's increased comfort extends to the Escape's handling and solitude. This is, by design, an impressively quiet car for the class. Ford improved the door sealing and fitted laminated acoustic glass, while also isolating the rear subframe. The result is, for the segment, excellent control of wind and road noise, even at highway speeds. A fully independent suspension with MacPherson struts in front and semi-trailing arms in back work alongside high-aspect-ratio tires to deliver a composed, planted ride on both highways and along undulating backroads.

The Escape is available with 17-, 18-, and 19-inch wheels, and all three feature tires with thick sidewalls (225/65-, 60-, and 55-series rubber, respectively). But there was little real distinction in ride comfort on the roads around Louisville, Kentucky, where we tested the Escape. To be fair, Bluegrass Country's tarmac is light on potholes and imperfections, although we doubt this CUV will be that much noisier on the pockmarked roads up north.

Ford offers three powertrains for the 2020 Escape. The bulk are gas-only, with a turbocharged 1.5-liter three-cylinder on base models and a turbocharged 2.0-liter four-cylinder on upmarket models. A hybrid powertrain is also available (look for that review on September 19), and a plug-in hybrid will follow.

The Escape exhibits excellent control of wind and road noise, even at highway speeds.

The 2.0-liter moves the 3,551-pound (with all-wheel drive) Escape easily, with predictable, linear acceleration whether executing passes on the highway or accelerating out of corners on a two-lane road. The throttle is easy to modulate, although the start-stop system is a little sluggish. As for the turbocharged three-cylinder that serves as the Escape's base engine, our brief 15-minute stint revealed that it isn't as likable as it was in the late Fiesta and Focus. That said, those were smaller, lighter vehicles, and instead of an eight-speed automatic, they carried a six-speed manual.

That eight-speed is the order of the day on gas-only Escapes (the hybrid gets an electric continuously variable transmission) and it's suitably quick and refined in its actions. Our only real complaint is the rotary shifter. While moving the car for photos, we repeatedly engaged Park when we meant to scroll to Reverse – Ford would be wise to increase the dial's detents, just to reduce the chance of selecting the wrong gear.

Look at everything we just wrote in that last section. In each case, you could change each mention of “Escape” to “Fusion” or “Focus” and it'd still ring true. The Escape simply feels more like a car than it ever has.

Until you present it with a corner.

Then, as if Ford realized the Escape felt too much like a car and shouted “Quick, give it some crossover-ness”, it completely goes to pieces. The Escape addresses corners with all the poise and grace of an SUV from yesteryear. There's virtually no feedback through the steering, whether on center, through turns, at low speed, or cruising down the highway. Tiny corrections and the inability to judge how quickly to enter a turn are the symptoms of this particular ill.

That last bit was especially problematic on Bourbon Country's twisting backroads, where we approached corners with too much entry speed, only to realize our problem and reach for the hard-to-modulate brake pedal. Pair that with a tendency to roll too freely, and by the end of our drive, we simply lacked confidence in the Escape's handling abilities.

The Escape addresses corners with all the poise and grace of an SUV from yesteryear.

Whether that will matter to the average consumer, who will spend most of their time on straight roads, is hard to say. What isn't hard to say is that the Escape is in the bottom half of the segment in terms of handling.

It's that combination of a crossover's size and space and a car's comfort that should make the Escape a standout with consumers. There's certainly reason to worry about its ponderous handling and numb steering, but the reality is that the Escape's strongest attributes are the ones consumers care about most.