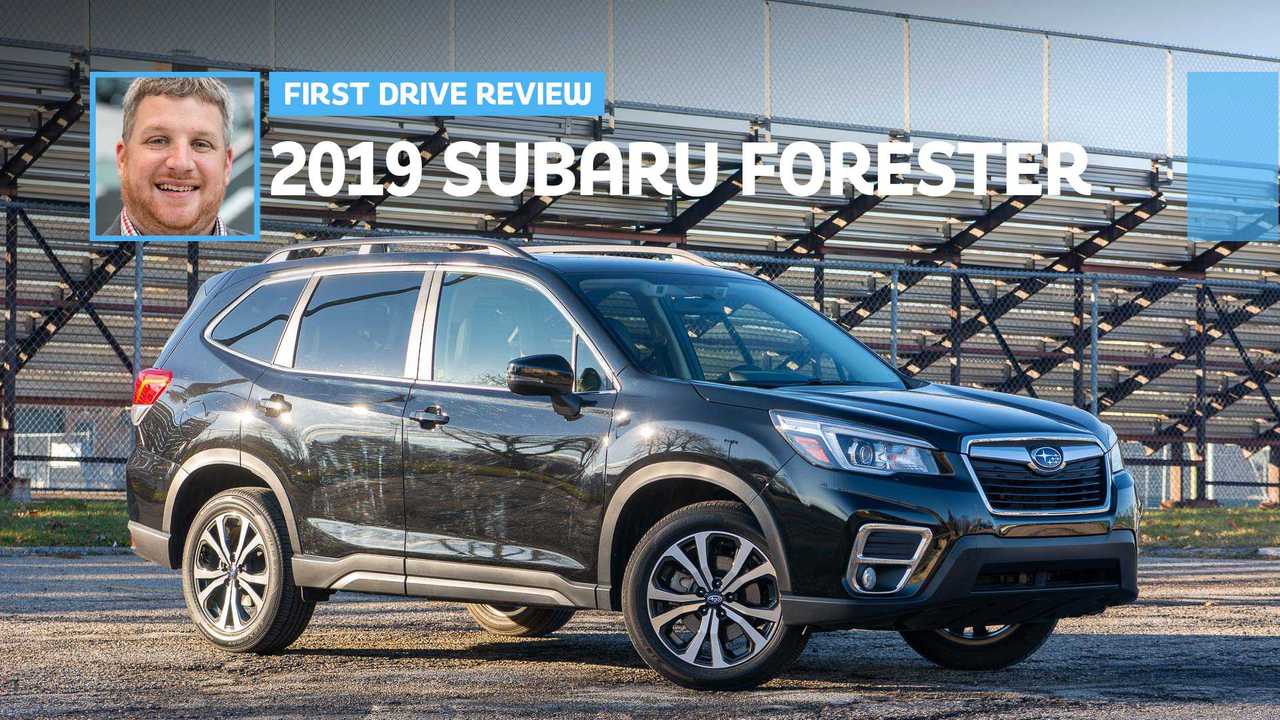 Subaru's conservative redesign of its popular Forester yields yet another winner.

If it ain't broke, don't fix it. That strategy has worked across the auto industry for decades, with brands pinpointing a winning formula and then spending ages perfecting it. The Subaru Forester, like the Porsche 911, the Ford F-150, and the Honda Civic, has it down pat. The only job now is to prune and primp and improve.

And that's exactly what's happened for the 2019 Subaru Forester. The redesigned crossover continues to do a whole bunch of stuff well, while also improving on the biggest issues that faced the last-generation model.

Part of the Forester's winning formula is that it's immediately identifiable as, well, a Forester. Considering that, Subaru's evolutionary design philosophy makes a great deal of sense – there's no confusing this new model with anything else. That doesn't mean the 2019 Forester is especially attractive, though.

This is a utilitarian piece of design, with a classic squared-off, two-box shape that maximizes interior space without ruining the right-sized footprint that's made the Forester such a popular vehicle with young, growing families. Small flairs of design are here, and we like the updated and more expressive headlights and the aggressively creased hood. The oddly shaped taillights are a less successful touch, and we sure wish Subaru's designers added some flair to the car's slab-sided profile, particularly the uninteresting D-pillar. That said, the boxy, upright shape lets in plenty of light, which contributes to the feeling of spaciousness in the Forester’s cabin.

If you want a more stylish Forester than the Limited model shown here, then you might want to check out the the Forester Sport, which gets some nifty reddish-orange accents and lacks the Limited's chrome trim. Just don't go looking for a model with a hood scoop.

The Forester's interior is subject to the same light refreshing as the exterior. That means the evolution of a successful design that offers plenty of space, a logical overall layout, and a pleasant mix of above-average materials. Like the last Forester and the one before that, everything in this cabin is right where you want it to be.

Families and outdoor enthusiasts wouldn't flock to the Forester if it weren't comfortable.

The front seats are impressively comfy and supportive, with excellent sight lines fore, aft, and laterally thanks to the Forester’s expansive windows. The range of adjustment for the driver’s seat is such that even the ficklest pilot can find an adequate seating position. The second-row bench, meanwhile, offers ample legroom for even taller passengers. At a little over six feet tall, your author easily slid in through the wide-opening rear doors with room to spare between his knees and the front seatback.

According to Subaru, the second-row offers 39.4 inches of legroom, which is down only slightly from the 40 inches a Mercedes-Maybach S-Class offers. The seatbacks in the second row also recline on a 60/40 split, while heated outboard chairs are standard on the range-topping Touring trim. In other words, the Forester's rear seats are more than adequate for adults over long journeys.

At the same time, the Forester's right-sized footprint and clever packaging mean there's more than enough room for stuff. With the second row in place, there's up to 35.4 cubic feet of space – that's positively vast for a vehicle that's just over 15 feet long. Fold the second row down, and the cargo hold swells to 76.1 cubic feet. Combine that with a high-opening tailgate, a wide aperture, and a relatively low lift-over height for a crossover, and only the sheer accessibility of the space can overshadow the Forester's impressive versatility.

After years of dismal infotainment systems, the Forester’s is now firmly in the better half of the segment, particularly with its optional 8.0-inch touchscreen setup (a 6.5-inch unit is standard). Easy to read even in sunlight, quick to respond to inputs, and intelligently laid out, the system is very easy to figure out. And even if you don't like the updated operating system, Apple CarPlay and Android Auto are both standard on every trim level.

Our tester featured the Limited's sole option pack, a $1,695 grouping that adds a navigation function to the infotainment system and, more importantly, replaces this trim’s six-speaker audio system with a far better nine-speaker Harman Kardon setup. It also adds a heated steering wheel, which is a must-have for drivers in the Snow Belt who are considering the Forester for its standard all-wheel drive.

Pour one out for the dearly departed Forester XT and its WRX-sourced, turbocharged 2.0-liter engine. We miss it dearly.

The sole engine for 2019 is a ho-hum naturally aspirated 2.5-liter four-cylinder with 182 horsepower and 176 pound-feet of torque. Helping move the 3,541-pound crossover is a continuously variable transmission (CVT) that packs a Captain America-caliber can-do attitude, which helps the Forester offer nippy performance at low speeds. It's hardly a tire-scorching alliance, but the combo of all-wheel-drive immediacy, a smart CVT, and a surprisingly smooth Boxer engine makes the Forester a pleasant companion in everyday driving, even if the powertrain is incapable of getting the two-box CUV anywhere particularly quickly.

The rest of the Forester's performance package is familiar. There's a four-wheel independent suspension that does a good job of keeping the crossover from feeling sloppy, despite its 8.7-inches of ground clearance. On bumpy roads, the ride is planted and composed, with little of the drama inherent in Michigan's pockmarked tarmac making its way into the cabin. An engaging handler, though, this is not. The tuning is simply too soft and the center of gravity too high to make hustling the Forester through a corner fun.

That ride height and the X-Mode off-road system does allow impressive off-road capability. X-Mode adjusts the throttle, transmission, and all-wheel-drive torque split to offer sure-footed capability in rougher conditions. The only thing in this segment that can best the Forester comes from Jeep, so if you dislike the Cherokee Trailhawk for its price, inefficiency, or perhaps its hood stripe, Subaru is the way to go.

Like every Subaru but the BRZ, the 2019 Forester is an Insurance Institute for Highway Safety (IIHS) Top Safety Pick Plus. It also packs a five-star overall safety rating from the National Highway Traffic Safety Administration (NHTSA). Thanks for much of those plaudits goes to the Forester's standard EyeSight active safety system.

Every version of this vehicle comes with EyeSight, which includes automatic emergency braking, lane-keep assist, and adaptive cruise control. Upgrading to the Limited adds automatic high beams and blind-spot monitoring to the ticket, as well. Owners of this trim can option in reverse automatic emergency braking. LED headlights are standard on every trim, although only the Limited and Touring get active front lights, which earn the highest marks from the IIHS (the safety board rates the standard LEDs as “Acceptable” instead of “Good”).

In practice, these systems work impressively well. The adaptive cruise control is smart and composed, and the threshold for getting the forward collision warning to kick in is just right. We also like that Subaru puts the buttons for these systems relatively out of the way. Instead of stowing them near the driver's left knee or hiding the settings in a menu on the digital display in the instrument cluster, Subaru tucked the two small buttons up in the headliner, near the controls for the panoramic sunroof.

Ignore the 10.8miles per gallon rating in the photo gallery. We shot these images immediately after the Forester was delivered and had its trip computer reset. In reality, the 2.5-liter flat-four engine nets an EPA-estimated 26 mpg city, 33 highway, and 29 combined, all while operating on 87-octane fuel.

A comparable Honda CR-V with its turbocharged, 1.5-liter engine and all-wheel drive nets EPA estimates of 27 city, 33 highway, and 29 combined while the all-wheel-drive Toyota RAV4 returns 25 city, 33 highway, and 28 combined. The Forester is significantly more efficient than the only competitor that surpasses its off-road potential: the Jeep Cherokee returns just 20 mpg city, 27 highway, and 23 combined with its turbocharged 2.0-liter engine and mid-range Active Drive II all-wheel-drive system. That said, it offers significantly more power.

Pricing for the 2019 Forester start at $24,295. The Limited featured here sits just below the range-topping Touring trim and retails for $30,795. The only available option pack, a $1,695 suite that includes a navigation function for the 8.0-inch touchscreen infotainment system, rear automatic emergency braking, and a Harman Kardon audio system, drove this Forester’s as-tested price up to $33,465, including a $975 destination charge.

For comparison, the Honda CR-V LX and Mazda CX-5 Sport start at $24,350, while the Toyota RAV4 LE demands $25,650. Each of those prices, though, is for the front-drive variant – all three of the Forester's Japanese rivals charge $1,400 for all-wheel drive while Subaru makes it standard. When you start moving to loftier trim packages, though, things start to balance out.

For example, a CR-V EX-L with all-wheel drive starts at $31,150 and comes with a punchier turbocharged engine, as well as an upgraded audio system and blind-spot monitoring. A Mazda CX-5 Grand Touring with all-wheel drive requires $32,690, but broadly matches the Forester’s equipment. An available GT Premium Package pushes it above the Subaru with ventilated seats and traffic-sign recognition but adds $1,625 to the price. As for the Toyota, the RAV4 XLE Premium rings in at $31,050, although it demands extra for heated seats, a heated steering wheel, an upgraded audio system, and an 8.0-inch infotainment display. It's also missing Android Auto.