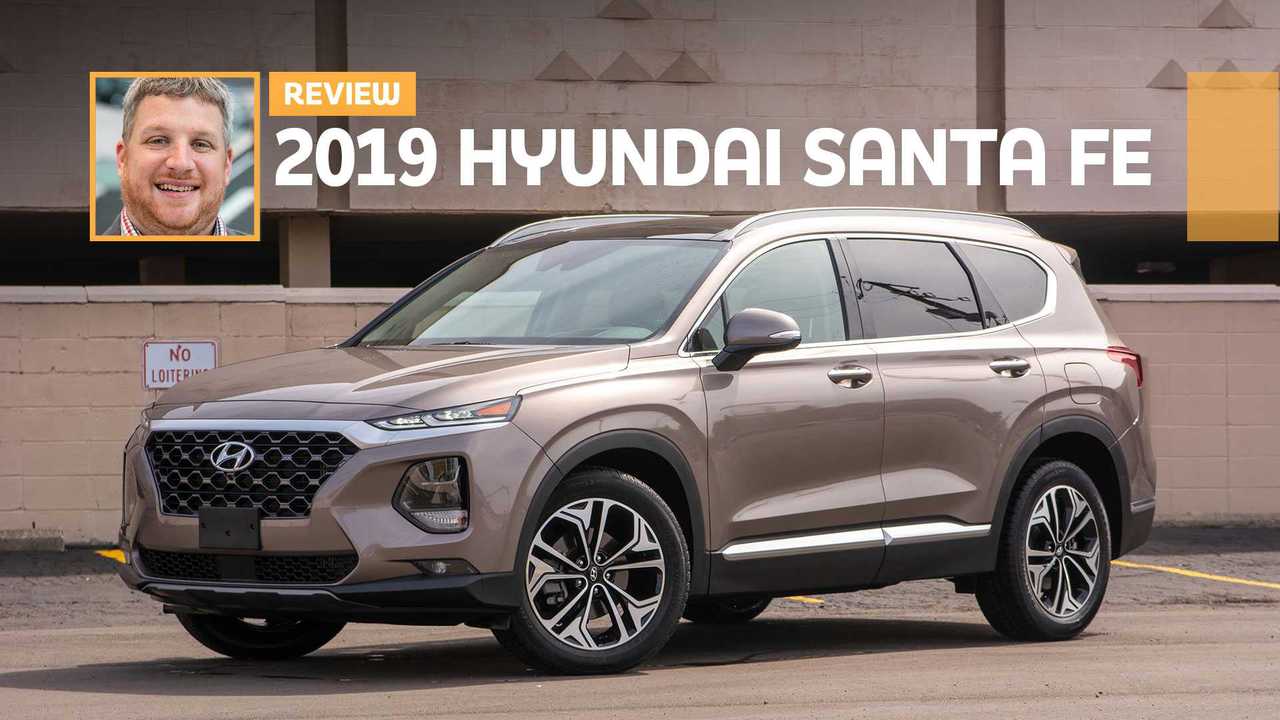 It used to be that automakers saved their best, newest technology for the flagship models. You know, the cars and SUVs that are the best expression of the brand's values and abilities. But the last several years have seen the democratization of popular, high-tech equipment.

Getting Around Santa Fe:

Today, it's not unusual to find advanced active safety equipment, digital instrument clusters, audio systems with absurd speaker counts, or flashy, futuristic gear like head-up displays and wireless phone chargers in an automaker’s moderately priced vehicles and their priciest models alike. The 2019 Hyundai Santa Fe is just such an example.

Oh sure, you can get it with scant few options and a suitably low price. But if you have the means, it's possible to build this family-friendly crossover into a luxurious package, just like the Santa Fe we've been testing.

Now that we've gotten used to it, the Santa Fe's extensive redesign has grown on us. That's thanks in no small part to the inspiration it’s lent to the Kona and Palisade, Hyundai’s two newest crossovers.

High-mounted slim LED running lights, neatly integrated as close to the hood as possible, sit above more traditional headlights. The lighting elements sandwich a thin strip of silver, which also serves as the top of the grille surround. The glossy black grille is prominent, almost snout-like, and while the Santa Fe's treatment isn't nearly as aggressive as the new Palisade’s, it's still a polarizing style. Fortunately, it looks much nicer in person than in photographs.

The conservative style of the Santa Fe's tail contrasts with the progressive design of its fascia. In other words, it's pretty darn dull. This is a far more evolutionary take, with modest changes to the taillights, rear hatch, and bumpers, as if designers merely smoothed over last year's model. The rear is nice-enough to look at, but it feels a little strange that Hyundai did so much to the front of the Santa Fe while merely massaging the opposite end.

The cabin takes its inspiration from the front end, in that, for better or worse, it represents a broader departure from the previous generation. The Santa Fe gets the tablet-style infotainment screen that’s infiltrating the industry nowadays. Flanked by quick-access buttons for the system's different functions and round knobs for adjusting the volume and radio tuning, the design is functional even if it isn't especially attractive.

Beyond that touch, the rest of the interior is a fine enough place, with pleasant shapes and a clever layout for the climate controls. Bits of plastic trim run from the door panels and curve into the dash, while the speaker grilles feature a neat three-dimensional effect. Coarse, contrasting French contrast stitching is present everywhere and feels suitably haughty for a mid-size crossover.

The Santa Fe sits in a strange place in the market, smaller than traditional mid-size crossovers but quite a bit larger than compact variants. That in-betweener status doesn’t change the fact that each of its seats is quite comfortable and spacious, while the overall cabin experience is quiet and pleasant.

Get behind the wheel and there's a supportive, roomy front seat finished (in the case of our tester) in leather trim. An eight-way power seat is standard and the steering is manually adjustable, but that's par for the course here. From the driver's seat, visibility is excellent forward and rearward, with manageably small blind spots over the shoulders.

The second-row bench is nearly as good, with its 40.9 inches of legroom exceeding the Nissan Murano (38.7), Chevrolet Blazer (39.6), and Ford Edge (40.6). That means there's plenty of room for adults when tall folks are in front. Cargo space is ample, too, with the Santa Fe's cargo hold – 35.9 cubic feet with the second row in place, 71.3 maximum – slotting between the Blazer and the slightly more capacious Murano and Edge.

The Santa Fe's string of interior successes ends when it gets moving, not because its ability to control noise, vibration, and harshness is especially bad, but because NVH control here is merely average. The suspension and sound deadening and laminated glass does an adequate job of isolating the cabin, but there's little mistaking the Santa Fe at 70 miles per hour for anything but a mid-size crossover from a mainstream automaker. There's wind and tire noise, but it's nothing the 12-speaker surround audio system can't drown out.

Tech is the name of the game in this segment and the Santa Fe ticks the boxes with much of the same desirable gear as the competition. Every model gets at least a 7.0-inch touchscreen with Apple CarPlay and Android Auto compatibility and a host of high-end active safety gear (adaptive cruise control, automatic high beams, and most importantly, automatic emergency braking), but our Ultimate trim adds nearly everything in the Hyundai catalog.

Hyundai simplified the Santa Fe's trim walk for 2020, so our 2019 Santa Fe Ultimate is no longer available. That said, the 2020 Limited is largely analogous, adding the Ultimate's driver's side thigh extension and four-way lumbar adjustment, heated outboard rear seats, 8.0-inch touchscreen infotainment system, head-up display, and surround-view camera to a roster that already includes LED headlights and taillights and leather upholstery, as well as all the gear from the SE and SEL trims.

But the 8.0-inch touchscreen is merely average in a class that's dominated by FCA's Uconnect system. The familiar operating system (Hyundai has been using some version of this setup since the early 2010s) is easy to navigate and the screen itself is quick to respond to inputs. The fact that there are analog buttons for jumping between systems is a welcome feature, as are the volume and tuning knobs.

A 7.0-inch display in the instrument cluster complements the center screen. Like that unit, the digital gauge is attractive and smartly laid out. It lacks some of the versatility of full digital clusters, although those don't exist in this segment yet. Look to this screen for a digital speedometer and gear indicator, as well as a center section that houses numerous information pages.

Hyundai continues to offer the Santa Fe with two engines. The base, naturally aspirated 2.4-liter four-cylinder is a modest thing, generating just 185 horsepower and 178 pound-feet of torque. We'd strongly recommend upgrading to the turbocharged 2.0-liter four-cylinder model, which packs 235 horsepower and 260 pound-feet of torque. Regardless of which you choose, the performance of this crossover, as indicated by our score, is merely average.

Despite the significant increase in output, competitors with similarly sized engines outgun our turbocharged Santa Fe testers. The Ford Edge's blown 2.0-liter offers 250 hp and 280 lb-ft of torque, while the optional four-cylinder in the Jeep Cherokee packs an impressive 270 hp and 295 lb-ft (not to mention the available 3.2-liter V6). But the Santa Fe adds insult to injury with a curb weight that brushes against 4,100 pounds. All of this is to say that the Santa Fe is not especially fleet.

There's abundant low-end torque, though, with peak output spanning 1,500 to 3,500 rpm. The Santa Fe certainly has no problem getting off the line. But the engine quickly runs out of steam as the torque tapers off, and the 2.0-liter struggles with the excessive curb weight while managing the 2,500 rpm between its peak torque and peak horsepower output. In the engine's favor, though, is a smooth and predictable character. You know exactly how this engine is going to respond while applying pressure to the linear accelerator. It even sounds smooth and pleasant.

It's this lack of power, rather than any issues with the eight-speed automatic, that make the Santa Fe more of a handful on the highway. Add enough throttle to drop a gear and the transmission responds readily. At the same time, the gearbox is willing to engage off the line and swaps up quickly and with little shift shock. It's a solid transmission that deserves a more potent engine.

Every Santa Fe rides atop MacPherson struts in front and a multi-link suspension in back. You won't confuse the Santa Fe with a CX-5, but it's composed when presented with a bend. Feedback through the chassis is as limited as anything else in the segment, while the steering is especially numb. Neither of these are egregious problems in this class, though, and among its competitors, the Santa Fe feels merely average in its vagueness.

Beyond things that the safety authorities rate, Hyundai adds two notably smart features. Every trim gets some form of rear-occupant reminder system, while all variants but the base model feature a safe-exit system that can warn passengers of oncoming traffic while attempting to open their doors.

But there's little getting away from the fact that similarly heavy, more powerful rivals return better fuel economy. The 250-hp Ford Edge returns 21 mpg city, 28 highway, and 23 combined and the 270-hp Cherokee is good for up to 21 city, 29 highway, and 24 combined.

Prices for the 2020 Santa Fe start at $25,900, although such a vehicle has just front-wheel drive, a naturally aspirated engine, and a spattering of equipment. If you want the Limited and its impressive equipment roster, turbocharged engine, and standard all-wheel drive, plan on ponying up $38,595 for front-wheel drive or $40,295 for all-wheel drive. Nearly $40,000 for a two-row crossover is pretty dear, but it's not that much more than similarly equipped competition.

Take the Ford Edge Titanium. Its $29,995 starting price is higher than a base Santa Fe while a fully optioned example is dearer to the tune of $46,645. On the flip side, the compact Buick Envision carries more brand cache to go along with its $31,995 starting price. Going for the range-topping trim results in a $45,290 starting price including destination, but the Envision's tomb-like, well-appointed cabin is a step above the Santa Fe’s and makes the higher price worthwhile. 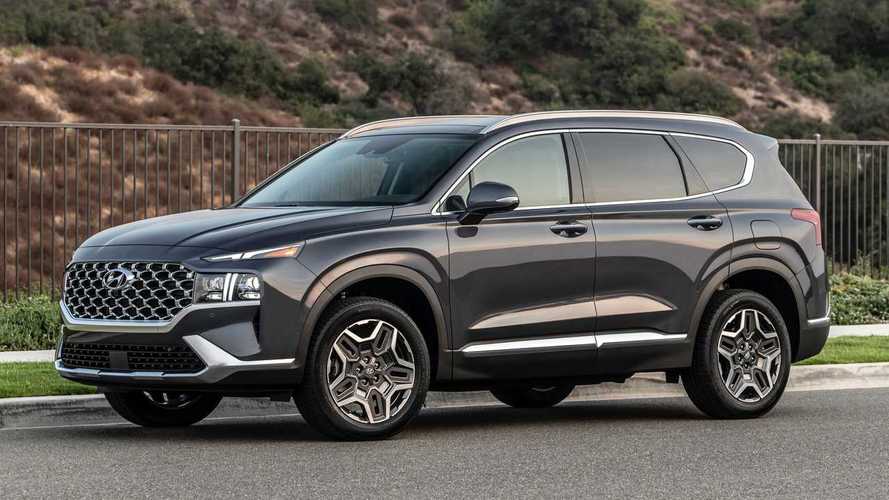