Competition in the compact crossover space seems like it's as hot as it can be. As customers clamor for these high-riding, two-row, five-door vehicles, the automakers behind them are pouring resources into building better CUVs. That means more technology, more style, nicer interiors, and cutting-edge safety is increasingly common in North America's favorite vehicle segment. 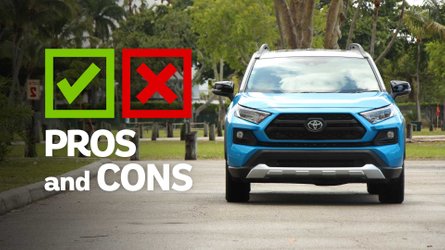 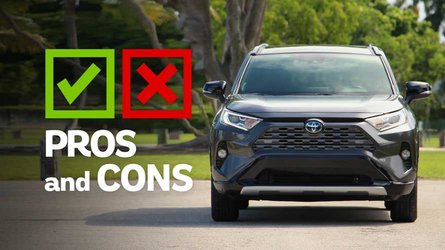 Case in point, the 2019 Toyota RAV4. Its predecessor was hard to recommend when Honda and Mazda were building such superior competition. But Toyota redoubled its efforts as part of the RAV4’s latest redesign, adding a far nicer, more comfortable cabin, along with a host of active safety technology that’s all available as standard equipment.

But if you were hoping the new RAV4 can challenge the Honda CR-V, let alone the Mazda CX-5, on a twisty road, don’t. This Toyota still has a hum-drum powertrain, with a buzzy, peaky engine; a sluggish transmission; and uninspiring handling. And perhaps more critical to customers, the new Toyota doesn’t do much to trump its rivals with cargo space or in-cabin tech.

Scores updated to new rating system in March 2021. A vehicle's ratings are relative only to its own segment and not the new-vehicle market as a whole. For more on how Motor1.com rates cars, click here.

Our Limited trim represents the highest spec for the 2019 RAV4 and starts at a heady $33,500. Adding the new torque-vectoring all-wheel-drive system carries a $1,400 premium, while our test car also features the $1,015 Limited Grade Weather Package (heated steering wheel; heated and vented front seats; reclining, heated rear seats; and rain-sensing wipers), the $580 Entune navigation system and JBL audio package, and a $1,025 Limited Grade Advanced Technology Package (proximity key, foot-activated liftgate, 360-degree camera, and a wireless charge pad). Along with a very reasonably priced panoramic sunroof ($200) and a $269 set of floor mats, this RAV4 Limited’s as-tested price sits at $39,034. That's almost as expensive as this car gets.

Chunky and angular, the 2019 RAV4 is far from the most attractive vehicle in the segment. But unlike its predecessor, which felt like it was designed by committee, there’s some personality and flair here. Toyota’s expansive history of off-road vehicles has influenced the RAV4’s designers to adopt a rugged style that almost looks purposeful. The upper element of the intake gives the impression that the RAV4 has a usable approach angle, while the grille itself takes more than a little inspiration from Toyota’s likable 4Runner.

The profile is also stylish thanks to the aggressively raked D-pillar and boxy wheel arches. In back, the taillights jut out awkwardly, while the overall design reminds us of a generation-old Lexus. Even the range-topping Limited trim wears a black plastic bumper that feels old and cheap. Overall, the exterior seems to scream “I’m capable, really, I am!”

The cabin continues that trend, but the execution is far more pleasant. Sitting in the comfortable, well-bolstered driver’s seat, the primary interfaces feel solid and substantial. The gear lever has a large, squarish knob, and it sits atop a high center console that gives the RAV4’s cabin a cockpit-like feel. A squat, horizontally oriented dash dominates the cabin, and it’s finished in attractive faux leather on our Limited tester. The steering wheel is small and has a thick rim with adequate padding. Taken as a whole, the new RAV4 is at least a nicer thing to look at from behind the wheel.

It’s also a much nicer place to sit, as well. These front chairs are surprisingly wide and supportive, with large side bolsters. A greater range of adjustment would be nice, but the new seats are a definite upgrade over the last-generation’s. That our tester includes the optional heated/ventilated function in front is merely a bonus.

The second row is no penalty box, either, with ample leg and headroom. With the driver’s seat set for your six-foot, one-inch author, we still had plenty of space in the back row. The doors open wide and provide a big enough aperture, so climbing in and out is easy. The bench seat is also nicely padded, and the angle on the backrest is spot on. Overall, we wouldn’t complain about spending a road trip in the RAV4’s second row.

Noise, vibration, and harshness are generally good, although Toyota needs to muzzle the RAV4’s standard 2.5-liter engine. Under heavy throttle, its buzz reverberates through the cabin. Avoid wide-open throttle whenever possible.

The attractive screen relies on a dark theme that’s easy on the eyes both during the day and at night. It features a familiar architecture, so customers from older Toyota products should have no problem acclimating to the layout of the different menus and systems. Helping newcomers are the physical buttons on each side of the screen, which allow immediate access to the main sections of the infotainment system. The display itself is attractive and quick to respond to inputs. It’s an unassuming setup that should prove an able companion for everyday use.

Apple CarPlay is standard – finally – but fans of Google’s Android operating system will need to rely on Toyota’s standard interface, as the RAV4 does not feature Android Auto capability. That could change on future products and will hopefully include a retrofit for owners of older vehicles.

The 2019 RAV4 is an inoffensive companion in everyday driving, handling the tedious duties of bumper-to-bumper traffic and stoplight acceleration without complaint. At the heart of these modest talents is a 2.5-liter naturally aspirated four-cylinder that generates 203 horsepower and 184 pound-feet of torque.

Those figures are neither exciting nor inadequate – the RAV4 can keep up with the pace of traffic without strain, which is a good thing because the engine sounds lousy under heavy load. Off the line, there’s suitable torque, although, at freeway speeds, heavier throttle is necessary for passing. But the lack of a more potent option to stand up to the optional turbocharged engines the RAV’s rivals are carrying is glaring.

The RAV4’s standard eight-speed automatic is merely okay. It tends to hunt too much on downshifts, and it’s too relaxed while upshifting, even in Sport mode. Yeah, the RAV4 gets a bunch of driving modes for 2019. We didn’t have cause to sample the Mud/Sand, Snow, or Rock/Dirt mode, and we highly doubt any RAV4 consumer will either. Aside from the torque-vectoring all-wheel-drive system, there’s no real off-road gear to speak of – if you want a low-range gearbox or a locking differential in a Toyota, plan on ponying up for a 4Runner.

That’s not to discount the goodness of the all-wheel drive. The torque-vectoring system gives the RAV4 a noticeable pep when accelerating out of corners. The CUV feels more eager and entertaining once back on the power, which is good – most of the time it feels lifeless and uninspiring in the bends.

Overall, the RAV4 lacks the agility of a Honda CR-V or the aggressive handling character and the sharp steering of a Mazda CX-5. Instead, it rolls heavily from side to side and does little to communicate to its driver. At the very least, though, it is comfortable on rougher roads and doesn’t exhibit much in the way of bad behavior.

Here’s some effusive praise for Toyota: It’s building some of the safest new cars this side of Volvo. Every version of the RAV4 comes standard with Toyota Safety Sense 2.0, a comprehensive safety suite that includes adaptive cruise control, full-speed automatic emergency braking with pedestrian and cyclist protection (pedestrian detection even works in low-light situations), lane departure warning with steering assistance, lane keeping assist, and automatic high beams that work alongside standard LED headlights. Among its rivals, only Honda comes close.

Neither of the big crash testers has sampled the 2019 RAV4. The 2018 model, though, was rated a Top Safety Pick by the Insurance Institute for Highway Safety while the National Highway Traffic Safety Administration rated it five stars overall. The previous generation CUV struggled in NHTSA’s small overlap front crash test on the passenger side only. It’s incredibly likely that the improved 2019 will receive a Top Safety Pick Plus rating while retaining its overall five-star NHTSA score.

If fuel economy is essential, Toyota will introduce a RAV4 Hybrid soon. Last year’s model netted 34 mpg in the city, 30 mpg on the highway, and 32 mpg combined. We’d expect the next-gen RAV4 Hybrid to improve on those figures by at least a couple points.