Still the adult in the compact sedan room.

Despite the rise of the crossover, automakers have remained particularly loyal to compact sedans. Every mainstream Japanese brand has an entry. Ditto Hyundai and Kia. And while the Ford Focus, Chevrolet Cruze, and Dodge Dart have taken their place in the big scrapheap in the sky, even Germany's Volkswagen continues to play in this popular segment.

But the Volkswagen Jetta, particularly in its current form guise, has always represented a somewhat different approach to affordable four-doors. Where other products rely on youthful verve and excessive design, the Jetta has always felt more grown up and (for the most part) more premium because of it. The latest model strikes the right balance again with its attractive, low-key demeanor and relaxed driving character, but while that was good enough over the years, it may not be in 2021.

With an EPA-estimated efficiency rating of 30 mpg city, 40 highway, and 34 combined, the Jetta is one of the most efficient gas-only compact sedans around. And while our fuel economy just barely scratched the city rating, the mixed conditions and frosty weather during our test left us convinced that the combined rating should be achievable in regular commuting. By comparison, the Honda Civic and its turbocharged 1.5-liter four-cylinder net ratings of 30 city, 38 highway, and 33 combined, while the Toyota Corolla lags at 29 city, 37 highway, and 32 combined.

The new Hyundai Elantra returns up to 33 city, 43 highway, and 37 combined, which is an impressive achievement, but the Jetta nets its rating while offering 187 pound-feet of torque to the Hyundai’s 132. We’ll happily sacrifice some of the Jetta’s efficiency for the added twist. Realistically, the only way to guarantee better fuel economy without giving up a boatload of torque is with a hybrid powertrain – the new Elantra Hybrid bests the Jetta’s torque rating and returns up to 54 mpg combined.

While the Jetta carries an ultra-low starting price of $19,695 (for an automatic-transmission model), the $27,495 SEL Premium trim still feels like a very impressive bargain from behind the wheel. The SEL Premium is the only trim with power seats, while the chairs themselves are “Comfort Sport” seats – we have no idea what makes them such, but they are both comfortable and supportive for a mainstream compact sedan. The Premium’s standard leather upholstery is a boon, too, while the nav-enabled 8.0-inch touchscreen and digital instrument cluster are uncommonly good for the class.

The lesser SEL has some of this gear, the same comprehensive active safety suite (adaptive cruise control, lane-keeping assist, and automatic emergency braking are standard on both top-end trims), and shaves $2,000 off the price tag. It's worth considering if price is an object, but we'd spend the extra on the powered seats and nav-enabled infotainment were it our money.

The Jetta features a relatively basic suspension setup, with front struts and a torsion beam out back, but it still manages to wow with its ride comfort. The tuning is soft and relaxed, and with modest 17-inch wheels shod in 55-series rubber, the Jetta isolates its driver in a way that's unusual for a compact sedan. It's serene at highway speed, allowing this German to excel in the sort of dull, unexciting commuting that makes up most of a vehicle's daily duties. Overall, this is a far less dynamic but arguably more comfortable offering than what you'll find elsewhere in the class. 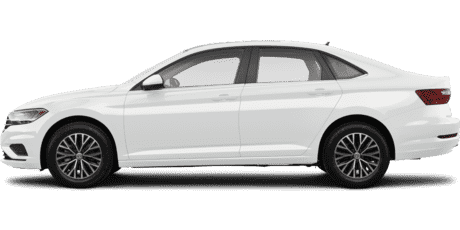 Powertrain Leaves A Lot To Be Desired

Aside from the sporty GLI, every Jetta comes with a turbocharged 1.4-liter engine (for now), while most feature a standard eight-speed automatic (the base and R-Line are available with a six-speed manual that shaves $800 off the price). This is an uninspired powertrain, with just 147 horsepower and 184 pound-feet of torque – the Jetta's performance is functional for everyday driving, with adequate low-end torque, but it sounds lousy when pushed and runs out of steam well before its already-low 6,000-rpm redline.

The eight-speed automatic is slow to engage off the line, leading to some jerky behavior if you apply sudden throttle from a standstill as the computers struggle to get the power to the front wheels. Compact sedans are hardly paragons of driving joy, but it's hard to consider the Jetta's performance alongside more pleasant, powerful offerings like the Mazda3.

Feels A Bit Anonymous Relative To The Competition

Yeah, we like the minimalist design of the Jetta. It's clean and simple. But with compact cars predominantly focused on younger adults, the Jetta, which once counted itself as the king of youthful sedans in the 2000s, feels stodgy and out of touch. That's doubly true when viewed alongside the polarizing Honda Civic, the gorgeous Mazda3, or the extreme Hyundai Elantra. This is not a bad design, but it's also far from exciting, and that could be problematic for the younger shoppers the Jetta has long succeeded in attracting.

Crossovers are king, which may explain the relatively few Jetta variants out there. You can have one of the five mainline trims (S, SE, R-Line, SEL, and SEL Premium) or the sporty GLI, and that's about it. There are no plans for a hybrid model, no real competitor for the upcoming Elantra N (aside from some old rumors), and just the simple four-door body style – nothing to compete with the Civic or Mazda hatchbacks. The only way someone shops for a Jetta is if they're dead set on a traditional sedan, and as hundreds of news reports have said, there just aren't that many people looking for such a thing.

If You Want A Sportier Jetta: