It may look different, but the new Nissan Kicks is still as good as ever.

Since it debuted in 2016, the Nissan Kicks has been a vehicle that we highly recommend. While it may not be the flashiest nor the fastest subcompact crossover, the Kicks is one of the best all-around options. It offers excellent interior space, solid dynamics, and some of the most advanced safety in the segment – plus it costs less than $20,000 to start.

The 2021 Nissan Kicks is no different. It follows the same basic formula as its predecessor but does so with a different face (for better or worse). Designers tweaked the front and rear styling, while also adding a few visual upgrades and tech improvements inside. Although it may be a bit more polarizing now, the newest Kicks is still the sublime subcompact it’s always been.

My, What A Face

The outgoing version of the Kicks had a clean, simple design that we really liked, but the 2021 model gets a bit fussier via a front end that doesn't work as well in our opinion. The company calls the new nose a “Double V-Motion grille,” and it litters the fascia with shiny black plastic and faux chrome trim pieces, flanked by larger headlights (LED units in the case of our SR tester). But it's a lot of face for such a small car and it doesn't totally jive with the rest of the design, which carries over from last year almost totally unchanged.

The only other visual upgrade of note, apart from some fresh 17-inch wheel options, is a slim light bar in the rear that connects the taillight fixtures. It looks good, affording the Kicks a slightly more modern expression. The 2021 model also adds more than half a dozen two-tone body-and-roof paint options that offer bolder looks; the Aspen White body and Super Black roof on our tester is an especially sharp combo.

The upgrades to the inside of the 2021 Nissan Kicks are even more subtle. The premium seats on the SR model wear nice leatherette – same as the dash – and don a refreshed three-tone design with new colors and updated stitching. The knobs and switches have the same high-quality heft as before, and the vehicle information display in the instrument cluster carries over from last year, offering clean readouts for things like safety and fuel economy.

The base Kicks gets a 7.0-inch touchscreen that now comes standard with Apple CarPlay and Android Auto. But on the SV and SR models, there's an optional 8.0-inch screen that makes things a bit more seamless. The larger screen has the same logical home layout as before and still responds quickly to inputs, only it's all a bit easier to use thanks to the expanded surface area.

The same headrest-embedded Bose Personal Plus audio system carries over, and four USB ports now dot the cabin – including a lone USB-C up front. Buyers can even select the option of a Wi-Fi hotspot on the 2021 Kicks. That's a rare amenity for this segment.

In terms of space, the 2021 Kicks keeps its best-in-class crown with an impressive 25.3 cubic feet of cargo space behind the second row.

Two of the biggest selling points for the Kicks remain: safety and space. For 2021, every Kicks comes standard with the brand's Safety Shield 360, which includes front and rear automatic emergency braking. Nissan is still the only automaker to offer that last feature on a CUV under $20,000. Our SR tester also gets blind-spot monitoring, rear-cross traffic alert, and adaptive cruise control with distance assist.

In terms of space, the 2021 Kicks keeps its best-in-class crown with an impressive 25.3 cubic feet of cargo space behind the second row. It also boasts a nearly segment-best 33.2 inches of second-row legroom and 38.5 inches of headroom – only the Hyundai Venue is better (34.3 inches / 39.0 inches). 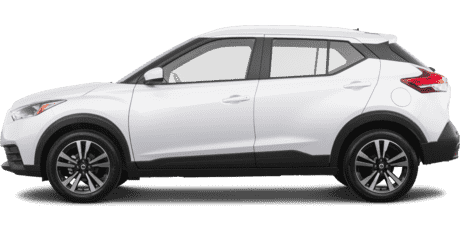 Another thing that doesn't change at all is what's under the hood of the 2021 Nissan Kicks. The same 1.6-liter four-cylinder engine producing 125 horsepower and 115 pound-feet of torque remains, and it's paired to a continuously variable transmission and front-wheel drive only. And there's still nothing offensive about the way the Kicks moves; there's just enough power around town, the suspension is relatively athletic, and the ride is cushy and supportive.

That said, the engine does start to wheeze at highway speeds and the CVT is a bit whiny at times. We spent a lot of time driving on the highway and found that it takes some serious pedal pressure to overtake at higher speeds. But that's true of almost every car in this class with a similar setup. The only performance upgrade Nissan did make for 2021 was replacing the rear drum brakes on the SV and SR models for discs.

One Of The Best

The biggest selling point of the 2021 Nissan Kicks, of course, is its price. Last year’s model cost a very affordable $19,070, and this year’s version only gets slightly pricier – it starts at $19,500 for the base S model (not including $1,095 for destination and handling). The SV model and the SR model tested here also should get slight price hikes, costing somewhere in the low $20,000s. Even with the minor price increase, the 2021 Nissan Kicks remains one of the best bargain options around.

Nissan didn’t make a ton of changes to the Kicks for 2021, and we appreciate the restraint – we just wish it extended to the questionable new face. This is still a very good small crossover with lots of space, solid driving character, and some of the best safety and fuel economy in the class. We recommend the 2021 Nissan Kicks to anyone looking for a small, affordable vehicle, whether or not we approve of the new look.