The perfect companion for your tiny house.

Ford has taken full advantage of the now three-decades-long SUV boom. Its lineup includes the compact Escape, midsize Edge, three-row Explorer, and big-enough-to-tow-a-boat Expedition (plus the Flex, whatever that thing is). Yet there’s always room for one more when it comes to SUVs, and since anything bigger than the Expedition would classify as construction equipment, the brand has gone smaller, adding the subcompact EcoSport to its SUV family. This interesting class of small, inexpensive, high-riding runabouts is already packed with competitors, but never count Ford out when it comes to SUVs. 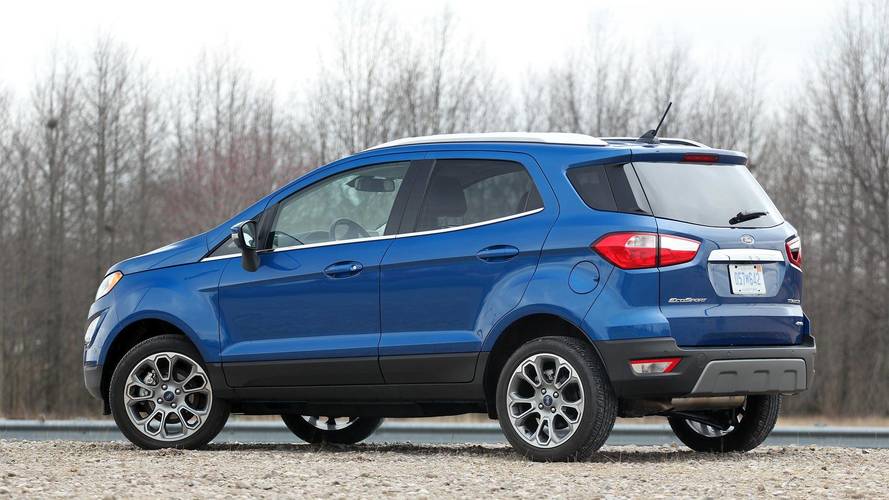 Truth be told, the EcoSport isn’t really an all-new vehicle; it’s been sold in South America since 2003, and it reached China, India, and other global markets when it was redesigned in 2012. That’s when this generation of the EcoSport came into being. Ford debuted a significant update for the second-generation model at the 2016 Los Angeles Auto Show, where an American-market version that would go on sale in 2018 was announced. And here it is.

Despite its diminutive size, the EcoSport looks for all the world like a real SUV. Its hexagonal-ish grille, large headlights, and faux skid plate are familiar Ford styling cues, and the 7.8 inches of ground clearance is a 1.5 inches more than a Chevy Trax can muster and half an inch higher than a Honda HR-V.

The cargo area, as well, is large enough to earn the U in SUV. While it may look compromised by the EcoSport’s short rear overhang, it offers a full 50.0 cubic feet of space with the rear seats folded forward (again, more than the Trax, though a bit less than the HR-V) and 21.0 cubic feet with them up, which is more space than the trunks of a Ford Fusion and Taurus. And yes, I should mention the EcoSport’s unique sideways-opening hatch. Shorter people may like not having to stand on tippy-toes to close it, but otherwise it’s more of a novelty (pro tip: the latch to open it is hidden in the passenger-side taillight).

Though it ticks all of the SUV boxes, the EcoSport is very small. If the Expedition were the average American home, the EcoSport would be a tiny house. It’s based on the same underpinnings as the Ford Fiesta, so it’s a basically an economy car on stilts. The interior is narrow in width, which means you’ll be rubbing elbows with whoever’s sitting shotgun, and rear seat head- and legroom are in short supply. A family vehicle this is not, but the EcoSport still makes sense for singles, childless couples, and empty nesters. 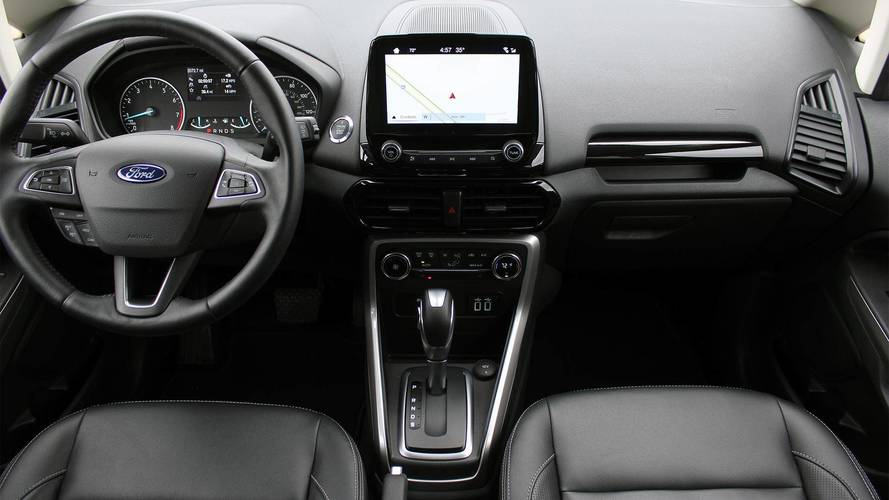 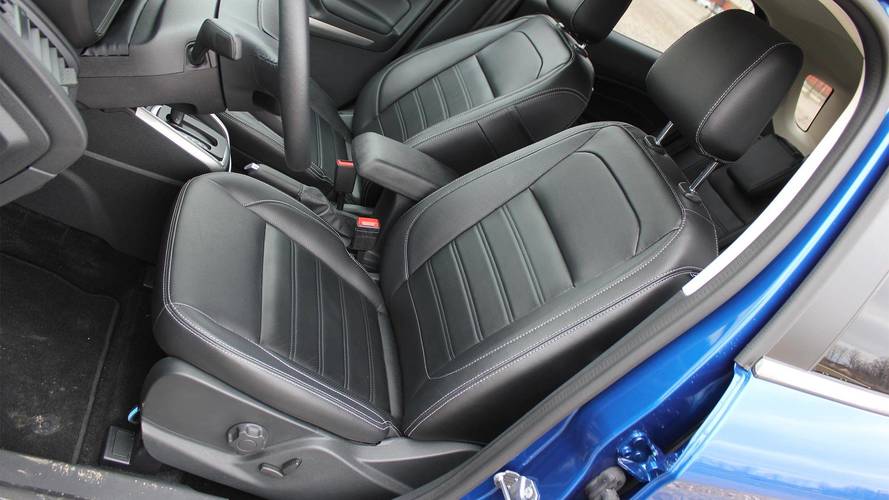 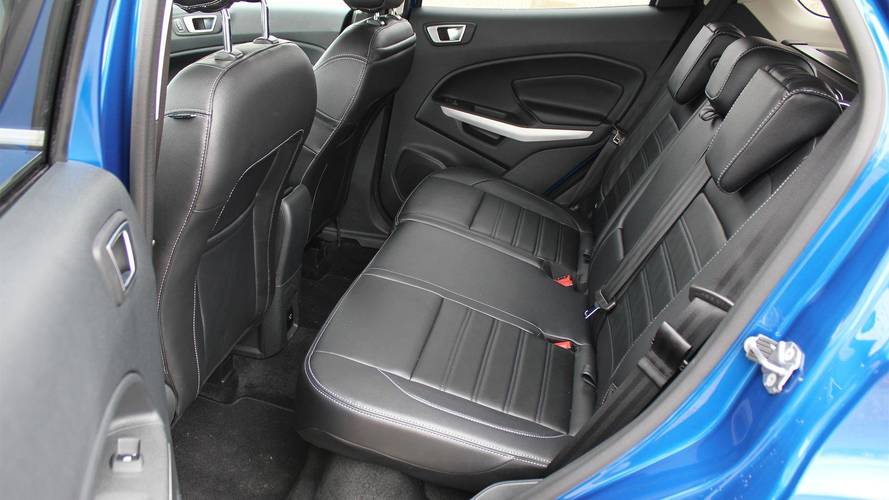 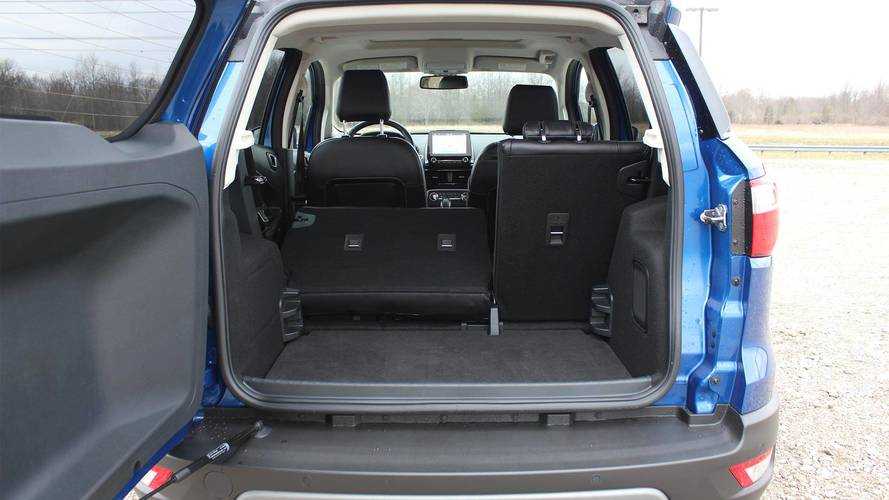 Compared to anything in its price range, though, a loaded EcoSport stands apart in terms of feature set.

That’s because the front two seats are the best ones in the house. There, at least, room is plentiful enough that your head and knees aren’t touching anything (though, again, your elbows might). And facing you from these chairs is a well-designed dashboard with more available premium features than a non-luxury car has a right to offer.

The fully loaded Titanium model I drove included an 8-inch touchscreen perched atop the leading edge of the dash (S, SE, and SES models come standard with either a 4.2- or 6.5-inch touchscreen), with the company’s latest Sync 3 infotainment software that features crisp graphics and snappy performance, Apple CarPlay and Android Auto, Amazon Alexa compatibility (a rarity in the industry, for now), and a 4G LTE-powered Wi-Fi hotspot for up to 10 devices.

That’s just the infotainment tech. You’ll also find unique features for a subcompact like push-button start with proximity keys for opening the doors hands-free, a 110-volt inverter with a household-style plug, full-leather seats (not just accents), rain-sensing wipers, heated mirrors and a heated steering wheel, and 10 speakers for the B&O Play sound system. It’s an impressive list of kit, perhaps enough to compete with the similarly sized but more expensive Buick Encore, an entry-level luxury competitor that’s currently burning up sales charts. Compared to anything in its price range, though, a loaded EcoSport stands apart in terms of feature set.

There are two engines offered: a turbocharged 1.0-liter three-cylinder engine and a naturally aspirated four-cylinder, both with automatic stop-start and both mated to a six-speed automatic transmission. Front-wheel-drive EcoSports get the 1.0-liter, which generates 123 horsepower and 125 pound-feet of torque. Shockingly, Ford even says it’s OK to tow with it, up to 1,400 lbs.

All-wheel-drive EcoSports like the one I drove, though, get the more powerful 2.0-liter engine, which produces a much stouter 166 hp and 149 lb-feet of torque. That may not sound like a lot, but consider it’s 26 and 29 hp more than the HR-V and Trax, respectively. The bigger motor lets you tow more, too, up to 2,000 pounds. That’s not a small thing, as many subcompact SUVs don’t permit towing at all.

With more power, though, comes lower fuel economy. The EcoSport, regardless of which engine you choose, is a mile-per-gallon or two behind its closest competition. Front-wheel-drive models with the smaller 1.0-liter engine can manage 28 miles per gallon combined, but the all-wheel-drive version with the 2.0-liter engine that I tested achieves only a lackluster 25 mpg combined, as well as 23 mpg in the city and 29 on the highway. And that’s with the inclusion of automatic start-stop. All-wheel drive versions of the Chevy Trax and Honda HR-V, meanwhile, score higher at 27 and 29 mpg combined, respectively. 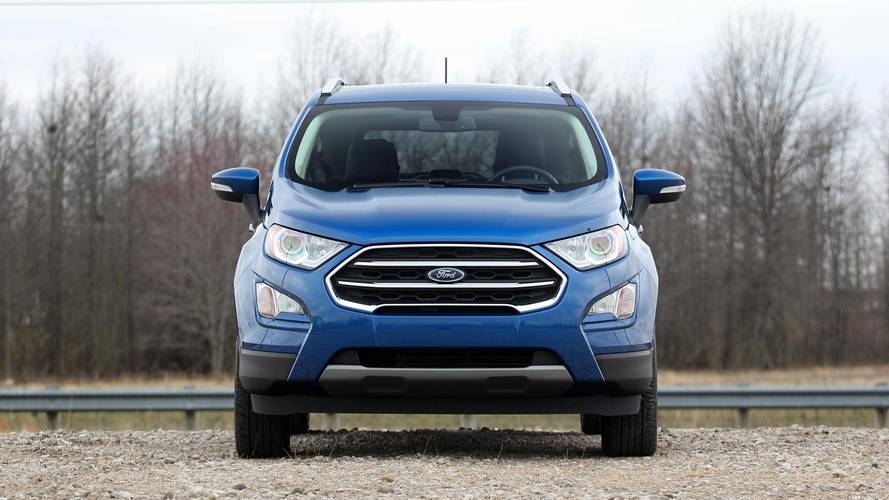 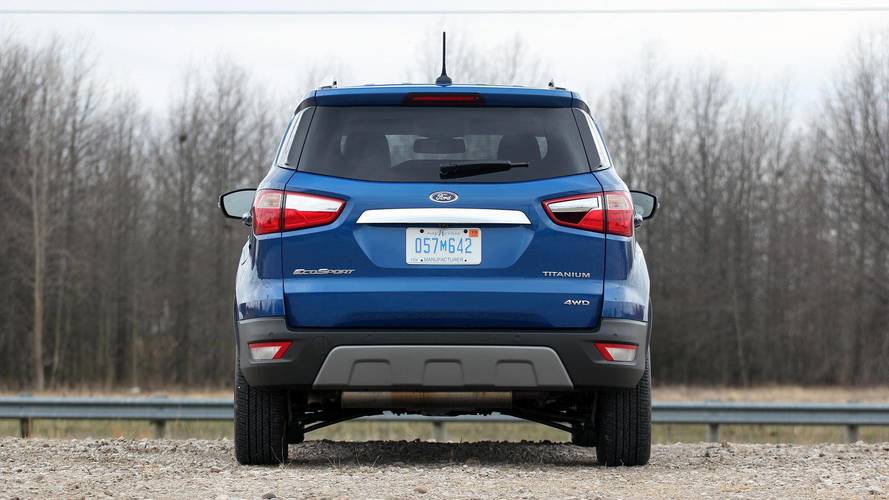 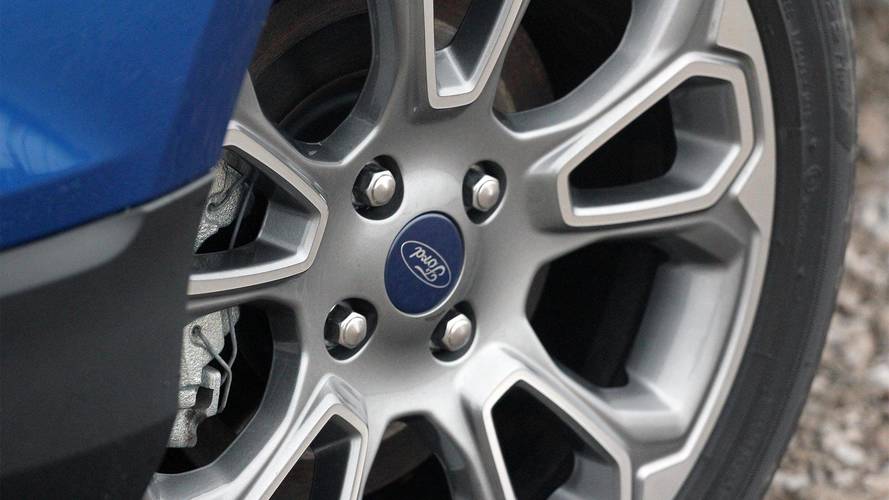 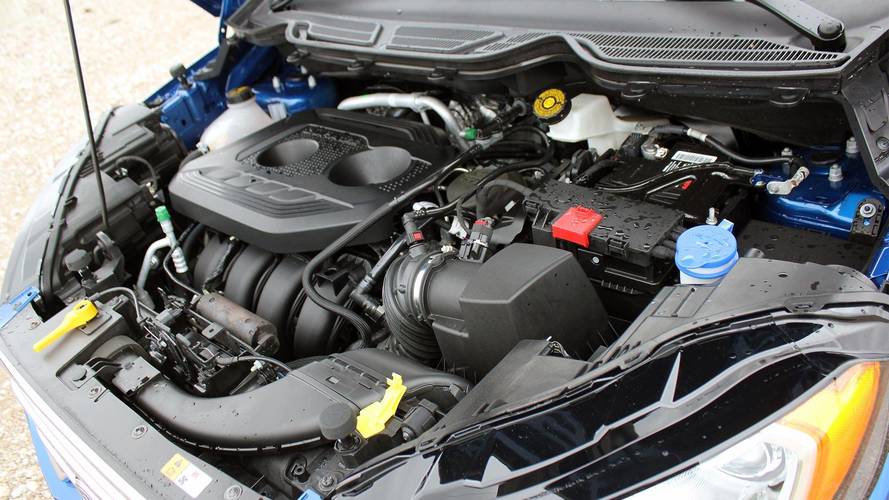 On the road, the EcoSport feels peppy, pulling away from stops with a bit of verve that makes driving it fun.

On the road, the EcoSport feels peppy, pulling away from stops with a bit of verve that makes driving it fun. It’s not, however, as entertaining as an equally peppy economy car because of its height and relatively high ground clearance. While those qualities provide drivers an upright seating position and clear view of the road, they contribute to top-heavy handling that doesn’t inspire confidence in turns. Keep the pace reasonable, though, and the EcoSport handles predictably, with an all-around ride that’s a bit firm but still comfortable.

It’s quiet for the class, too. Only the aforementioned Buick Encore is quieter inside (it comes with active noise-cancelling technology), or does as well isolating bumps from the driver and passenger. A luxury car it’s not, but at least in fully loaded Titanium spec, the EcoSport experience doesn’t feel cheap.

The list of safety features is solid as well, though like most subcompact SUVs in this price range, you still can’t get stuff like automatic emergency braking, radar-based cruise control, or a lane-keep assist system. Nevertheless, the EcoSport does come standard with a rearview camera and can be had with reverse sensors, a blind-spot warning system, and rear cross traffic alert.

Pricing for the EcoSport starts at $19,995 for the base S model. Above that are the SE ($23,000), Titanium ($25,880), and SES ($26,880) trim levels. Upgrading to all-wheel drive and the more powerful 2.0-liter engine can also be done on any trim level. There are ten color choices that are all fairly staid (nothing wild like Orange Cream Soda or Kale), six interior choices, and an ambient lighting system with customizable colors.

As a whole, the EcoSport presents itself as a mature, sophisticated, three-quarter-scale SUV that tries very hard not to feel cheap. It doesn’t always succeed, but it does so more than most subcompact SUVs. It’d be nice if the fuel economy were more impressive and the handling less top-heavy, but otherwise the newly immigrated EcoSport seems to have assimilated to its new life in America just fine.