It’s a weird one.

General Motors is preparing an EV onslaught, with new all-electric offerings in the works for each brand. But while we're excited over the Cadillac Lyriq, the GMC Hummer EV, and a particularly sexy electric Buick CUV, for now, GM's only gas-free offering is the humble Chevrolet Bolt EV.

There's enough to like about this small EV. Its range is more than adequate, with 260 miles, and the cabin easily accommodates four adults. But this EV's problems overshadow those positives.

Bring On The Bolt:

The dorky styling is one thing, but Chevrolet's overall direction with this car is bewildering. It's neither a true crossover nor a traditional hatchback – and soon, there will be a Bolt EUV to further confuse consumers – and because of that, the proportions are just bizarre. Cabin quality is disappointing, and limiting the Bolt to a DC charge rate of just around 50 kilowatts hurts its appeal to customers reliant on fast charging

The 2021 Bolt EV will receive updated styling both inside and out. But for 2020, the headlining feature is improved range. Now rated to return 259 miles to a single charge, the Bolt EV's 66-kilowatt-hour lithium-ion battery bests the base Tesla Model 3 and the Nissan Leaf. While it's possible to get a Model 3 with more than 250 miles per charge, the price will be a good bit higher than the $39,990 of the base Model 3 Standard Range Plus model. Every 2020 Bolt EV nets the EPA-estimated 259 miles.

The Bolt's odd proportions, its height in particular, pay dividends in the cabin. The front seats are spacious, with plenty of headroom both front and back, and more than enough second-row legroom. We wouldn't hesitate to toss four adults in the Bolt and then set off until the battery runs flat. The cabin is a comfortable place, too, with well-padded seats in front and a plush bench in back.

We list manufacturer suggested retail prices when talking about how much a car costs, because the world of incentives and rebates changes on a monthly basis – MSRPs provide consistency. But there are few cars where the MSRP is more misleading than the Bolt. Chevy lists this car with a starting price of $36,620 (not including destination), while our range-topping Premier starts at $41,020. But GM maintains an $8,500 cash allowance, likely in lieu of the exhausted federal income-tax credit. Most dealers here in metro Detroit, though, are offering nearer to $10,000 off. We found one retailer with seven Bolt's in stock, and the average price was just $28,900. Meanwhile, Motor1.com partner TrueCar lists a market average for the Bolt of just under $27,000. 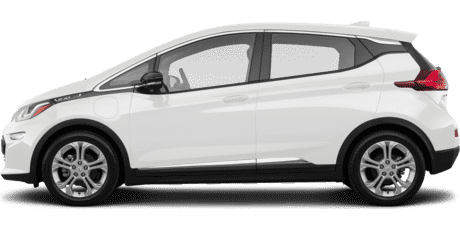 What was General Motors thinking in designing the Bolt? The Bolt is attractive enough (although the design definitely lacks panache – the 2021 refresh should help there), but this car isn't really sure what it's supposed to be. It's tall. Really tall. It's just 2.6 inches shorter (vertically) than a Chevrolet Equinox. But while the Equinox has an extra 4.9 inches between its axles, the crossover is over a foot and a half longer overall. The Bolt's proportions are wonky as hell, which emphasizes the nerdy design. Based on the Cadillac Lyriq, we know GM is capable of designing an attractive EV – we just wish it'd figured things out before penning the Bolt.

The updated 2021 Bolt EV makes significant improvements to the interior design and material quality, but that's still way off. For now, the Bolt EV suffers from mediocre plastics and unconvincing piano black trim, while the seat upholstery on our Premier tester's only redeeming quality is the nifty asymmetric design. The leather upholstery feels rubbery and cheap, too. If you can hold off on purchasing a Bolt until the refresh comes out, you'll be a lot happier.

Chevy upgraded the Bolt EV's range for 2020, but the maximum recharge rate at a DC fast charger is still just 50 kilowatts. The Hyundai Kona Electric can recharge at a reported rate of around 70 kilowatts. As for the Tesla Model 3, it can charge at up to 250 kilowatts and has access to Tesla's impressive network of Superchargers. To put that in perspective, Chevy says the Bolt EV can suck down 100 miles worth of electrons in 30 minutes. The Model 3 can add 172 miles in half that time.