Tesla has proven that electric vehicles can be cool and fashionable, rather than dorky appliances for eco warriors, and the mainstream industry is still catching up. In the case of the Nissan Leaf, one of the aforementioned dork cars, it's vastly improved using a design that's unquestionably better looking, but still just a little nerdier than your average five-door hatchback.

Nissan expanded the range of this EV from the first-gen model's 74 miles (barely acceptable, even when it debuted in the early 2010s) to 150 miles with the second-generation car, before introducing a Plus model with 226 miles of charge in 2019. While some may shout that this still isn't enough range, they're mostly just making noise – 226 miles is more than adequate for the vast majority of American consumers.

The Leaf Plus still comes up a bit short, though, particularly in its relatively slow charging speeds and a tech suite that, aside from the excellent ProPilot active safety system, feels antiquated. Finally, it's hard to look at our Leaf Plus SL's $45,000 price tag (before a $7,500 income-tax credit) without at least considering the more stylish, higher-performance, all-wheel-drive-equipped Tesla Model 3 Long Range, which starts at just under $49,000.

The standard Leaf's 150-mile range is probably adequate for most drivers in urban and suburban areas. The Leaf Plus' 226-mile range extends this car's reach to drivers well outside built-up areas. Even in chilly Michigan, where we tested the Leaf, we wouldn't worry about winter temperatures leaving us short on range (although pleasantly warm weather during testing kept us from evaluating the Leaf's cold-weather range).

The Leaf still won't win any design awards, but its overall style is far less polarizing than the first-gen car. Nissan resolved the car's odd details and added more modern styling cues, including a floating roof. This is a conventionally average car, the kind of thing you see everyday but rarely take note of. At the same time, taking a closer look at the Leaf's design reveals there's still some nerdiness. Little tricks for aerodynamics, like the textured, closed-off grille and the clever sculpting of the hood, prove that function inspired this design as well as form.

Nissan's ProPilot active safety suite is one of the best in the game, merging a number of systems into a cohesive, smart tool for highway driving. ProPilot will maintain the gap to the car in front and help keep the car centered, reducing the driver's stress level on long highway stints. Simply tap the ProPilot button and set your speed – once the Leaf locks itself in the lane, the system beeps to let the driver know all is well. It's a good setup, with little ping-ponging between lane markers or sudden braking events when a car pulls in front. That said, this is a hands-on system, closer to Volvo PilotAssist than Tesla AutoPilot. 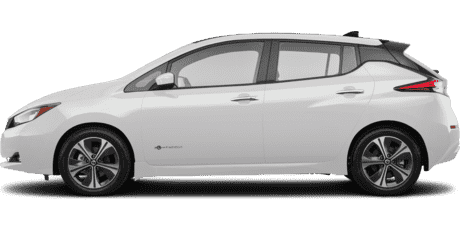 The Leaf Plus’ 62-kilowatt-hour lithium-ion battery pack can go from zero to 80 percent charge in 45 minutes on a 100-kilowatt DC fast charger. The only problem is that the Leaf relies on the CHAdeMO standard for fast charging, and at least here in southeast Michigan, there are no 100-kW chargers on that standard. That effectively means we could only fast-charge at 50 kW. At that speed, the Leaf’s battery can go from zero to 80 percent in an hour. A Level 2 (J1772) home charging station can fully replenish the Leaf Plus’ larger battery in 11.5 hours.

This doesn’t compare too favorably with other EVs, though. The Model 3 can access Tesla’s expansive network and recharge at up to 250 kW if you can find a station with the Supercharger V3. The Hyundai Kona EV, meanwhile, can charge at up to 72 kW.

While the new Leaf is far more enjoyable to drive than the first-generation model, it's not going to set hearts aflutter with its handling ability. This is a relaxed, uninspiring car, exhibiting ample body roll in corners and limited feedback through the over-light steering. That said, the ride is plenty comfortable, even on Michigan's pockmarked roads – the Leaf would make a fine partner for suburban commuting. It's suitably quick in a straight line, too, offering up 214 horsepower and 250 pound-feet of torque, but we'd advise against delusions of smoking Teslas at stoplights.

If range is your primary concern, the Chevrolet Bolt EV, Hyundai Kona EV, and Kia Niro EV offer vehicles that exceed the Leaf Plus' 226-mile range. Then there's the elephant in the room that is the Tesla Model 3. The all-wheel-drive version is faster, more stylish, and offers longer range. While we wouldn't recommend the $49,000 Model 3 Long Range against a cheaper model, if you're shopping for the range-topping Leaf Plus SL, the Tesla is a hard vehicle to ignore.