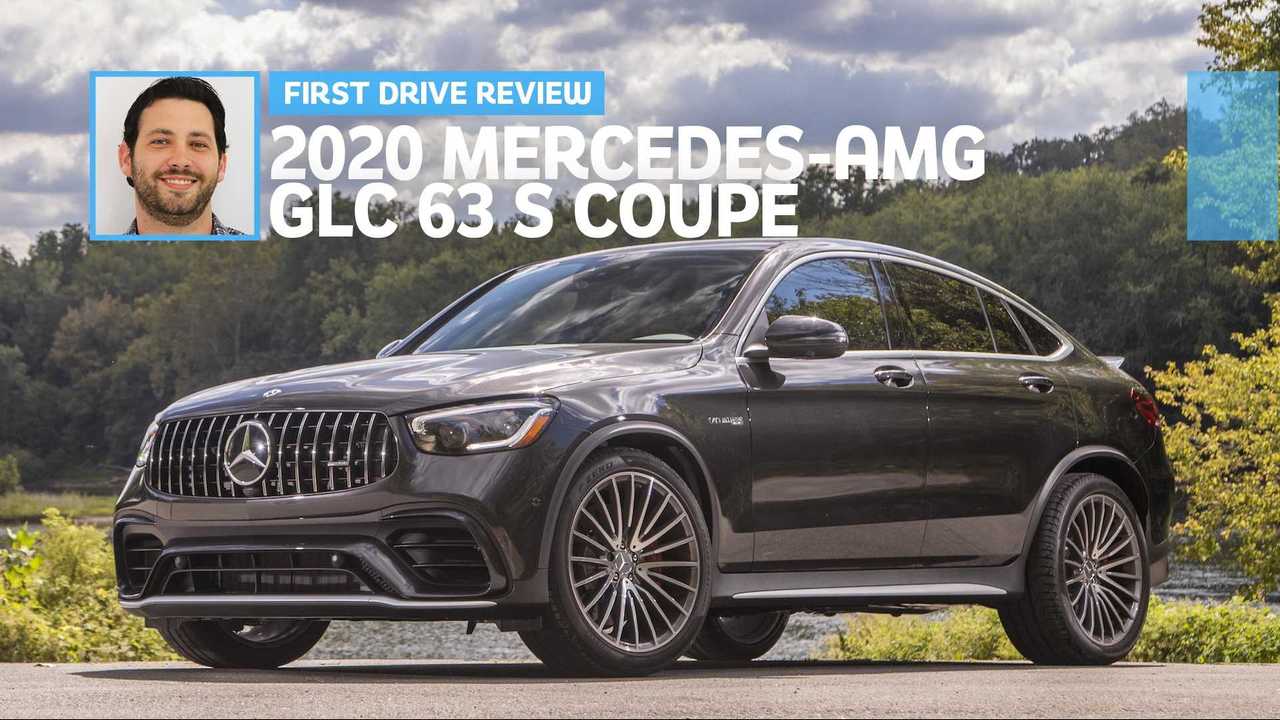 The worst part about the 2020 Mercedes-AMG GLC 63 S is that it’s exclusive to the Coupe. Want the practicality of the standard GLC body style with the 503-horsepower twin-turbocharged 4.0-liter V8 engine from the S model? Tough luck, because Mercedes-AMG limits the upright GLC 63 to the standard 469-hp engine. Of course, Mercedes also offers the Coupe sans S, but if you’re not prepared to go big, then you might as well go home.

AMG On The GLC:

The extra grunt of the S cuts the sprint to 60 miles per hour to 3.6 seconds from the base GLC 63’s 3.8-second run, while the top speed rises to an electronically limited 174 mph from the standard model’s figure of 155 mph. S or not, the GLC 63 is quick. Damn quick. In fact, the BMW X3 and X4 M Competition, Jaguar F-Pace SVR, Land Rover Range Rover Velar SV Autobiography Dynamic, and Porsche Macan Turbo all need more than four seconds to hit the mile-a-minute mark from a standstill, while the GLC 63 S ties the Alfa Romeo Stelvio Quadrifoglio for quickest in class.

Predictably, the GLC 63 S Coupe proves an absolute riot on the wet roads that snake through New York’s Dutchess County. Riding on a set of optional 21-inch wheels (20s are standard), the 4,548-pound crossover’s Pirelli P Zero summer rubber struggles to stick to the wet tarmac. Boot the accelerator pedal and the tires momentarily lose grip as the all-wheel-drive system seamlessly shifts power between the front and rear axles (it sends up to 100 percent of the engine’s grunt rearward or 50 percent forward). Enter turns with a bit too much fervor and understeer sets in. It’s all good fun, though, and if anything goes amiss, the big 15.4-inch front and 14.2-inch rear brake discs work with a firm pedal to bring the 4,548-pound crossover to a drama-free halt.

Likewise, the nine-speed automatic transmission amuses with its quick shifts and the accompanying staccato blats that emit from the active exhaust system’s pipes. Even in Comfort mode, the gearbox, which uses a wet clutch in place of a torque converter, behaves prophetically; it ably holds gears through turns and swiftly kicks down a few cogs following a prod of the right pedal.

Predictably, the GLC 63 S Coupe proves an absolute riot on the wet roads that snake through New York’s Dutchess County.

Switch to Sport, Sport Plus, or – the S-exclusive – Race driving modes (there’s also a Slippery mode, as well as a configurable Individual setting), and the powertrain’s responsiveness improves, the heavy but direct variable-ratio steering gets even weightier, and the air suspension’s already rigid ride gets even firmer. Swapping drive modes also adjusts the distribution of torque between the front and rear wheels, the thresholds of the stability control system, and the parameters of the electronically controlled locking-rear differential.

Frankly, the configurability of the AMG GLC is a bit overwhelming, although the addition of a drive mode dial to the leather and faux-suede steering wheel of the S model at least makes it easier to alter the crossover’s dynamic settings on the fly. The feature is an option on the lesser GLC 63 and also shares space on the thick-rimmed wheel with a pair of chunky paddle shifters, as well as the likes of the infotainment and cruise controls.

Like the GLC 300, the GLC 63 welcomes the Mercedes-Benz User Experience (MBUX) infotainment system into its fold. The setup relies on a dashboard-mounted 10.3-inch touchscreen with an associated console-mounted touchpad, as well as a finicky set of touch-sensitive steering wheel controls that also interact with the 12.3-inch digital gauge cluster.

More enterprising users can navigate the system via the voice recognition system, which activates with the push of a steering wheel button or by saying the phrase, “Hey Mercedes.” The latter function, however, falls prey to false queries and often responds to the mere mention of the word “Mercedes.”

Like the GLC 300, the GLC 63 welcomes the Mercedes-Benz User Experience (MBUX) infotainment system into its fold.

Yet, the oversensitivity of MBUX’s voice recognition function is no more maddening than the raucous thrum from the available 21-inch Pirelli tires or the uncomfortably tall lift-over height and small cargo hold of the Coupe. With a maximum of 49.4 cubic feet of space, the Coupe’s hatch is down 7.1 cubes to the upright GLC 63.

What the GLC 63 Coupe lacks in cargo room, it makes up for with its tastefully tapered roofline and model-specific S trim. Thanks to an exterior refresh that includes new headlights, a larger grille, and revised taillights, the 2020 Mercedes-AMG GLC 63 S Coupe’s looks toe the line between elegance and menace with more grace than ever before. If only the most powerful variant of AMG’s compact crossover offered a skosh more versatility, as well.