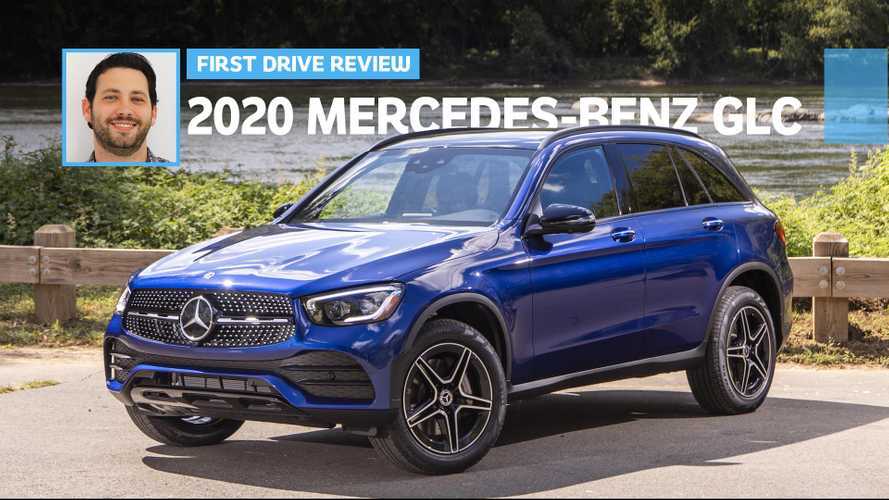 Call me an optimist, but rather than bemoan the 2020 Mercedes-Benz GLC 300 as just another crossover, I embrace the model for what it is: the closest thing we Yanks get to a C-Class wagon. Admittedly, the GLC 300 is more than 400 pounds heavier than both the C300 sedan Mercedes sells in the States and the two-box C300 it sells elsewhere, but the crossover’s extra heft hardly calls attention to itself as I drive north toward Cold Spring, New York from Jersey City, New Jersey.

A Look Back At The GLC:

Credit the GLC 300’s new-for-2020 turbocharged 2.0-liter four-cylinder engine for this feat. Introduced in the 2019 C300, the 255-horsepower engine produces 14 more ponies relative to the previous turbocharged 2.0-liter inline-four of last year’s GLC 300. Mercedes claims the GLC 300’s extra horses of the updated GLC 300 help it scoot to 60 miles per hour in 6.1 seconds, or up to 0.3 second quicker than the prior model.

With minimal turbo lag and a healthy 273 pound-feet of torque available at 1,800 revs, the forced-induction four ably pushes the GLC 300 off the line and past the slower moving traffic that dots Jersey City. Hammer the right pedal, and the engine eagerly spins to its 6,500 rpm redline, all the while emitting a pleasing – for a four-cylinder – legato grunt.

If only the GLC 300’s nine-speed automatic transmission were as agreeable as its engine. Although it swaps cogs unobtrusively, the gearbox is slow to downshift in the crossover’s default Comfort setting. Toggling to the more aggressive Sport or Sport Plus drive modes improves the transmission’s responses, but both settings also make it prone to holding gears longer than necessary for typical daily driving (there’s also an Eco mode, as well as a configurable Individual mode). At least there are a pair of steering-wheel-mounted shift paddles that afford manual control of the gearbox.

If only the GLC 300’s nine-speed automatic transmission were as agreeable as its engine.

While Mercedes’s 4Matic all-wheel-drive system is available as a $2,000 extra, the GLC 300 I drive does without the feature. Instead, the powertrain sends all of its oomph to the rear wheels. With 88 pounds less weight to carry around on its front end, the rear-drive GLC 300 proves particularly lively on twisting tarmac. Thanks to its light but direct steering, rigid underpinnings, and stiff springs, the 3,889-pound compact crossover is far more entertaining to push around than its mass might suggest. Of course, it doesn’t hurt that this GLC includes $1,250 worth of 20-inch wheels wrapped in summer tires. With gobs of lateral grip from the sticky rubber, limited body roll, and a firm brake pedal, the GLC feels almost as confidence-inspiring on asphalt as its lighter and lower C300 stablemate.

The GLC’s nimble nature comes at the cost of ride quality, though, and the crossover’s multi-link front and rear suspensions’ stiff tuning leaves heads tossing and cargo turning while going over small road irregularities. That said, it’s likely the GLC’s standard 18-inch wheels and all-season tires make for a less rigid ride.

Regardless, the GLC’s new looks add handsome glitz to a generally restrained design. Those searching to turn heads may want to consider the more ostentatious GLC 300 Coupe, which trades the standard model’s tall, wagon-like body for a roofline that plunges aft of the B-pillar. Available exclusively with all-wheel-drive, the Coupe’s $50,000 starting price is $7,500 greater than that of the standard GLC.

Regardless, the GLC’s new looks add handsome glitz to a generally restrained design.

Predictably, the run-of-the-mill GLC’s more upright roofline makes it the better choice for rear-seat passenger comfort and cargo carrying. The former is up 1.3 inches to the Coupe’s 38.3 inches, while the latter betters the Coupe’s 17.7 cubic feet with all seats in place and 49.4 with the three-across rear bench’s 40/20/40-split seatback folded by 1.7 and 7.1 cubes, respectively. Furthermore, the standard GLC’s cargo bay tops the not-for-America C300 wagon’s by as much as 4.2 cubic feet.

Fore of the B-pillar, though, the insides of the GLC and GLC Coupe largely mirror one another, and both models benefit from the addition of a standard 10.3-inch dash-mounted touchscreen in place of the prior models’ standard 7.0-inch unit, a newly available 12.3-inch digital gauge cluster, a redesigned steering wheel with touch-sensitive controls, and Mercedes’s latest infotainment system, MBUX.

An acronym for Mercedes-Benz User Experience, MBUX replaces the prior COMAND infotainment system. Along with the aforementioned touchscreen and steering wheel controls, MBUX also enables user interaction by way of a center console-mounted touchpad and voice control, which comes online by tapping a steering-wheel-mounted button or by saying the phrase “Hey Mercedes.”

The latter function is better in theory than in practice, and I routinely catch MBUX’s attention by simply saying the word “Mercedes.” The oversensitivity of the system is a tiresome trait and I soon find myself searching for synonyms for “Mercedes” (“company,” ”brand,” “automaker,” etc.) in order to ensure MBUX doesn’t – wrongly – assume I’m in need of its assistance.

"Hey Mercedes" is better in theory than in practice.

Not all of the GLCs new technology is a lost cause, though. For example, the available augmented navigation system uses the dash-mounted touchscreen to display navigation information on a live feed from a forward-facing camera located behind the rearview mirror. It’s a kitschy bit of tech that’s visually impressive, if ultimately no more or less useful than the graphical directional displays that typically pop up on navigation screens.

More striking are the changes made to the crossover’s driver-assistance systems. Notably, Mercedes’s Distronic adaptive cruise control uses navigation and traffic data to adjust vehicle speed in response to route features such as bends, junctions, and upcoming traffic. Additionally, Distronic now works with the crossover’s lane-centering system to assist with lane-change maneuvers on multi-lane roads once the vehicle’s speed equals or exceeds 50 mph and the driver activates the turn signal. Alas, I fail to test the function on the roads that lead to my destination.

Despite the additional bulk it carries compared to the Mercedes-Benz C300 wagon, the 2020 GLC 300’s larger cargo bay and formidable dynamics arguably make this crossover SUV as good as, if not better than, Mercedes’s compact wagon. No wonder crossovers and SUVs are displacing wagons at the three-pointed star’s U.S. dealerships.