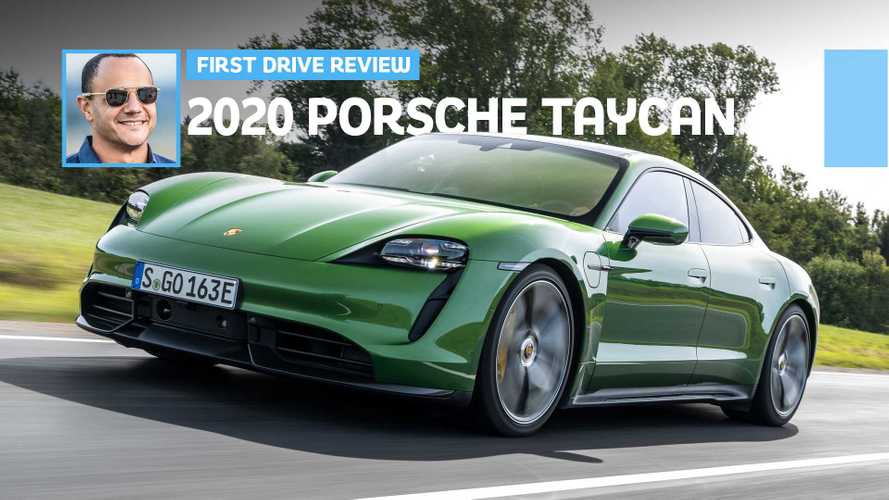 There is no pause as pregnant as the quiet before this storm. After twisting the mode dial into Sport Plus mode and standing on both pedals, the 2020 Porsche Taycan Turbo S displays a “Launch Control activated” message while seemingly nothing else happens – no wailing engine, no waiting for boost (despite the nomenclature), just the tentative hum of an electronically generated soundtrack as 774 pound-feet of torque are about to discharge through all four wheels.

Taycan It To The Limit:

Lift the brake pedal, and an ungodly wallop slams your cranium against the headrest as instant torque hurtles the 2.5-ton sedan ahead. Porsche claims 60 miles per hour arrives in 2.6 seconds for the Turbo S (or three seconds flat in the lesser Turbo model), but my seat of the pants isn’t buying it. As a top speed autobahn run later reveals, the boys in Zuffenhausen have a way of chronically understating their vehicles’ capabilities.

Following a protracted publicity push that included tech workshops, a ceremonial factory opening, taxi rides, a splashy introduction at Niagara Falls, and a nine-country media drive from Oslo to Stuttgart, the new Taycan has sent a series of shockwaves through enthusiast culture and sparked debates unlike any Porsche release in recent memory. It could be argued that, planned or unplanned, the first modern-era electrified car to hail from Zuffenhausen arrives at a near ideal moment in history.

Elon Musk’s EV efforts were remarkably pioneering, but the big picture timeline might have ultimately worked to Porsche’s advantage: The Tesla Model S, now seven years old and showing its age, has had ample time to convert skeptics from fuel-dependent creatures of habit to battery-believing evangelists. Tesla’s Supercharger network has linked North America (not to mention much of Europe and other parts of the world), bolstering confidence in long distance electron-fueled road trips. Dropping a Porsche badge on a hastily developed product could have theoretically stolen some sales from Tesla, but the damage to the carmaker’s driver-focused reputation would have been irreparable. The only way for Porsche to do the Taycan was to take their time and get it right.

Green, In More Ways Than One

I’m staring at a production-spec Mamba Green Metallic Porsche Taycan Turbo S as I prepare to drive from Copenhagen, Denmark to Hamburg, Germany over the course of two days. It’s damn striking in person, and doesn’t look far off from the Mission E concept car the brand dropped at the 2015 Frankfurt Motor Show.

Low and curvaceous, yet also relatable to the more visually approachable Panamera, the Taycan strikes a powerful counterblow to the workaday hatchbacks and crossovers surrounding it on public roads. It also happens to boast a drag coefficient as low as 0.22, making it the slipperiest car Porsche builds.

Even more significant than the new Porsche’s looks are its underpinnings; particularly the 800-volt architecture that drives the powertrain. Because greater voltage means being able to run at lower amperage, the system is less susceptible to thermal breakdown. This might explain why Tesla was reportedly able to run a 20-second-quicker lap time at the Nürburgring Nordschleife compared to the Porsche, but was later spotted being loaded onto a flatbed mid-lap while a Taycan coasted on. The 800-volt setup also enables quicker DC fast charging, enabling a staggering top off from 5 percent to 80 percent in as little as 22.5 minutes.

The Taycan is damn striking in person.

Climbing inside the Taycan reveals a slick, expensively appointed space that, at first glance, seems to have combined Porsche and Audi’s latest glass panel display interfaces with a touch of the futuristic themes showcased in the Mission E concept. No fewer than four screens lurk inside: a customizable instrument panel straight ahead of the driver (flanked by touch-sensitive controls), a central 10.9-inch touchscreen for multimedia functions, another one alongside it ahead of the passenger (the optional piece enables fun stuff like simultaneous GPS views that can end, once and for all, the eternal debate of direction-of-travel vs north-facing displays), and a centrally situated screen for climate controls. In practice, the screens function relatively well, though a few annoyances emerged on our road trip. More on that later, though.

Press the first power button ever fitted to a Porsche (yes, it’s left of the steering wheel for those Le Mans-style starts, duh), and a low-frequency thrum emerges. Switching to Sport Plus makes the sound more prominent inside, sending a phaser-like hum through the cabin during acceleration. While the exterior pedestrian warning sound is undeniably cool from the outside, the effect inside is thankfully defeatable within the Individual setting. (Like many party tricks, this one is initially cool but eventually overstays its welcome.)

The first thing that strikes you from behind the wheel is the naturalness of the controls. From the intuitive feedback transmitted through the steering wheel to the reassuring pressure of the brake pedal as it provokes deceleration, there’s a surprisingly analog feel to this definitively digital car.

Powered by a 93.4-kilowatt-hour battery that motivates two synchronous electric motors (one up front, the other driving a two-speed multi-plate clutch gearbox at the rear), the Taycan accelerates with an effortless forward motion that is easily and accurately modulated with the right pedal. There are four drive modes – Normal, Sport, Sport Plus, and Range (which maximizes efficiency) – and first-gear starts are reserved for the two most aggressive settings. Under typical acceleration in Sport and Sport Plus, the shift from first to second occurs at around 50 mph.

As such, the resulting power delivery produces remarkable flexibility, pulling all the way to 16,000 rpm (though there’s no display of motor speed, just power meters revealing relative output and regeneration). Lay into the accelerator and the resulting thrust is unreasonable, extreme, and downright addictive, especially in the juiced-up Turbo S, with its additional output in overboost.

The Taycan lurches ahead and closes gaps with remarkable (yet nearly silent) ease, with an extra dose of immediacy when starting from a rolling stop. Switch the sound effect off, and it’s easy to underestimate the G forces at play. Apart from the perceptible nudge of the one-two shift, acceleration is virtually seamless, particularly when Range and Normal modes are selected, which both cut back on first-gear starts.

The brake response is organic, which is particularly remarkable because Porsche claims that 90 percent of braking forces during most driving comes from energy recuperation, not the friction created by the hydraulically actuated, carbon-ceramic stoppers.

Though the units will inspire confidence from those who prefer dramatic threshold braking over slow, steady pressure application, some might be disappointed to find out that the energy recuperation button on the steering wheel does not create enough off-throttle drag to enable one-pedal driving. While Porsche’s press materials explain that the light regeneration (and ability to coast, if desired) reduces “head toss,” we would have liked to at least see the option for heavy regeneration.

The acceleration is unreasonable, extreme, and downright addictive.

That’s not to say there isn’t plenty of delight to be had behind the wheel; quite the opposite, in fact. The Taycan’s driving dynamics are deliciously satisfying, from the massive amounts of power on tap to the sharp turn-in, aided by rear-axle steering and considerable grip from the surprisingly beefy tires (245/45 front and 285/40 rear 20 inchers on the Turbo, and 265/35 front and 305/30 21s on the Turbo S).

Though the totality of the air suspension’s damping capabilities aren’t quite as versatile as the Panamera’s (due to the reduced height of the shocks and the Taycan’s increased mass), those sacrifices don't become readily apparent unless you’re hustling over significant elevation changes at considerable speed, which accentuate the car’s perceived heft.

Speaking of elevated velocities, stretching the Taycan’s legs over an open stretch of unrestricted autobahn reveals a strong climb to around 150 mph, followed by a tapering off until the car reaches an indicated 269 kilometers per hour (or 167 mph), which matched up to data from a GPS phone app. Given the manufacturer’s claimed top speed of 162 mph, the small dollop of extra speed is a welcome bonus.

While the driving dynamics were stellar, a few ergonomic annoyances like the lack of hard buttons meant having to delve through an air conditioning menu to change simple things like the direction and flow of the vents. Other quirks include the inability to display certain functions like state of battery charge on the lower central display unless the car is static, and a passenger side display that disabled itself unless a passenger was physically sitting in the front seat. We also experienced some navigation system glitches on one of our test cars, which we figure (and hope) will be solved by the time cars reach showrooms this December.

Minor quibbles aside, our two-day experience behind the wheel of the Porsche Taycan Turbo and Turbo S revealed a remarkable amount of refinement and quality of execution from a dynamics standpoint to an overall level of comfort, quiet, and ability to gobble up mile after mile with minimal driver fatigue. The rear seats even offer enough space to comfortably seat two six-foot-tall adults for long periods of time. Though saddled with hefty sticker prices, the Porsche Taycan Turbo and Turbo S deliver an exceptional answer to a question enthusiasts never knew they had, and enough innovation to inspire yet another wave of high-performance EV sedan contenders.