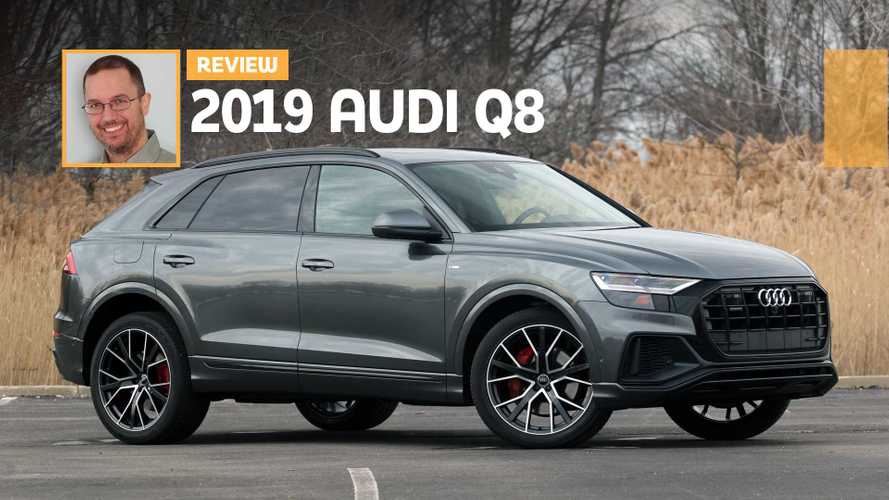 Audi is fielding a superlative competitor in the growing segment of large crossover coupes.

The term ‘four-door crossover coupe’ does not roll off the tongue, but it’s an accurate description of the 2019 Audi Q8. This all-new vehicle does indeed have four doors, can be classified as a crossover, and is a coupe in so much as its profile isn’t that of a traditional SUV. What separates the Q8 from its main competition, though, is that it’s not merely a normal crossover SUV with its rear roof erased. Rather, it’s a clean sheet design.

Q8 And The Competition:

And oh what a design it is. The Q8 is a head-turner, and perhaps Audi’s most beautiful design since the R8. That may sound controversial, but Audi’s sedans and SUVs have been stuck in an evolutionary cycle that’s drained the drama from its shapes. The Q8, though, is as dramatic as a Grey’s Anatomy finale.

It also manages to remain comfortable and capable despite the cargo-compromising roofline. There’s very little not to like about the Q8 besides its price and fuel economy. And if you can afford the former, you won’t mind the latter all that much.

Audi designs can sometimes be too conservative, especially its sedans and SUVs. The Q8, though, is a head-turner, and I mean that literally; many rubbernecks craned to see the Q8 as I drove by in it. I’m not sure why, though. The Q8’s exterior features the same design elements that all Audis do: a giant grille, high-tech exterior lighting elements, and extra large, yet elegant, wheels are the highlights.

There’s a little something extra stirred into the Q8’s design, though. I’ve got it narrowed down to either the protruding fenders that give it a broad-shouldered stance or its defining element, a four-door coupe profile. Both make the Q8 more striking to behold than, say, the Q7. From some angles, the Q8 even looks like a Lamborghini Urus with a more conservative haircut – not surprising considering they share the same underpinnings.

Unlike the exterior, there’s no arguing the Q8’s interior is superlative. While not original to the Q8 (you can find nearly the same interior in the A6, A7, A8, and the E-Tron), it’s nevertheless a case study on how to properly marry the advantages of both physical and screen-based controls. The setup features two large screens embedded in the center stack, both of which feature the highest resolution and some of the crispest graphics currently available. The top one is 10.1 inches large and the bottom 8.6 inches. They artfully divide the infotainment system’s tasks and even feature haptic feedback with an audible click to register your inputs. Alongside those screens is Audi’s venerated Virtual Cockpit system, which is an even larger 12.3-inch screen behind the steering wheel that provides vital vehicle information like your speedo, tach, temps, and such.

This is a luxury SUV, so the material choices and fit and finish in the cabin are top notch. This particular Q8 features black leather seat upholstery with contrasting Rock Gray stitching and fine grain Ash wood inlays. It’s austere, but the real wood accents go a long way in lightening and softening the dark aesthetic.

The Q8 scores above average for comfort because, unlike some other four-door coupe crossovers, its rear seat has enough headroom to comfortably fit full-size adults.. The sloping roofline of this type of vehicle usually precludes that, but Audi manages to beat its main competition, the BMW X6, by nearly an inch in rear seat headroom. The Q8 also spanks the X6 in cargo volume, with a maximum 60.8 cubic feet available with the rear seats folded forward.

Front seat passengers are also very well taken care of in the Q8. Stepping up from the base Premium to our tester’s Premium Prestige trim level gets you heated and cooled 12-way power seats that include four-way power lumbar adjustment for both the driver and front passenger. These seats are the best in the house, and are both comfortable and supportive.

When you’re underway, the Q8 does sacrifice some comfort because of its giant 22-inch wheels. Gorgeous as they might be, these alloys sacrifice ride comfort with their thinner side walls. Even with Audi’s adaptive suspension on its most forgiving setting, this wheel-and-tire combo lets more bumps through than a luxury sedan like the A8 would.

The Q8 may look aggressive with its big fenders, giant wheels, and maleficent-looking headlights, but this is not a sports car. It’s powered by a turbocharged 3.0-liter V6 producing 335 horsepower and 369 pound-feet of torque (rather than the lovely diesel offered in Europe). This engine is no means a slouch (it can tow a healthy 7,700 pounds), but it’s nevertheless taxed with a lot of weight and moving parts. Considering the Q8 weighs over 5,000 pounds, you shouldn’t be surprised it’s not a hot rod (yet).

Audi does offer multiple drive modes that individually tune things like the engine’s responsiveness, how fast shifts are executed, and the adaptive suspension’s firmness. Dynamic mode is (as usual) the sportiest setting, and it’s one of the few sport modes I could happily live with all day. It nicely quickens and tightens the Q8’s reflexes and demeanor, but not so much that it’s uncomfortable to use for extended periods. An Individual setting allows an even more tailored drive experience.

What hurts the Q8’s driving experience most is its eight-speed automatic transmission. At times it’s clunky, particularly when accelerating from a stop or shifting from reverse to drive. Once underway, the gearbox operates invisibly in the background, but its urgency never seems to match the Q8’s other heightened faculties in Dynamic mode.

The Q8’s tech and connectivity score reflects typical Audi excellence in this area. Many positive things have been said about the company’s Virtual Cockpit system, which replaces traditional analog gauges behind the steering wheel with a large digital display. Consider those accolades echoed here, but in the Q8, Virtual Cockpit plays second fiddle to Audi’s incredible dual-screen infotainment system.

This two-screen infotainment setup is the best in the business, and is a vast improvement on the setups from Infiniti and Acura, while beating out the newer setup from Jaguar Land Rover for sheer livability. The system itself is super speedy and the graphics are gorgeous. I thought I might miss having a rotary controller for inputs, but Audi makes the touchscreen interface better by giving users haptic feedback and an audible click when inputs are accepted. The dual-screen system also wows the socks off unsuspecting passengers – it makes quite the first impression.

What truly scores high with us, though, is the Q8’s collection of tech features that surprise and delight. Take its surround-view camera system and the virtual 360-degree view it provides. We’ve seen camera systems with a top-down, birds-eye view before, but Audi’s system lets you touch the screen and drag the camera around a 3D avatar of the Q8. I found this especially useful when parallel parking to see exactly how far away from the curb I was. Also, the Q8 features wireless charging for your smartphone, but Audi goes a couple steps further by including a “phone box” that uses the car’s antenna to boost your phone’s signal. Continuing the wireless theme, Apple CarPlay is also available sans cords.

The National Highway Traffic Safety Administration has crash tested the Q8 and it earned the organization’s highest rating of five stars. It’s also gone through the Insurance Institute for Highway Safety’s more difficult collection of crash tests and emerged with an impressive Top Safety Pick rating. The Q8 missed out on the institute’s highest rating of Top Safety Pick+ because its headlights didn’t perform well across all trim levels, though.

In terms of advanced driver-assist systems, the Q8 includes front and rear parking sensors and automatic emergency braking as standard equipment. Bumping up from Premium to Premium Prestige also gets you a blind-spot-monitor system with rear cross-traffic alert, a rear collision warning system, the aforementioned surround-view camera system, and automatic high-beam headlights. Optional Matrix LED-capable headlights are also available, but the dazzle-free software in these advanced lights won’t work until the government updates its motor vehicle safety standards.

One can also choose a Driver Assistance package for $2,750, which comes with adaptive cruise control that operates all the way down to a complete stop, lane departure warning with lane-keeping assist, and steering assist that helps avoid turning left in front of oncoming traffic. The latter system isn’t common in the industry, but it’s a welcome addition. In total, these systems work as advertised to keep the Q8 from getting into dangerous situations.

The Q8 is rated by the Environmental Protection Agency at 17 miles per gallon in the city, 22 on the highway, and 19 combined. While not considered fuel efficient by any means, the Q8 is at least on par with the BMW X6 xDrive35i and the 385-hp Mercedes GLE43 Coupe, which net 20 and 19 mpg combined, respectively. These vehicles also recommend premium fuel to run.

As far as large crossover coupes go, the Audi Q8 is reasonably priced. At the moment, only four vehicles occupy the segment: the Q8, the BMW X6, the Mercedes-Benz GLE-Class Coupe, and the upcoming Porsche Cayenne Coupe. The Audi’s base price of $67,400 lands in between the BMW at $63,550 and the GLE43 Coupe at $71,350, while the Cayenne Coupe at $75,300 is the priciest entry.

Audi offers the Q8 in three trim levels: Premium, Premium Plus, and Prestige. This tester is a mid-level Premium Plus, which comes with a higher starting price of $71,400 but includes more standard equipment. Options on this tester include a Driver Assistance package with full-speed adaptive cruise control and camera-based lane-keeping assist with steering assistance for $2,750, a special Year One package (so named for this being the Q8’s first model year) that comes with enormous 22-inch wheels and other visual enhancements for $2,250, a towing package for $650, a Cold Weather package for $600 (heated rear seats and a heated steering wheel), and a CD/DVD player for $100. With a $995 destination charge, its as-tested price is $79,340.

One might also compare the Q8’s price to its Audi stablemate, the Q7. The latter is a larger, three-row SUV that costs considerably less with a starting price of just $53,550 when powered by Audi’s turbocharged 2.0-liter four-cylinder engine and $59,500 when equipped with the same turbocharged 3.0-liter V6 as the Q8. Though smaller in size, the Q8 is more stylish and advanced than its big brother. The Q7 has a comparatively dated interior design, and its feature set is smaller and less impressive. You’re definitely getting what you pay for with the Q8.