The Cayenne Coupe won’t force you to settle for a sports car or SUV.

The roads of southern Austria are narrow. Often dotted by a cute Bavarian town or twisting through a mountainous pass on the border of Slovenia, these streets are barely big enough for two hatchbacks to pass safely. So when Porsche asked us to test its new Coupe in the town of Graz, we thought, "perfect; these tight, twisty byways would be ideal for wringing out some sleek two-door."

But "coupe" is a pretty loose term in today's market. And the vehicle in question – the 2020 Porsche Cayenne Coupe – is no coupe at all. It's essentially an additional body style to the standard Cayenne, but brings with more style, additional sporty elements, and dare we say, 911-like characteristics. 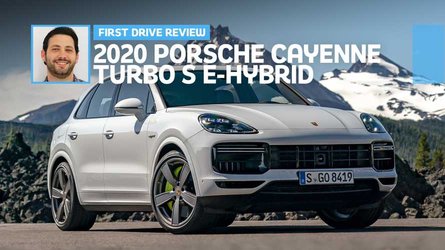 Where the BMW X6 and Mercedes-Benz GLC Coupe ok too cartoonish, the Cayenne Coupe is striking. It's a restrained alternative to its brutish Bavarian siblings and borrows most of its cues from the already handsome standard Cayenne. Squint hard enough and you'll notice the updates to the front fascia, particularly on the lower portion of the bumper.

But even with the similarities, around 30 percent of the Cayenne Coupe's components are brand new. The hood, front fenders, front door skins, and lights are the only carryovers from the standard model. The Coupe is 1.2 inches longer and 0.7 inches wider than the standard Cayenne, and it's generously styled rear haunch is reminiscent of the Macan and Panamera. There's an abundance of "shelving," or angles in the sheet metal that extend out in order to accentuate the vehicle's curvature. But even with serious sloping and a drop in cabin space, the design changes don't make the cabin feel cramped.

Porsche lowered the rear seats by more than an inch, yielding a healthy amount of headroom for your six-foot-tall author. The backseat feels especially airy with the standard panoramic glass roof, and even more comfortable with the optional Houndstooth two-tone cloth and leather seats, and sport buckets over of the standard rear bench (as part of the Lightweight Sport package, and $11,570 option). Up front, the same highly configurable 12.3-inch central touchscreen and dual 7.0-inch instrument cluster displays carry over as part of the latest Porsche Communication Management (PCM) system.

On the outside, the Lightweight Sport package adds lightweight 22-inch "GT" alloy wheels (which shed 4.4 pounds over to the standard setup), a carbon-fiber roof replaces the standard glass one, and three – that's right, three – spoilers are located out back depending on how you spec it. A pronounced two-piece wing sits atop the upper portion of the bodywork with the Lightweight Sport package, as does a second, more subtle carbon-fiber lip spoiler just above the badging. And at 56 miles per hour, an electronically actuated third spoiler extends out five inches from under the rear windshield, as if to say, "look at me I'm a sports car." For all of its subtleties elsewhere, we love the Cayenne Coupe's triple spoiler treatment and its ridiculous rear end.

But those additional wings and extra carbon-fiber pieces serve a purpose outside of design. The Cayenne Coupe with the Lightweight Sport package (as the name suggests) loses up to 48 pounds with things like carbon-fiber roof option ticked. And that weight loss pays off on the road.

The Cayenne Turbo Coupe is easily the most entertaining of the three trims.

We hit the tight, twisty roads of southern Austria in all three variants of the Cayenne Coupe: the base model, the mid-range S trim, and the high-po Turbo. Each one with their own unique set of characteristics, but all are essentially carryovers from the standard Cayenne model line.

With a turbocharged 3.0-liter V6 producing 335 horsepower and 332 pound-feet of torque, the base Cayenne Coupe is the baby of the bunch. But it's far from underpowered, taking a manufacturer-estimated 5.7 seconds to hit 60 miles per hour. Push it in Sport and Sport Plus modes, and the Cayenne Coupe feels capable and confident. A responsive steering rack and firm suspension allow us to fling it around pretty quickly. Mash the gas pedal – power routes through an eight-speed automatic transmission – and the only downside is that the base model feels just a pinch underpowered against its hotter siblings.

The S model is the stand-out of the group thanks to its impressive blend of power and agility. The twin-turbocharged 2.9-liter V6, producing 434 horsepower and 406 pound-feet of torque, yields a big uptick in power over the base Cayenne Coupe, and an upgraded 60 mph time of 4.7 seconds. Pop it into Sport or Sport Plus, and the S transitions from capable-for-a-crossover to sports-car-like. Its steering is heavier and more responsive, the suspension stiffens up, and the engine now responds more aggressively to throttle inputs.

We could do without the optional Porsche surface coated brakes, though, which reduce dust by 90 percent, but don't modulate well at lower speeds, and feel too grabby at high speeds. For $3,490, they aren't worth the upgrade over the standard steel brakes.

But if buyers truly want to get wild, the Turbo trim provides all that's previously mentioned and then some. The Cayenne Turbo Coupe is easily the most entertaining of the three trims. Even at more than 5,000 pounds, the 541-hp Cayenne is an incredibly capable option on these twisty mountain roads, driving more like a bloated 911 than a crossover (and we mean that in a good way).

The twin-turbocharged V8 yields a sports car-esque 60 mph sprint of 3.7 seconds and a top track speed of 177 mph. Like the base model and S trim, the Turbo comes with the same eight-speed automatic gearbox. Why no PDK? Because towing. The trio can move up to 7,700 pounds when properly equipped and the PDK would simply be too sensitive. But its tugging abilities come second only to its strength in corners.

The Cayenne Turbo Coupe's rigid suspension and well weighted, speed-sensitive power steering yield insanely good cornering abilities. Toss it into a turn and it feels stable and able to carry plenty of speed. Thank the standard Cayenne's suspension components, which carry over here, including dynamic chassis control and rear-axle steering as part of the Performance package ($4,900), and torque vectoring plus ($1,500). Also, credit the carbon ceramic brakes (a $9,080 option) for their impressive and consistent stopping abilities.

But even with a modest $10,000 increase over the standard Cayenne, the Cayenne Coupe could entice buyers with its sleek styling and performance chops.

The Cayenne Turbo Coupe is an exercise in excess – more so than its relatively reasonable siblings, at least. It's a bit overly aggressive in Normal mode, and with a laundry list of options, it’s far more expensive than both the entry-level Cayenne Coupe and the S model. The base Cayenne Coupe Turbo starts at $130,100. Our tester, with the Lightweight Sport package, Performance package, and a handful of safety and interior options, costs $173,000.

Even the base Cayenne Coupe isn't our definition of "affordable." At $75,300 to start, the Coupe is a steep increase over the standard Cayenne, which starts at $65,700. The S model is even pricier, and starts at $88,600. And like any good Porsche, the options list is extensive. Individual add-ons like soft-close doors are $780, LED headlights with black accents are $850, and safety tech like lane-keep assist ($950) and adaptive cruise control ($2,000) hike the price even further.

But even with a modest $10,000 increase over the standard Cayenne, the Cayenne Coupe could entice buyers with its sleek styling and performance chops. It looks great and is far less outlandish than its competitors. It performs well, too, if not better than the standard crossover on which it's based. And with minor tweaks, like a wider rear track and generously styled rear, and options like Houndstooth seats and a carbon-fiber roof, there's enough reason for you to finally get that Coupe you've always wanted.