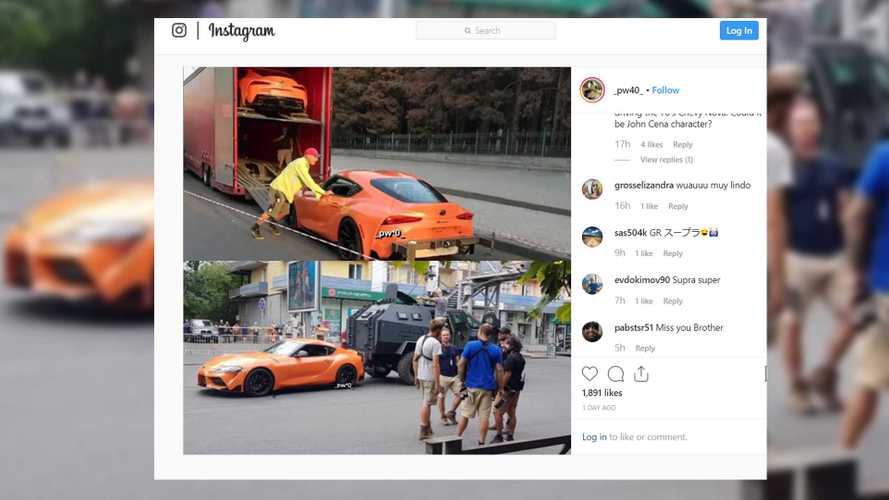 Could this signal the return of Brian O'Conner?

It seems Instagram user _pw40_ is in the right place at the right time. The place is Tbilisi, the capital city of Georgia, and the time is apparently right now. We don’t know much about the ninth installment of the Fast and Furious franchise, but thanks to _pw40_ we do know this: At least some of the action takes places in eastern Europe, and the 2020 Toyota Supra makes an on-screen appearance. Not only that, it looks like it’s wearing the same Day-Glo shade of orange as Brian O'Conner's MkIV Supra from the very first movie. Be still our nostalgic hearts.

In addition to photos, we’re also treated to a few videos showing action shots being filmed. To nobody’s surprise we see a black Dodge Charger in the mix, along with what looks like a classic Chevrolet Nova. A badass SUV is pulling the Supra, while two people looking a lot like Vin Diesel and John Cena (or more likely, their stunt doubles) are duking it out on top of a truck. You know, typical Fast and Furious stuff.

At this point, we know nothing about the plot, but we’re going to make a bold prediction that it involves the Fast and Furious crew facing off against some big baddie while driving modified cars. We do know the core Fast family is back, including Michelle Rodriguez who at one point said she might not return over concerns about females not getting stronger roles. Charlize Theron also returns as Cipher, though it’s unclear if the Fate of the Furious villain will still actually be a villain. Speaking of bad-guys-turned-good, Dwayne Johnson won’t be in the film – his Fast spinoff Hobbs & Shaw is currently in theaters, and there’s also been something of a public feud between him and franchise staple Vin Diesel. Whether he appears in future films is still unknown.

So Many Movies, So Many Cars:

All Fast And Furious Cars Ranked From Worst To First

Also returning is Jordana Brewster, who didn’t appear in The Fate of the Furious following the death of Paul Walker. It’s unclear if Walker’s character Brian O’Conner will have some kind of role in the new film, but we can’t help wondering if there’s a connection between that and the appearance of a shiny orange Toyota Supra. Of course, Brewster’s character Mia could be the pilot of the car while hubby Brian keeps the minivan running at home.

The next Fast and Furious romp will hit theaters in 2020.