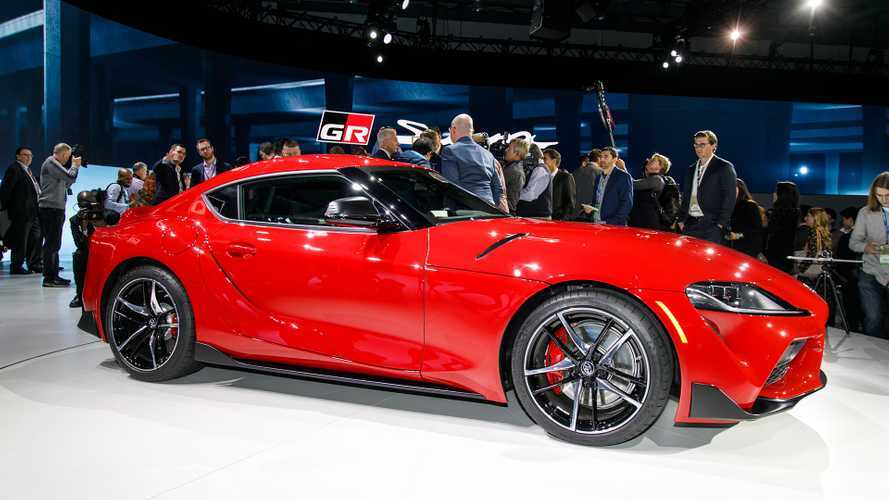 The wait is over.

Update: Live photos of the Supra from the Detroit Auto Show are now in the gallery below.

Following a not-so-brief 17-year hiatus and more than a decade of teasing – the Toyota Supra is back. Finally. Toyota pulled the cover off its new 2020 Supra at the Detroit Auto Show, and at first glance, at least, it appears to be well worth the wait.

We know what you're thinking: The 2020 Supra doesn't look anything like the iconic Mk4. The stunning Calty-designed FT-1 concept from 2016 is its main source of inspiration, as Toyota notes. And the concept styling translates exceptionally well to the production model.

The Supra Is Back:

The Supra's headlights, carbon fiber splitter, and double-bubble roof carry over almost unchanged from the FT-1. The only thing the Supra loses is the FT-1's elongated nose piece – it gets an extra grille slat directly underneath the Toyota emblem instead. Same goes for the rear, the slim taillights, ducktail spoiler, and low-mounted LED brake light element are all ripped from the FT-1, but look beautiful here.

The cabin is a bit different. Since the Supra shares its platform with the new BMW Z4, the similarities are glaring, particularly the iDrive dial in the center console and the iPad-style infotainment screen. There is a nice digital instrument cluster, though, which probably displays things like G-forces, lap times, and more. The only noticeable nod to the Mk4 is the driver-centric layout; the door panel and center console wrap around the pilot subtly.

The Supra's wheelbase stretches out to a tidy 97.2-inches. That puts it relatively in the same class as cars like the Porsche 911 (96.6 inches) and Jaguar F-Type (103.2 inches). But its 172.5-inch length makes it a little more compact overall – that means shorter front and rear overhangs, an extremely low center of gravity, and a perfect 50:50 weight distribution.

Toyota, together with Gazoo Racing, developed the Supra's chassis components from the ground up. Out back you'll find a typical multi-link rear setup, but up front, there's a unique double-joint spring strut suspension. All versions of the Supra come standard with an adaptive variable suspension available in two settings: Normal and Sport. The brakes come from Brembo, and feature 13.7-inch rotors with four-piston calipers at all four corners.

The new Supra comes powered by a turbocharged 3.0-liter inline-six courtesy of BMW – that's the same engine you'll find in the new Z4, though it's actually down on power here. That Supra produces 335 horsepower and 365 pound-feet of torque (versus the Z4's 382 hp and 369 lb-ft), and comes paired to an eight-speed automatic transmission exclusively. Toyota estimates this new Supra will sprint to 60 miles per hour in just 4.1 seconds but top speed is electronically limited to just 155 miles per hour.

The 2020 Toyota Supra goes on sale later this summer. At launch, it will come in three different trim levels: 3.0, 3.0 Premium, and Launch Edition based on the 3.0 Premium. The Launch Edition model comes in three different colors – Absolute Zero White, Nocturnal Black, and Renaissance Red 2.0 – with unique red interior accents. But it's limited to just 1,500 examples worldwide.