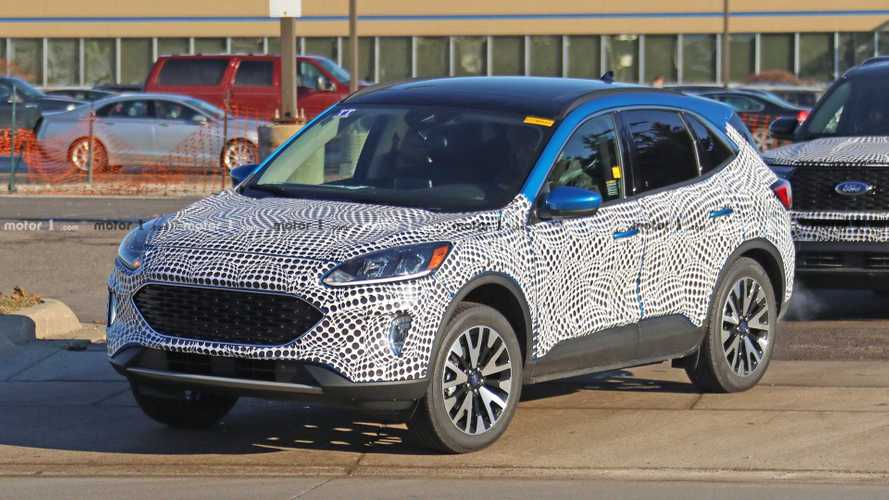 There are big changes at the front and rear for the updated Escape.

In this fresh batch of refreshed Ford Escape spy shots, the Blue Oval's engineers strip off a little camouflage to provide a better look at the upcoming update for the popular crossover. Look for a full debut in the second half of 2019 for the 2020 model year.

This Escape wears a mesh grille that replaces the existing crossbars in the front end. The headlights have a sharper shape, too. Vertically oriented driving lights are now in the fascia to replace the existing, more square-shaped lamps. In profile, the beltline gains a more gradual curve to the C-pillar.

At the back, there are completely different taillights that have a more extended shape than the current ones. The camouflage makes the tailgate design hard to see, but it appears to have less sculpted, flatter styling than on the existing crossover.

Look for the Escape to use a 1.5-liter turbocharged three-cylinder as its base engine. Higher level trims would get a power boost from the 2.0-liter turbo four-cylinder. Both of them would use a nine-speed automatic gearbox. Spy shots also show a plug-in hybrid version under development to offer buyers a more efficient choice.

We don't yet have spy photos of the refreshed Escape's interior. Expect Ford to match the exterior improvements with updated infotainment tech and more advanced driver assistance functions. Revised materials, trim, and switchgear might give the cabin a new look, too.

A handful of these photos also catch a glimpse of the upcoming Ford Explorer ST driving behind the Escape. The performance-oriented badge is clearly visible, and earlier spy shots provide a good look at the rest of the sporty revisions.