2018 Suzuki Jimny Fully Leaked Inside And Out 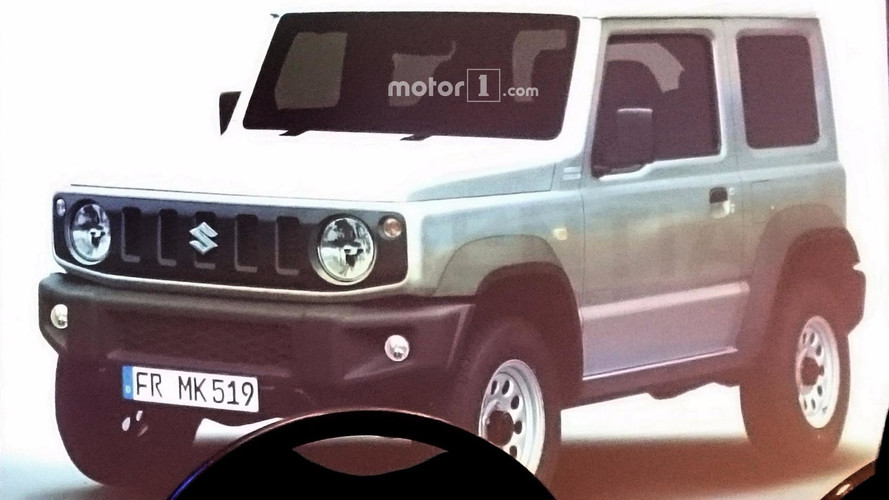 Plus, new spy shots of a prototype disguised as a mini G-Class.

In March 2016, we showed you the first official images of the latest Suzuki Swift courtesy of a few shots taken during a dealer presentation, long before the supermini’s actual debut in the metal. Today we are getting a feeling of déjà vu as the new Jimny is making headlines in the very same way – through official slides presented during what must have been a Suzuki presentation.

“Finally” is what some people are going to say considering the third generation has been around since 1998. The design appears to be a case of “if it ain’t broke, don’t fix it” since Suzuki’s team in charge of styling has played it safe by taking the evolutionary route. Don’t get as wrong, that’s actually a good thing since the new-for-2018 Jimny looks downright adorable like all the other models before it.

The white one depicted above is likely an entry-level version judging by the steel wheels, while the slideshow showing a quartet of Jimnys reveals how upper-spec trim levels with two-tone exteriors are going to look like. No word about the off-roader’s size, but from what we can see, Suzuki hasn’t visibly altered the proportions as it will continue to be quite small.

We also have some rather funny spy shots of a prototype undergoing testing on public roads while disguised to look like a downsized Mercedes G-Class. The attached pictures remind us of an old Jimny transformed into a G63 6x6 clone we talked about earlier in the year.

Getting back to the slider images, one of them allows us to take a good look inside. The right-hand-drive example has a significantly changed cabin compared to the outgoing model, with the infotainment’s screen positioned up high on the center console. Below sits a pair of square air vents featuring a different design than those on the sides, which frankly look like they’ve been carried over from the outgoing generation.

The Jimny illustrated in the official image was fitted with an automatic transmission and had a steering wheel quite similar to that of the Swift. Speaking of which, the supermini’s three rotary dials on the center stack will likely make the transition towards the next Jimny, but with a few changes.

Very few technical details are known at the moment of writing, but the next-gen model is rumored to employ Suzuki’s Allgrip Pro 4x4 system for true off-roading capabilities enhanced by low-range gearing. It will not ride on the same platform as the Ignis and Baleno since it’s expected to retain the ladder frame construction. As for power, the turbocharged 1.0-liter BoosterJet three-cylinder unit could be in the offing, along with a smaller turbo 0.66-liter and a naturally aspirated 1.2-liter mill.

When will we see it? Considering today’s substantial leak, Suzuki might want to host the world premiere late October at the Tokyo Motor Show, with a market launch set for early 2018. It won’t be in Frankfurt next month as the new Swift Sport will be the company’s main star at the event.