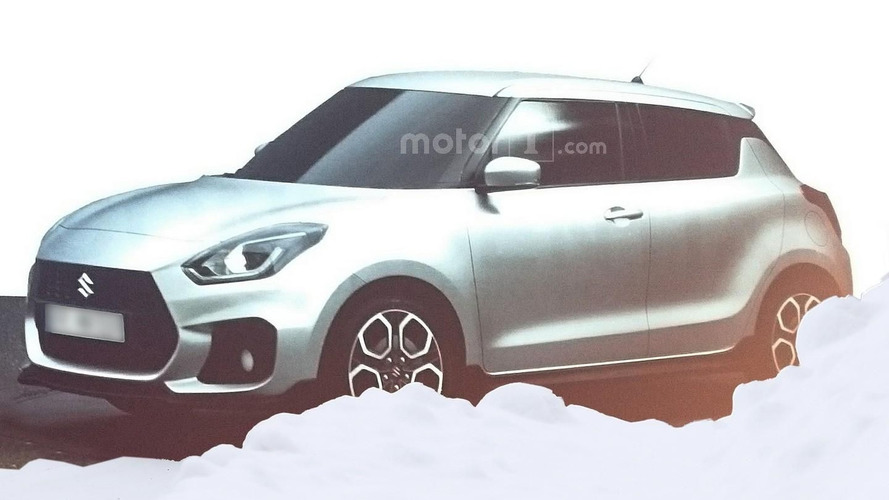 The next-generation Suzuki Swift and Swift Sport where shown earlier this year during a dealer presentation in France and we have the images to prove it.

The next-generation Suzuki Swift and Swift Sport where shown earlier this year during a dealer presentation in France and we have the images to prove it.

Suzuki’s supermini will feature the company’s latest design language implemented in the Baleno and will adopt a floating roofline. It will also have discreet rear door handles mounted up top near the blacked out C-pillars.

The changes compared to the current model are quite substantial and are more evident on the white Swift Sport. It has a hexagonal grille flanked by bigger air intakes which are part of a reworked bumper that hosts a spoiler lip. The sweptback headlights have a different design compared to the outgoing Swift and on the Sport version incorporate LED daytime running lights. The Swift Sport also has bigger wheels, dual exhaust tips finished in chrome, different taillight graphics, and a beefier roof-mounted spoiler.

The regular Swift finished in red has a more humble grille and a less aggressive front bumper with smaller air intakes. You will also notice that on the standard Swift, the LED DRLs are positioned above the fog lights. The wheels are likely down a size and the single exhaust tip remains hidden underneath the less aggressive rear bumper.

The differences between the two are less obvious on the inside where one of them has a red trim while the other comes with white accents. Both share a flat-bottomed steering wheel and three rotary knobs for the climate control system. The dashboard is home to a decent-sized touchscreen while on the lower area of the center stack there's probably a power outlet and USB & AUX connectivity. It’s unclear at this point whether the cabin will be roomier, but our source tells us the new Swift will be a tad shorter and a little bit wider.

Shown together with the facelifted SX4 S-Cross at the dealer presentation, the new Swift is expected to get an official reveal in December before hitting dealerships in the spring of 2017. Nine months later, the Swift will give birth to a Sport version bringing a stronger engine, a more aggressive look, and better handling.