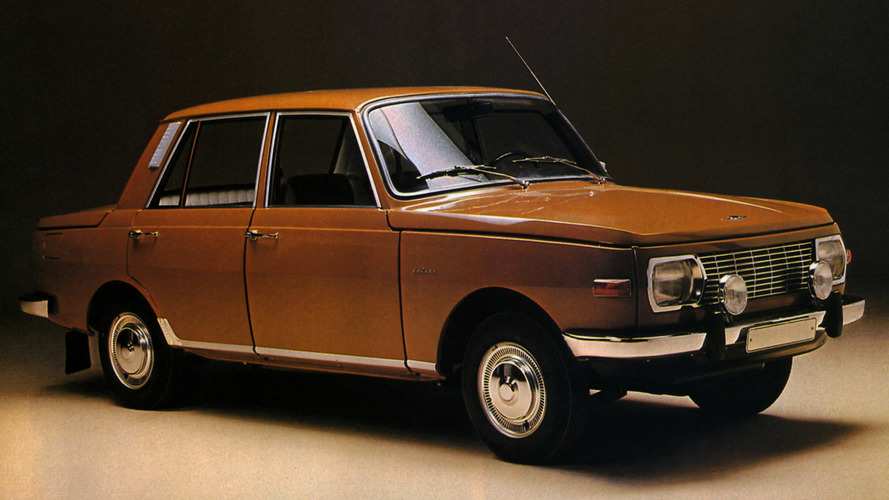 One of the most popular cars in the Soviet Bloc, the Wartburg 353 has a two-stroke, three-cylinder engine and classic sedan shapes.

The 353 is a midsize family car (by the 1960s standards), a successor of the 311 series, which was offered in four-door sedan, five-door estate, and two-door pickup versions. It was only 166.1-inches (4.22-meters) long or slightly smaller than a Ford Focus from last generation.

Production started in 1966 at a factory in Eisenach, East Germany. The car remained on the assembly lines for about 25 years with the latest examples being from a heavily revised version called the Wartburg 1.3. More than a million examples were produced overall.

As mentioned before, the car is powered by a three-cylinder, two-stroke, 1.0-liter petrol engine, mounted on the front axle and sending power to the front wheels through a four-speed manual gearbox. Depending on the carburetor, it produced 55-58 horsepower (41-43 kilowatts) and 74-78 pound-feet (100-106 Newton meters) of torque. Top speed was rated at 96 miles per hour (155 kilometers per hour), while 0-62 mph (0-100 kph) acceleration takes 12 seconds.

The 353 was an immediate success throughout the Eastern Bloc, because of several reasons. First, it totally outperformed most of the equivalent vehicles from Soviet Russia in almost every aspect – acceleration, top speed, fuel efficiency, handling, braking, etc. Second, it was very easy to be maintained, because it had relatively simple engine design with only seven major moving parts. Third, it offered room for four passengers and their baggage. That’s why there’s a popular saying that owners were driving a car, but maintaining a motorcycle.

Of course, it had many negative sides too, mainly the lack of any sound dampers, and the boomy and reverberating cabin. Actually, it was so noisy, that most of the customers decided not to order a stereo system. Also, another bad point is the specific road handling with significant understeer, especially in wet conditions.

All that being said, it was a car with its own character. Some called it “Trustworthy Hans,” but “The barrel” was also a popular nickname.

In 1988 the 353 was replaced by the Wartburg 1.3 – basically a heavily upgraded version of the same car, featuring a 1.3-liter, four-cylinder, four-stroke engine from Volkswagen. The last example of it was produced in April 1991.