Mini’s new droptop is bigger and more refined, but no less fun.

Small, affordable convertibles have always made sense for urbanites who still want a dose of Vitamin D in their commute. They’re just as easy to park and live with as any other city car, but provide all the fun of top-down motoring that sun-worshippers adore. It’s no surprise, then, that there’s an all-new Mini Convertible to follow the traditional Hardtop hatch that arrived in 2014.

It takes only a few minutes behind the wheel to determine that the 2016 Mini Convertible is still a cute warm-weather toy. Yet the Mini brand is no longer just about funky small cars – it wants to build real, sensible cars for adults (see: the new Clubman and Countryman). As a result, the new Mini Convertible has grown up, both in terms of size and refinement, and packs more equipment than ever before. Fortunately, that newfound maturity hasn’t come at the expense of the car’s fun-to-drive nature.

The new Convertible is instantly recognizable as a Mini. From the giant headlights and rounded nose, to the rounded-rectangle taillights, it unmistakably resembles every past version of the British icon, albeit now appearing to have finally gone through a growth spurt. Longer and wider than before, with tauter lines on every panel, it’s the most mature droptop Mini design yet. The car looks smart with the roof up or down, and a blacked-out windshield surround is a nice touch on any convertible. 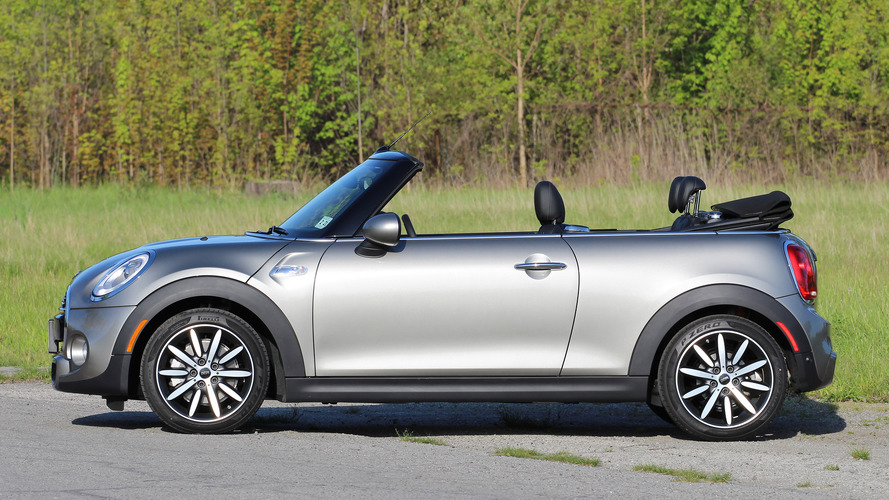 Newfound maturity hasn’t come at the expense of the car’s fun-to-drive nature.

Designers cleaned up the car’s look by deleting the big metal roll hoops that used to sit behind the rear seats. In their place are bars hidden behind the seats that pop up automatically if sensors detect an imminent rollover. This arrangement takes up less space inside the bulkhead than the physical roll hoops, meaning the pass-through to the trunk – a 50/50 split-fold rear seat is standard – is now wider.

Trunk space is up slightly, to 5.7 cubic feet with the roof down or 7.6 with it raised, but overnight trips for two people will still require careful packing. The actual trunk opening is letterbox-like, but a feature called Easy Load makes stowing awkwardly shaped cargo easier: Two levers within the trunk allow you to temporarily raise the base of the convertible top to provide a much wider aperture. You still won’t be moving a desk chair, but it’s a handy touch that improves on the car’s practicality.

The most notable changes come in terms of a new chassis, with the Convertible growing 4.5 inches in length (5.1 for the S) and 1.7 inches in width on a 1.1-inch longer wheelbase. The third-gen droptop is considerably stiffer than before, thanks in part to various diagonal cross braces under the car, which means its suspension can have the same tune as hardtop versions. 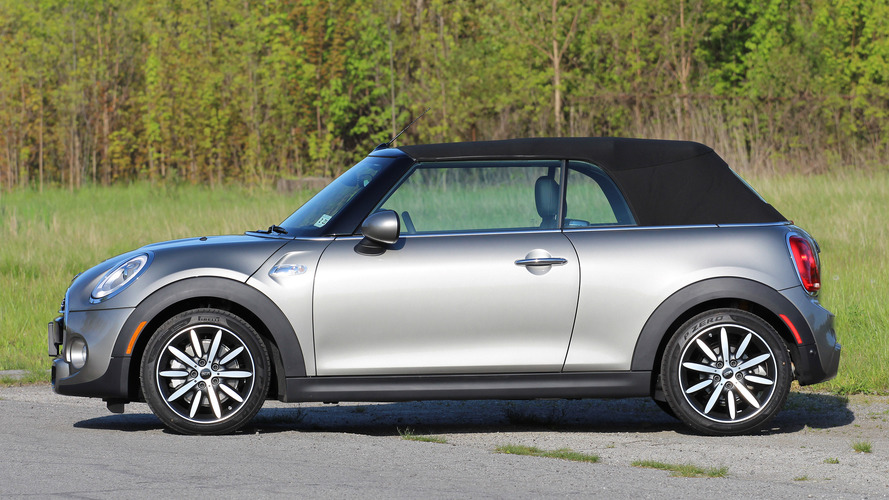 The car looks smart with the roof up or down, and a blacked-out windshield surround is a nice touch.

In addition to traditional up and down modes, the Mini’s convertible top also has a sunroof mode in which the front of the top slides back 16 inches (the Smart Fortwo cabriolet offers the same trick). The semi-open effect is nice for getting some extra light and fresh air into the cabin, but we can’t help thinking you may as well just open the roof all the way. When lowered, the roof folds up on itself at the top of the trunk and impinges on rearward visibility; with it raised, the roof creates giant blind spots when you look over your shoulders.

At the helm of a Cooper S – more than 50 percent of Mini shoppers select the bigger engine – smiles are abundant. With peak torque arriving just off idle at 1,250 rpm, the 2.0-liter turbo-four feels stronger than its power ratings suggest (189 horsepower, 207 pound-feet of torque). The low-end shove makes darting in and out of traffic a breeze, and allows us to power up hills or pass slower traffic on the highway without downshifting from sixth. Power falls off noticeably beyond the 5,000-rpm horsepower peak, so there’s no point winding the engine out to redline.

The delightful six-speed manual transmission makes it clear why 20 percent of Mini shoppers (a really high figure by today’s standards) opt to shift for themselves. The tall shifter slots precisely and easily into each gear, while the forgiving clutch takes the hard work out of stop-and-go traffic. Plus, an automatic rev-match feature smooths out every downshift and there’s a hill-hold feature for anyone disinclined to use the handbrake on inclines. 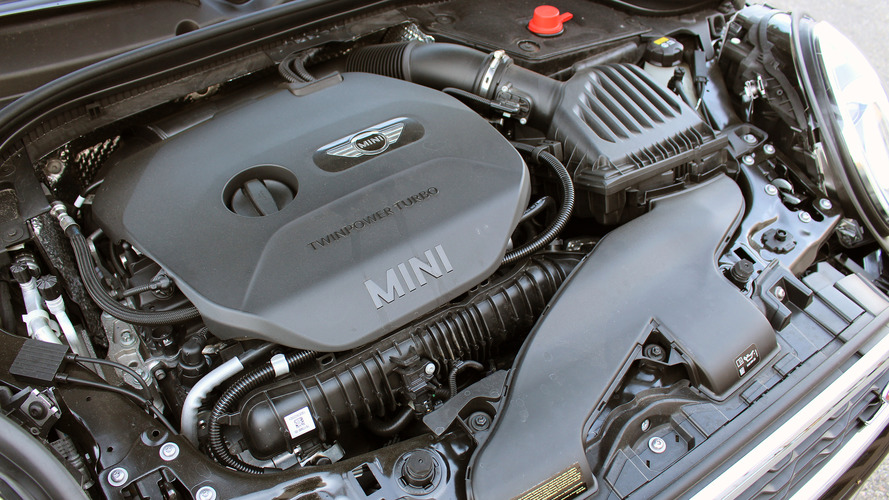 With peak torque arriving just off idle at 1,250 rpm, the 2.0-liter turbo-four feels stronger than its power ratings suggest.

On poorly maintained roads, the Mini Convertible’s suspension soaks up big pothole impacts far more ably than its predecessors. Even with the car’s 17-inch wheels and skinny 205/45 tires, potholes don’t crash and pound into occupants’ seatbacks as in droptop Minis of yore. Quivers ripple through the chassis over big impacts despite the new car’s extra bracing, but the overall impression is one of far greater ride comfort than in any prior topless Mini. Sport mode stiffens the optional adaptive dampers, but the convertible rides with a sense of compliance rather than punishment.

In either suspension mode, the Mini dives into every bend with the eagerness of a puppy chasing squirrels – and that’s despite weighing 127-174 pounds more than the equivalent outgoing convertible. Quick steering and a suspension that resists body roll work together to make the Mini a playful backroad companion. With a narrow track and short wheelbase, plus the fact the driver sits so close to the front wheels, the Mini seems to change direction instantly. The electric power steering is still a little too vague for our liking, but its delicate feel pays dividends when making tight maneuvers in the city.

A quick spin in a base Cooper, with its 134-hp turbo three-cylinder and a six-speed automatic transmission, reveals that Mini fun is not reserved only for S models. Though there’s a lot less power on tap, the Cooper’s eager, responsive engine still zips, and even on smaller, less-sporty tires, the car hangs on enthusiastically around traffic circles. But when the S can return 33 miles per gallon highway and requires only a few thousand bucks more for its extra oomph, it’s hard to argue against going with the more powerful engine. 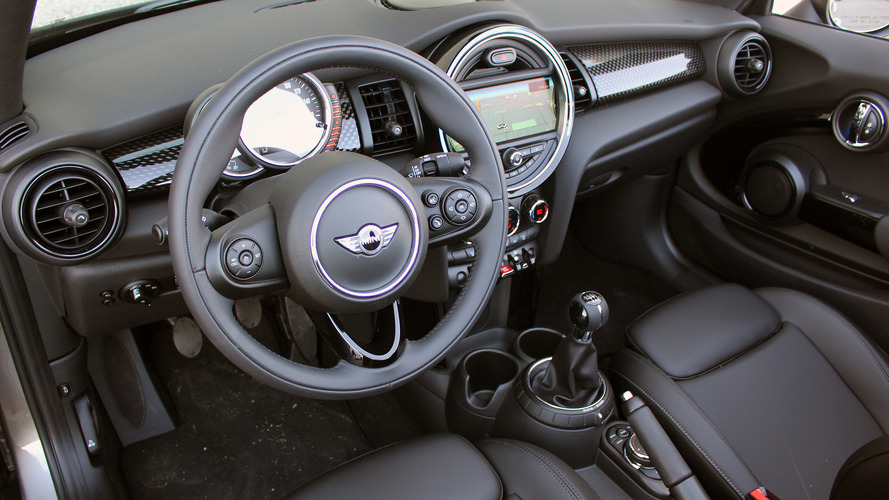 There’s little to fault in the interior of the 2016 Mini Cooper S Convertible. Driver and passengers enjoy comfortably bolstered leather seats, logically arranged secondary controls, and a bright infotainment screen that’s easy to operate via the scroll wheel in the center console. The notably upright windshield catches lots of bug splatter and, as in the Hardtop, its big header means you’ll have to duck to see traffic lights. But because the windshield sits so far forward from the driver and passenger, there’s a less claustrophobic sense than in other convertibles that site the windshield much nearer to occupants’ foreheads. We’d like a bit more in-cabin storage, as the door pockets are too small to fit anything more than a smartphone or wallet.

A lengthier list of standard equipment for the 2016 convertible includes dual-zone climate control, auto headlights and wipers, a heated rear window, a 6.5-inch infotainment display (an 8.8-inch unit with navigation is optional), and puddle lights that project Mini logos on the ground. The glovebox locks in recognition of how often the car will be parked with the roof down. Mini’s traditionally lengthy options list even includes a new Mini Yours top with a woven Union Jack flag design, for a cool $500.

The new convertible’s new length gives backseat occupants an extra 1.6 inches of legroom and half an inch more shoulder room. We still have to scoot the passenger seat pretty far forward to accommodate our legs comfortably, and with our shoulders brushing against the sides of the car, we wouldn’t want to ride in back for longer than it takes to, say, run to get ice cream with friends. There are also child-seat anchors, which seems like the most useful application for the back seats. 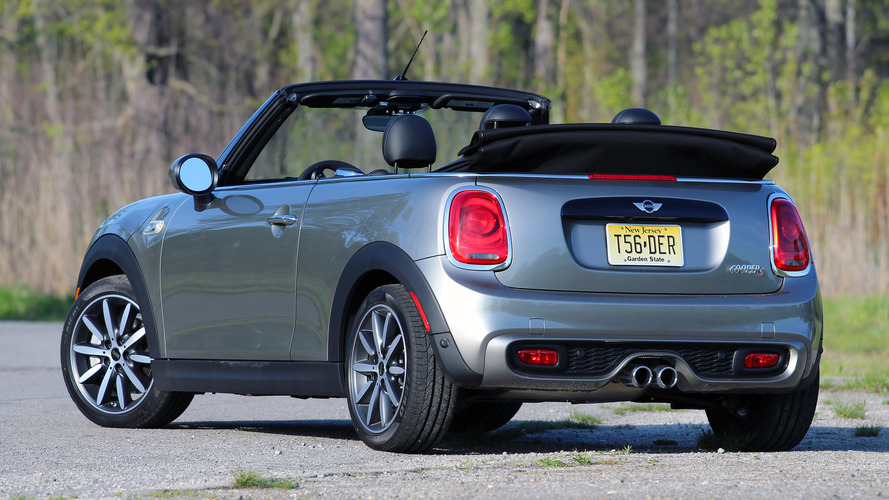 It’s one of the most useful small open-top cars around, offering more space and practicality than the Fiat 500c and even the beloved Mazda MX-5 Miata.

Although adding option packs brings the car’s prices up to relatively costly sums – company officials say average prices are in the low-$30,000 range of the base model and the mid-$30,000 range for S trims – the Mini is still one of the most affordable convertibles around today. More importantly, it’s one of the most useful small open-top cars around, offering more space and practicality than the Fiat 500c and even the beloved Mazda MX-5 Miata. Mini did sell a two-seat Roadster model for a few years, but dismal sales compared to the four-seat Convertible meant it had a very short life.