Nissan is right in the middle of introducing 10 new vehicles over the next 24 months. So far, the Sentra and Versa are in showrooms – competent products, but sub-compact and compact sedans rarely signal a reversal of fortunes for an ailing brand. Instead, it's the 2021 Nissan Rogue that the company needs to be a hit.

As Nissan’s best-selling product, the Rogue is also the linchpin of the company’s long-overdue product offensive – it's also the first of six new or redesigned vehicles coming to market between now and the end of next year. It's the vanguard for what's to come. And if the redesigned Rogue is any indication, Nissan's upcoming products should make the industry sit up and take notice.

Following a substantial redesign, the new Rogue is arguably near the top of a fiercely competitive class and boasts vastly improved driving dynamics, more and better equipment, thoughtful designs, and segment-leading materials. The 2021 Rogue is exactly the vehicle Nissan needs right now. More than that, though, it's the first in a line of vehicles that gives us new confidence in the Japanese brand's future.

Following in the footsteps of the station wagon, the minivan, and the SUV before it, the crossover is unquestionably today's quintessential family vehicle. And while some automakers try to market their CUVs as vehicles for active adventurers rather than families, there's only a hint of active thirty-something in the Rogue – otherwise, it's a family vehicle first.

The backseat is expansive, even though it's smaller in some respects than the competition. The rear bench's legroom grows six tenths of an inch to 38.5 inches, more than a Toyota RAV4. And although that’s a bit less than the Ford Escape or Honda CR-V, the difference is marginal in the real world – the Rogue will happily accommodate two adults comfortably and for long periods of time. Getting in and out is a breeze, too, thanks to rear doors that open to nearly 90 degrees. Take a peek at our first look video from June to see what we mean.

As for smaller passengers, both they and their parents will appreciate the Rogue. In addition to the wide-opening doors, child seats work in all three seating positions, and there are available built-in sunshades. Once they've buckled up the kids, parents will find a versatile cargo area for soccer bags, strollers, musical instruments, and whatever other stuff comes from child rearing. Smart compartments and dividers – an improved version of Divide-N-Hide – make grocery shopping a cinch too. All in all, Nissan put a great deal of thought into making the Rogue work even when it's not moving.

When it is moving, though, passengers will enjoy hanging out in the cabin. Nissan has made tremendous strides with interior materials so that even mid-range models feel plush and comfortable. The cabin feels genuinely premium, with soft-touch plastics on the dash and doors, along with padded bits of vinyl that give Mazda a run for its money. The color selection isn't super expressive outside of the range-topping Platinum, though, so if avant-garde shades get you going, the Rogue might disappoint. From a pure materials standpoint, though, it's hard to beat.

There's more technology too. An optional digital gauge cluster features a 12.3-inch display, although you can only get it on the range-topping Platinum and the functionally is identical to the standard 7.0-inch display. Both our testers, an SL and a Platinum, feature a 9.0-inch touchscreen atop the center stack – the software in there is quick and responsive, while the graphics are competitive for the class.

From a pure materials standpoint, the Rogue's cabin is hard to beat.

But the star of the tech show remains the Rogue's ProPilot active safety system. The 2021 version builds on the previous model's setup, using a new radar in the adaptive cruise control system to provide smoother deceleration. At the same time, the retuned steering assist feels more natural, both while driving in a straight line and in bends.

The top-end Platinum and certain versions of the SL go a step further, allowing the tech to take advantage of navigation and GPS data to handle highway on/off ramps and junctions, while also allowing the system to adjust its speed on curves. In every circumstance, ProPilot integration feels more complete, while the system itself is more approachable. That's a huge win for consumers unfamiliar with this sort of driver assistance tech.

Part of that comes down to the styling. The original Rogue was a curvy, rounded thing that reflected the late 2000s era of design. The second-gen model adopted stronger lines and a V-motion grille. The third-generation Rogue doubles down, adopting a more prominent front end with details designed to add visual mass – stacked lights flank the larger grille, while a broad, flat hood emphasizes height and size.

The Rogue feels substantially larger – both visually and from behind the wheel – than any of the competition.

The combo of an arrow-straight shoulder line (which sits below a similarly rigid beltline), prominent front and rear haunches, and taillights that share a plane with both also make the Rogue look bigger than it is. From the outside, the Rogue looks big for the class – from inside, it feels like a class-above product.

At both around-town and highway speeds, the Rogue is very quiet. Despite the pre-production status of both my test cars – a range-topping Platinum and an upper-mid-range SL – and the blustery conditions typical of autumn in Michigan, there was little in the way of wind noise. Thank the focus on aerodynamics (active grille shutters, air curtains, revised A-pillars, and a sleeker shape) for that.

The Rogue is solidly focused on the comfort side of the equation.

The Rogue's updated CMF-C/D modular platform (a product of Nissan's alliance with Renault) does a fine job of managing tire roar and the sound of suspension impacts, too. Even the naturally aspirated engine, a typical acoustic weak point for Nissan due to its preference for continuously variable transmissions, remains hushed at all but the loftiest engine speeds.

That isolation translates well to the way the Rogue drives – it will enter the compact crossover segment as one of the most comfortable vehicles around, hands down. On undulating roads or slightly rough surfaces, the Rogue exhibits composure, with little in the way of vertical motions. But it remains stable in the face of larger imperfections too, whether they affect one side of the car or both. The Rogue's body control is genuinely excellent.

The Rogue is solidly focused on the comfort side of the equation. And while that approach typically means sacrificing some handling quality, this is not a cumbersome or dimwitted car – the Rogue remains mid-pack in the way it addresses corners aside from one notable thing. The steering, redesigned for the 2021 model, is exceptionally responsive from on-center, going a long way to reinforce that the Rogue remains a compact crossover, rather than a mid-sizer. Jink the steering wheel, as if in a sudden lane change, and this crossover reacts readily.

Good as the steering is, the otherwise humdrum driving character offsets it. For now, the Rogue is only available with a naturally aspirated, 2.5-liter four-cylinder that produces 181 horsepower and 181 pound-feet of torque. Peak torque sits at 3,600 rpm and the Rogue's weight is a hefty 3,490 pounds for our front-wheel-drive SL tester, while all-wheel drive pushes the weight past 3,600 pounds. 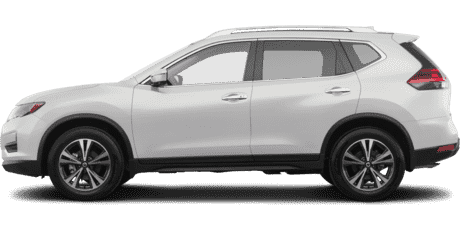 All of this is to say that the Rogue is rather slow, especially compared to rivals like the Ford Escape and Mazda CX-5, which match the Nissan at a base level but also offer more powerful engines for premium trims (Nissan reps were mum on more powerful Rogue variants in the pipeline, but I bet we’ll see a turbocharged option in the near future). At around-town speeds, the 2.5-liter's performance is adequate – the Rogue can keep up with traffic. You will need to wind it out at highway speeds, but while the actual performance is rather uninspiring, the way the Rogue handles a boot-full of throttle is respectable.

The standard continuously variable transmission is excellent, managing revs well and only keeping the engine speed up as long as needed before the ratios adjust and the speed falls again. At the same time, the 2.5-liter's voice rarely annoys – the cabin's sound deadening does a fine job of hiding any harsh notes or buzziness. Again, while the performance itself might be solidly compact, the Rogue's management of noise, vibration, and harshness feel like a class above.

But each of those trims comes with enough equipment to outweigh the modest price increases. The S adds 17-inch alloy wheels and LED headlights, while rear automatic emergency braking complements its standard Safety Shield 360 suite. The SV now adds standard ProPilot assist, push-button start, and a surround-view camera, and it’s available with a panoramic sunroof. The SL boasts that option as standard now, along with three-zone climate control and sunshades on the rear doors – you can also snag the advanced version of ProPilot as part of the $1,320 SL Premium package. 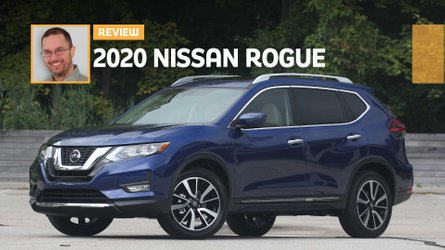 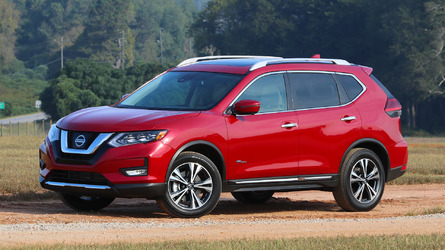 While I drove the Platinum, its added content over the SL – the digital cluster, wireless Apple CarPlay, a 10.8-inch head-up display, an upgraded Bose audio system, and quilted leather upholstery – never felt worth the starting price. Instead, I recommend the optioned-up SL, which in the case of my tester retailed for a reasonable $34,415.

The 2021 Rogue is not going to reverse Nissan's fortunes on its own. But this crossover is a sharp rebuttal to doubters both among the media and enthusiasts, and it signifies the brand has what it takes to compete. While the company doubtlessly wants to put 2020 behind it, if Nissan's product offensive is anything like the new Rogue, then 2021 will be a very good year.