A dull but practical way of saving fuel.

Nissan doesn’t have a great history with selling hybrid crossovers. It introduced a hybrid version of the Pathfinder for the 2014 model year... and promptly discontinued it in the U.S. a year later due to poor sales. The company is hoping for much more success with its newest hybrid, based on the Rogue crossover, which joins the new Murano hybrid. Rival Toyota sees as much as 15 percent of RAV4 sales going to the hybrid model, and Nissan wants in on that action.

The Nissan Rogue Hybrid builds on a great foundation. The standard Rogue crossover, also updated for the 2017 model year, is inoffensive, practical, affordable, and efficient. To that recipe, Nissan adds a new hybrid powertrain designed in-house that combines a 2.0-liter gasoline engine and a single electric motor. The former produces 141 horsepower and 144 pound-feet of torque, while the electric motor is rated for 30 kilowatts. Together, they produce a combined 176 hp. That’s six more than the non-hybrid Rogue, though the hybrid also has to lug around about 200 pounds more mass. The battery and motor can drive the car alone at speeds of up to 75 miles per hour. 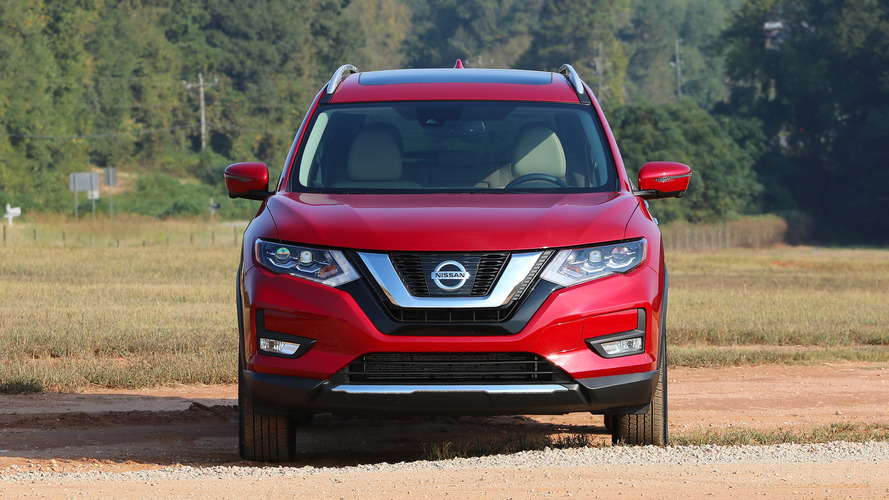 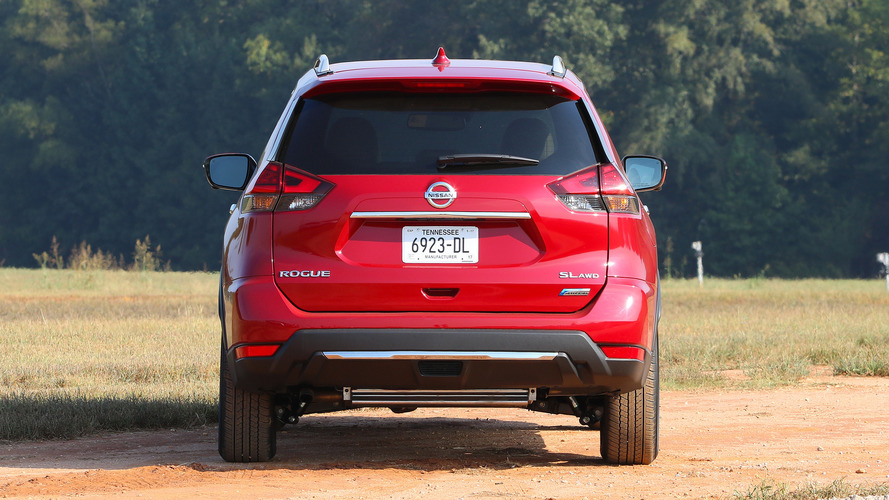 Leaving a stop sign in a hurry is sometimes a frustrating waiting game: depress accelerator, wait a second, then proceed.

Because the lithium-ion battery is located under the cargo floor near the spare tire, there are some compromises in utility. The rear seats don’t recline or slide, features that are available on the non-hybrid model, though they do still have a 60/40 fold to increase cargo space. And overall cargo room drops slightly compared to a regular Rogue, from 32.0 to 27.3 cubic feet with the seats raised, and from 70.0 to 61.4 cubic feet with them lowered. You also cannot get the optional third row of seats, though only seven percent of all Rogue buyers go for it anyway.

Nissan wisely chose lots of free-flowing rural roads for my test drive of the Rogue Hybrid, with little stop-and-go driving, so we’d have few encounters with the car’s clunky step-off behavior. The powertrain uses two clutches to connect or disconnect the motor and engine from the continuously variable transmission, but often there’s a pause and hesitation as neither motive source seems to provide any acceleration. Leaving a stop sign in a hurry is sometimes a frustrating waiting game: depress accelerator, wait a second, then proceed.

The 2.0-liter gasoline engine cuts out readily on the road, and makes very little fuss when it re-engages.

Once actually moving, the Rogue Hybrid accelerates with the same smooth, deliberate briskness as its standard counterpart, with just enough power for family crossover drivers. Slowing down is much more problematic, not because the regenerative brakes don’t work, but because an overly springy, numb pedal proves difficult to modulate. Stopping smoothly is a tricky balancing act of guessing how much deceleration you’ll get from every millimeter of pedal input; other motorists probably thought I was a 14-year-old learner driver. All hybrids and EVs used to have trouble making regenerative brakes feel realistic, but in 2016, most competitors have solved the problem and the Nissan feels a step behind the curve.

The 2.0-liter gasoline engine cuts out readily on the road, and makes very little fuss when it re-engages. The battery and motor aren’t really beefy enough to accelerate the Rogue Hybrid without the gas engine very often, but in steady-speed coasting the tachometer needle regularly plunges to zero. On my rambling route through the sorts of 55-mph roads that allow any car to return great fuel efficiency, the Rogue’s trip computer inched up toward 33 mpg. A non-hybrid version I drove on similar roads indicated 30 mpg, though. As with most hybrids, a page in the color trip computer lets drivers dork out on the power flow between the various drive components. 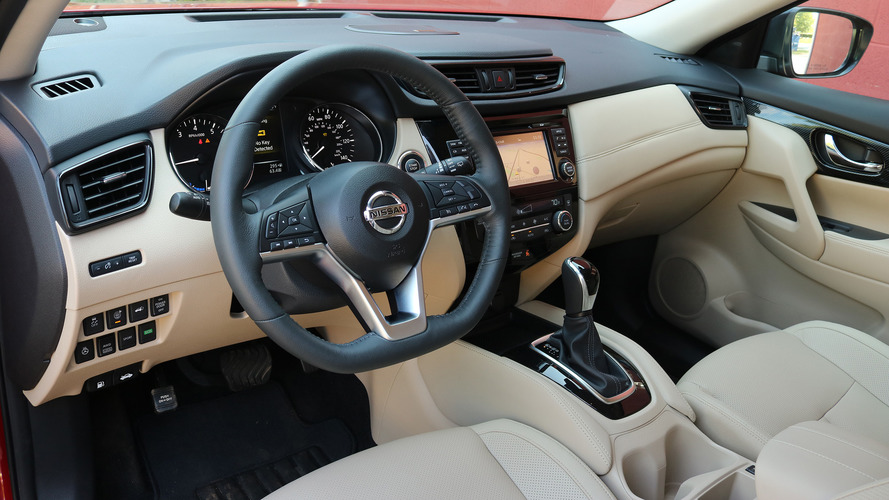 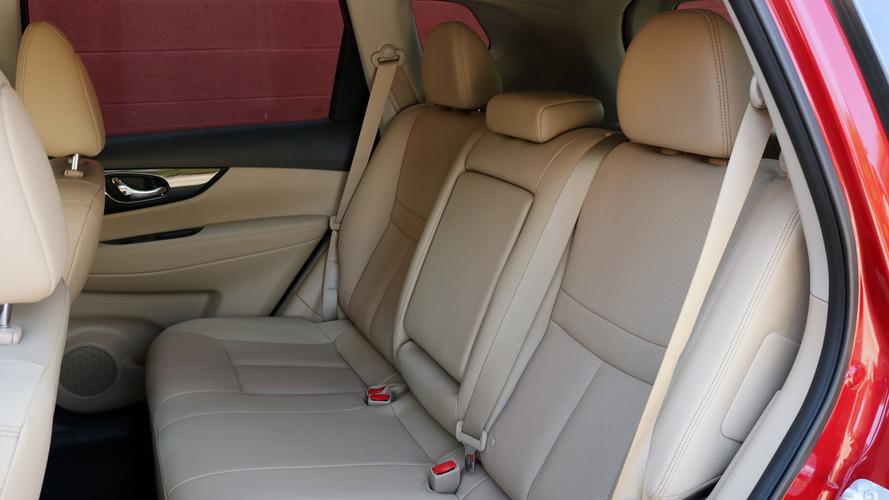 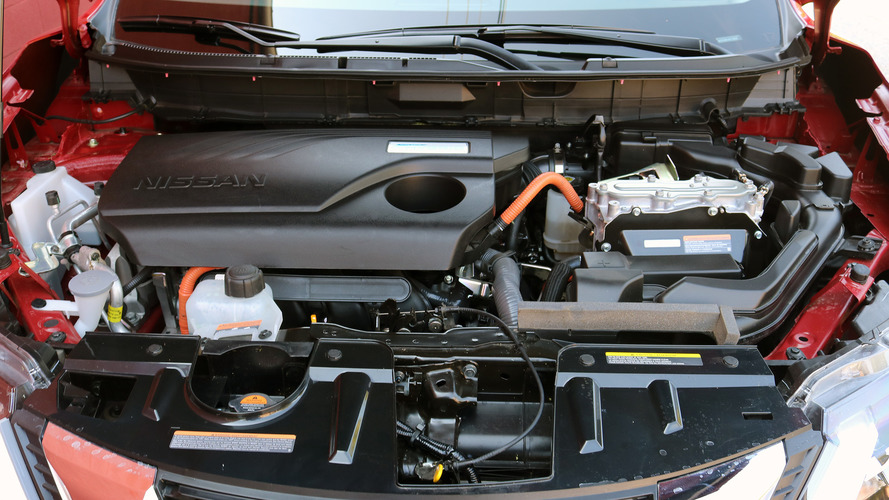 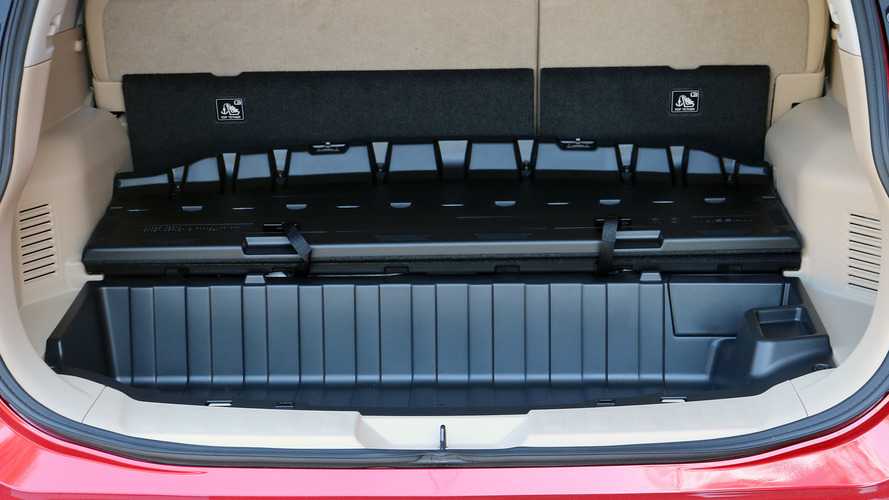 The look, inside and out, is smart but anonymous.

Like the standard Rogue, the Hybrid keeps its occupants from feeling too much of the outside world. Soft suspension generally floats over rough roads, with a bit of floatiness evident from the car’s extra heft compared to a standard Rogue. Lots of extra sound deadening compared to the 2016 Rogue keeps wind and road noise reasonably muted. Light steering does little to inspire driver confidence but is fingertip-easy when parking.

Nissan doesn’t bother offering a base S trim level for the Rogue Hybrid, and both the SV and SL come nicely equipped. The former has 17-inch wheels with low rolling-resistance tires, heated seats, blind-spot warning, roof rails, LED running lights and taillights, and a 5.0-inch touchscreen sound system. Moving up to the SL adds niceties like 18-inch wheels, leather upholstery, a 7.0-inch touchscreen with a Bose sound system and navigation, a 360-degree camera system, LED headlights, and a kick-to-open power liftgate. Options include a power moonroof and pre-collision braking. Pricing will probably be about $2,000-$4,000 more than equivalent non-hybrid trim levels, but Nissan hasn’t finalized any numbers just yet.

All versions wear the same interior and exterior revisions as other 2017 Rogues, albeit with subtle PureDrive badges to denote the hybrid powertrain. The look, inside and out, is smart but anonymous. That little calls out this model as a hybrid is probably a good thing for buyers who dislike the dorky designs and paint colors of some eco models, but it also won’t impress anyone who buys a hybrid to make a statement. 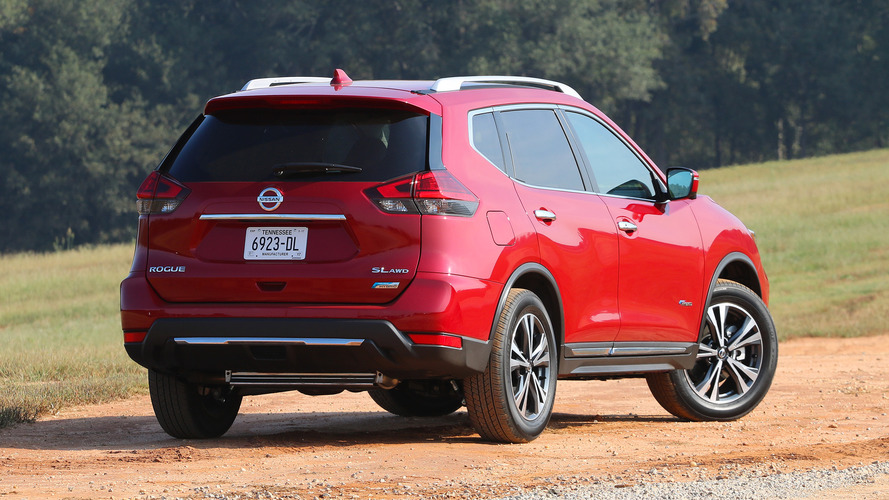 It's a smart way to save fuel while still carrying a family and retaining all-wheel-drive mobility.

Though official EPA ratings aren’t yet available, Nissan expects 33 miles per gallon city and 35 highway for the front-wheel-drive version, and 31/34 mpg for the AWD hybrid. Those figures stack up nicely against the Toyota RAV4 Hybrid’s 34/30 mpg; it’s available only with all-wheel drive. Non-hybrid Rogues are rated at 26/33 mpg with front-drive and 25/32 with AWD.

Without exact pricing figures, it’s tough to evaluate just how much money the Rogue Hybrid might save drivers in the long run. But based on what we know so far, it will be a smart way to save fuel while still carrying a family and retaining all-wheel-drive mobility. Its demerits include a ho-hum driving experience, soggy brake feel, hesitant off-the-line acceleration, and the loss of the sliding/reclining second-row seats.

The Rogue Hybrid is almost without direct rivals – the RAV4 Hybrid is its only close competitor – so it should appeal to shoppers who need more utility than is offered in traditional hybrids like the Prius. Just like the RAV4, the Rogue Hybrid is hardly the most exciting new car you can buy, but it’s a plenty sensible way to save gas without any deal-breaking compromises.