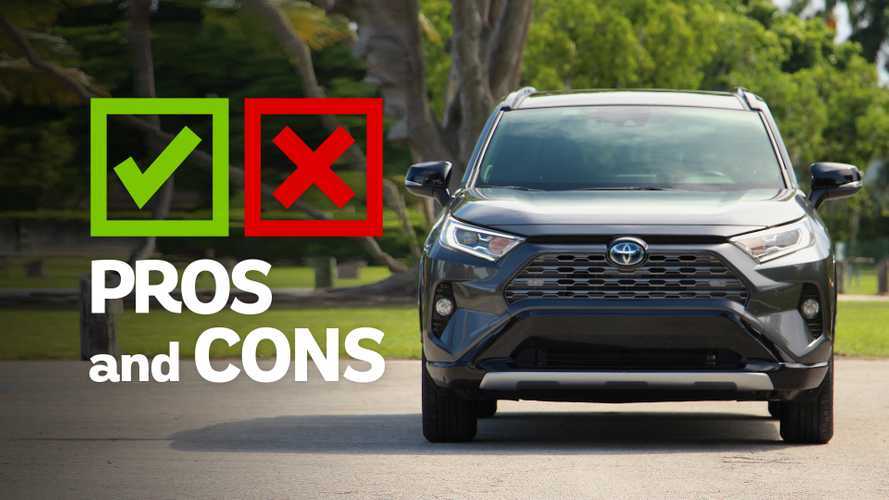 If you hadn't given serious thought to the Toyota RAV4 previously, you might want to now. The 2019 RAV4 is a huge improvement over its anonymous predecessors. Bold styling helps the compact crossover stand out, and the available hybrid model – now with up to 41 miles per gallon on the highway – means it's more efficient than ever.

A few minor inconveniences in the tech and towing department could dissuade some especially picky buyers, but there's still plenty to like about the 2019 Toyota RAV4 Hybrid as a whole. It's a well-conceived, nice to drive crossover that remains competitive in a class filled with lots of good options.

The Toyota RAV4 Hybrid affords owners an impressive 41 MPG in the city, 38 MPG on the highway, and 40 combined. Those numbers are good for the class and improve on the outgoing model by 15, 5, and 11 MPG, respectively. Compare that to the outgoing Nissan Rogue Hybrid (33/35/34) and the smaller Subaru Crosstrek Hybrid (23/29/25), and the RAV4 Hybrid is more efficient.

The entire RAV4 range looks great, including the Hybrid. Where other hybrids often ditch the traditional lines of their gas-powered siblings for funkier cues, the RAV4 Hybrid doesn't sacrifice style for efficiency. Even the Subaru Crosstrek Hybrid has some odd silver accents on the front fascia that differentiates it from the traditional version. The only thing that separates the hybrid RAV4 from the normal gas-powered model are barely noticeable blue accents on the badge, a staple for Toyota hybrids, and the availability of an XSE model.

The Toyota RAV4 Hybrid is an exceptional daily driver. It shines on the highway with a cushy suspension and impressive sound deadening, but is equally as good in the city, too. The torquey 2.5-liter engine and three electric motors and lightweight, responsive steering makes the RAV4 Hybrid quick and nimble around town without sacrificing comfort. The laggy throttle we felt in the gas-powered Adventure model disappears here thanks in part to the additional oomph from the battery pack, and the Hybrid's smaller 18-inch wheels (versus 19 inchers on the Adventure model) don’t feel as back-breaking over imperfect roads.

The RAV4 Hybrid’s infotainment system is identical to the unit in the Adventure model we drove, and it’s once again nothing to write home about. The same 8.0-inch screen and Entune 3.0 package (a $1,620 upgrade) carry over here, too. The tacked-on screen and cheap-looking buttons don't do the rest of the RAV4's likable interior justice. The outdated graphics, meanwhile, look like something you'd find on a vehicle years older than this. Apple CarPlay, at least, alleviates some of the issues, but we'd appreciate a better looking setup.

In the transition from pure gas to gasoline-electric hybrid power, the RAV4 loses a lot of towing strength. The traditional 2.5-liter engine tugs up to 3,500 pounds, while the Hybrid does just half that (1,750 pounds).

Remember when the RAV4 was still affordable? These days, you can't get a base RAV for less than $25,650. The Hybrid model adds a $2,200 premium on top of that, and the entry-level RAV4 Hybrid LE starts at $27,850. Adding options make things significantly pricier.

The priciest option on our tester is the $1,620 Entune 3.0 audio upgrade, which adds an in-dash navigation system, a larger 8.0-inch touchscreen, more USB ports, and satellite radio (with a free three-month trial), among others. But the Tech package, with adaptive cruise control, rear cross-traffic alert, and a Qi wireless charger, is another $640. The Weather package, with rain-sensing wipers and a heated steering wheel, is $375. Paint protection is $395, carpeted floor mats are $269, and a panoramic sunroof is another $200.

Almost fully loaded, our XSE Hybrid tester with all-wheel drive tops out at a whopping $38,294.