We often think of modern three-row SUVs as big. A Lincoln Navigator is big. A Mercedes-Benz GLS is big. And a Chevrolet Suburban is definitely big. But no matter how long, tall, and wide automakers make their largest SUVs, it's unusual for one to offer seating for more than eight people, and even then, those in the rearmost row should either be very short or very young (probably both).

Vans do not have this problem, mainly because they dwarf three-row SUVs. If you need to carry all the humans, modern vans are as good as it gets. And there are few as adept at people-moving as the 2020 Ford Transit Passenger, which we've just spent a week driving. It seats up to 15. It's over a foot longer than a Ford Expedition Max. It's over nine feet tall. Fully-grown adults can stand up in the back with headroom to spare. The only vehicles better at hauling people than a big passenger van like the Transit require a commercial driver's license.

Freshened for 2020, the updated Transit line still looks pretty darn familiar – a huge box with a massive windshield and a very short hood. But new touches, like LED running lights, give this utility vehicle a cleaner, more refined look. That bit of extra tinsel, though, can't overshadow this van's purposeful design. From the standard steel wheels (even on our range-topping XLT tester) to the body-mounted bump stops for the wide-opening, barn-style doors, the Transit's roots as a workman's van are always within view.

This van immediately reminds driver and passengers of its blue-collar roots once inside. Aside from the leather-wrapped steering wheel, optional leather seat upholstery, and a splash of silver on the gear lever, the entire cabin is a mishmash of hard plastics. While we'd normally condemn a vehicle with so much of the stuff, the reality is that plastic is ultra-durable and will hold up to years of abuse – it makes total sense here. The material is more forgivable, too, when you take in the fit of the different trim pieces. The dash, for example, looks rather poor until you consider the lack of sharp edges or obvious gaps. There's cheapness here, but it's well-executed cheapness.

Our Transit Passenger, with its long wheelbase and high roof, offers 445.4 cubic feet of passenger space. That's an absurd number. So yeah, the Transit can manage a lot of people comfortably.

In our 14-passenger van’s setup, there are three rows of seats behind the front row, but they're split – there are two single chair’s on the passenger’s side of the van and three two-person benches on the driver's side. An aisle divides the two middle rows, allowing easy access to even the four-abreast bench at the very back of the bus. And you can walk back there normally, too. With 5.5 feet of headroom (measured from the seats), your six-foot, one-inch author can stand straight up with room to spare.

And once settled into those seats, there's ample leg and shoulder room, too. We've spent many hours in the back of Transit Passengers being shuttled to and from airports and it's rarely a bad time. Third and fourth-row passengers have 35.6 inches of legroom, while second-row passengers get slightly less at 33.7. That's likely dependent on where the driver and front-seat passenger set their chairs, though. On our test van, the second row was the roomiest of the bunch. The front seats are roomy, but the pedal box is tight owing to the position of the front wheels.

Cargo space is something of a mixed bag in the Transit. With the fourth row in place, there's little trunk to speak of. You can remove each row of seats and expand the cargo hold from minuscule to massive (up to 350 cubic feet), but that process is slow and labor-intensive. That said, there's an abundance of places for things in the front row – from overhead storage to a cubby that sits atop the dash to a multitude of cup holders, drivers that spend a lot of time on the road will appreciate the thought Ford put into the cabin. There are few storage spots further back, though, which is yet another sign of the Transit's roots as a workhorse.

The Transit falls flat exactly where we expect a leaf-sprung, body-on-frame cube to. With little in the way of sound deadening or lateral stiffening, the ride quality is terrible and the noise, vibration, and harshness is grating. Road imperfections reverberate through the cabin, with impacts moving clearly from the tires to the frame and the body. Each of these impacts is loud, too, so if you're riding in back, don't plan on dozing off easily.

Ford made significant technological strides in updating the Transit. The automaker's Sync 3 infotainment system sits front and center on an optional, tablet-like 8.0-inch touchscreen. Graphically, the Transit is on par with other Ford products, although the system does feel a little laggy in responding to inputs. The touchscreen offers HD and satellite radio, and there are a number of USB-A ports in the front row that allow Apple CarPlay and Android Auto connectivity.

The option packaging is rather convoluted, though, with five separate options, two screen sizes (a base 4.0-inch and the aforementioned 8.0-inch) for the in-dash display and infotainment. Just save yourself the hassle and get our tester’s top-end setup, which features the larger display with navigation.

Additional standard tech on our XLT tester includes HID headlights, which are excellent, and heated seats, which we didn't use because it's July. You can also snag job-specific items like dual alternators, dual batteries, upfitter switches, a trailer brake controller, a power-sliding side door, and power running boards.

The Transit offers two engines at the moment: a base 3.5-liter V6 featuring both port and direct injection, or a twin-turbocharged 3.5-liter V6 EcoBoost. We had the latter, and boy, is it a charmer. Packing 310 horsepower and 400 pound-feet of torque, this setup gives the boxy Transit a surprising level of straight-line punch. The big van surges off the line with a relentless wave of torque pushing it along – blasting away from traffic lights like a rocket-propelled elephant is genuinely hilarious. We kept the load light, but as proven in our last review of a twin-turbo Transit, this engine can handle heavy loads with ease.

New for 2020 is an optional all-wheel-drive system. While our tester featured it, the reality is that AWD doesn't get much use during Michigan summers. Still, we wouldn't hesitate to tick the box for the $4,695 option – yeah, it's pricey – if all-weather ability is important. Regardless of engine or drivetrain, every Transit carries Ford's capable and well-received 10-speed automatic transmission. It was an invisible partner during our testing, offering up quick, smooth gear changes while responding readily to sudden throttle inputs.

If this piece feels suspiciously light on understatement, allow us to catch up: handling is not the Transit's strong suit. It's heavy and feels a little top heavy when pushed too hard through a corner, but what do you want? It's a nine-foot-tall van – of course it doesn't handle like a Lotus Elise. 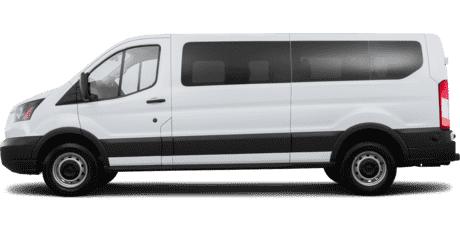 save over $3,400 on average off MSRP* on a new Ford Transit Passenger Wagon

You can snag full-speed adaptive cruise control for $455, while Ford's Enhanced Active Park Assist can automatically reverse into a perpendicular parking spot and move into and out of parallel parking spots for $550. The parking upgrade also includes ultrasonic parking sensors Powerful HID headlights are also available for $455.

Our only safety-related complaint focuses on visibility. Sight lines forward and to the sides are excellent, but with 12 headrests and a rear barn door, you won't be seeing much at the back. Flip-down headrests would be a huge benefit to Transit Passenger pilots.

Hauling Stuff Instead Of People: 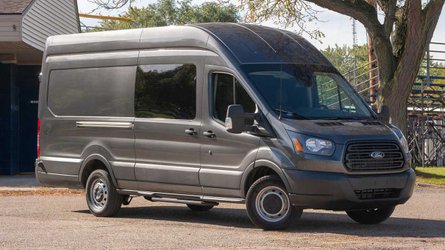 Because of the Transit's size, the EPA doesn't require Ford to publish fuel economy figures, so we don't consider this score in our overall verdict. While far from an apples-to-apples comparison, the Ford F-150 and Expedition feature similar powertrains and are good for 19 and 18 miles per gallon combined, respectively. We'd expect the Transit to fall several points below those numbers – efficiency in the mid-teens feels like a safe bet.

The cheapest Transit Passenger is an XL trim with a low roof and a standard 129.9-inch wheelbase for $40,180. Getting a high-roof body like our tester's requires moving to the longer 147.6-inch wheelbase and spending $3,755. An even longer body is available with a dual-wheel rear axle, but all the extra van is behind the four rear tires. Moving from the XL to the XLT trim, meanwhile, requires $1,885. All told, sans options, our long-wheelbase, high-roof Transit XLT starts at $45,820 with rear-wheel drive and the base engine. All-wheel drive adds, as we said, $4,695, while the twin-turbocharged V6 costs $1,495 regardless of the number of driven wheels.

The Transit's expansive options catalog makes comparison difficult but suffice it to say our 14-seat tester felt extremely well equipped for $60,410. That seems like a lot, but compared to the Ford's chief rival, the Mercedes-Benz Sprinter, it represents an excellent value.

The base Sprinter has a higher starting price at $41,095, but optioned up like our tester, with a high-roof body, the maximum number of seats (15), and the upgraded diesel-powered V6, it retails for $54,700. In other words, without options, a 15-passenger Sprinter costs nearly $9,000 more than a Transit with the same number of seats, while consumers can visit their nearest Ford store and drive away in a more powerful, torquier, gas-powered, all-wheel-drive (the 15-passenger Sprinter is rear-drive only) Transit and save nearly $2,700.