When we evaluate vehicles, we like to use them how they were designed to be. Thus, we saw the perfect opportunity to test the 2020 Mercedes-Benz Sprinter when some holiday plans with family required a way to transport nine people in one vehicle.

There are lots of Sprinters to choose from, from the Cargo and Crew models to the Chassis Cab Cutaway versions you might see on the road as motorhomes. For our purposes, though, Mercedes-Benz's Passenger model best met our needs with its 12-person seating capacity for the 144-inch wheelbase version.

In case you haven’t heard, the Sprinter was totally redesigned for 2019. There’s a fresh and sleek design, a new four-cylinder gas engine, and a plentitude of safety systems that are a first for this van.

We spent our time behind the wheel driving family hither and yon across northern California – on long highway stretches, through twisty terrain, up and down elevations, and in the city. Our takeaway: the new Sprinter is an impressive machine that drives far smaller than it looks and is more comfortable than its work roots might suggest.

When Mercedes announced it would be offering the new Sprinter with a turbocharged four-cylinder gas engine for the first time, we were surprised. How could such a small engine handle not only the weight of such a large van but everything it’s designed to carry, from nearly 3,500 pounds of cargo to 15 people in the case of the longest wheelbase version.

This little 2.0-liter’s 188 horsepower and 258 pound-feet of torque left our mind at ease, though, once we got behind the wheel. Even with nine people aboard, the four-cylinder engine had little issue accelerating onto highways or passing slower traffic. Its dance partner, a 9-speed automatic transmission, deserves much of the credit, as its shift timing and gear choices were nearly always spot on. Mercedes’ also did a great job muffling the sound of the engine; even when it’s working hard, you hardly hear it.

Mercedes probably sells far more Sprinters for commercial use than for passenger hauling, so it wouldn’t be surprising if comfort, specifically ride quality, weren’t a priority in this van’s development. That’s simply not the case, though. Even this shorter 144-inch wheelbase model (a longer model offers a 170-inch wheelbase) glides well over bumps and road imperfections, and the tightness of the van’s build quality manages to quell the structural shudder we’ve experienced in other older large vans.

In our time driving the new Sprinter, we gained a new-found sense of appreciation for owners who drove vans like this before the invention of blind spot-assist systems. That’s the one safety system we relied on the most, particularly because the Sprinter’s side and rearview mirrors are too small for the job.

The new Sprinter comes with so many more safety features, though – as many as most luxury cars on sale today. At one point or another during our time with the new Sprinter we had occasion to test its automatic emergency braking (in reverse, no less), lane-keep assist, adaptive cruise control, 360-degree camera, and traffic sign recognition, and in each case we were glad they were there. Do keep in mind, though, none of them come standard. 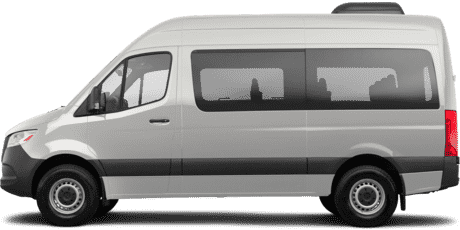 save over $3,400 on average off MSRP* on a new Mercedes-Benz Sprinter Passenger Van

The Sprinter van we tested has four rows of seating. The last row of seats, which seats four people, is located right above the van’s rear axle. One poor passenger thought retreating to the back row so she wouldn’t be bothered was a good decision, but regretted it from the moment we hit a bump on the highway that sent her airborne. Unfortunately for her, the seating assignments were permanent once we had all agreed on them.

Throughout our trip, the Sprinter made squeaks and rattles while driving down the road that we could never find and fix. This is, after all, a commercial vehicle, and so many components that present an opportunity for unwanted noises are bolted on. Everything’s silent on a smooth road, but rough surfaces remind you this isn’t a luxury vehicle like most that wear the Mercedes badge.

The base price of a 2019 Sprinter 2500 Passenger Van 144-inch model is $44,190, while the as-tested price of this one is $60,972. If you have over six kids, a van like this might be your only option, whether it’s from Mercedes, Ford, or Ram. But if you can fit your brood in a traditional minivan, you’ll spend far less onfor a more comfortable and luxurious vehicle. The only reason for choosing something like a 12-passenger Sprinter van when you have six kids or fewer is keeping them as far away from each other as possible.