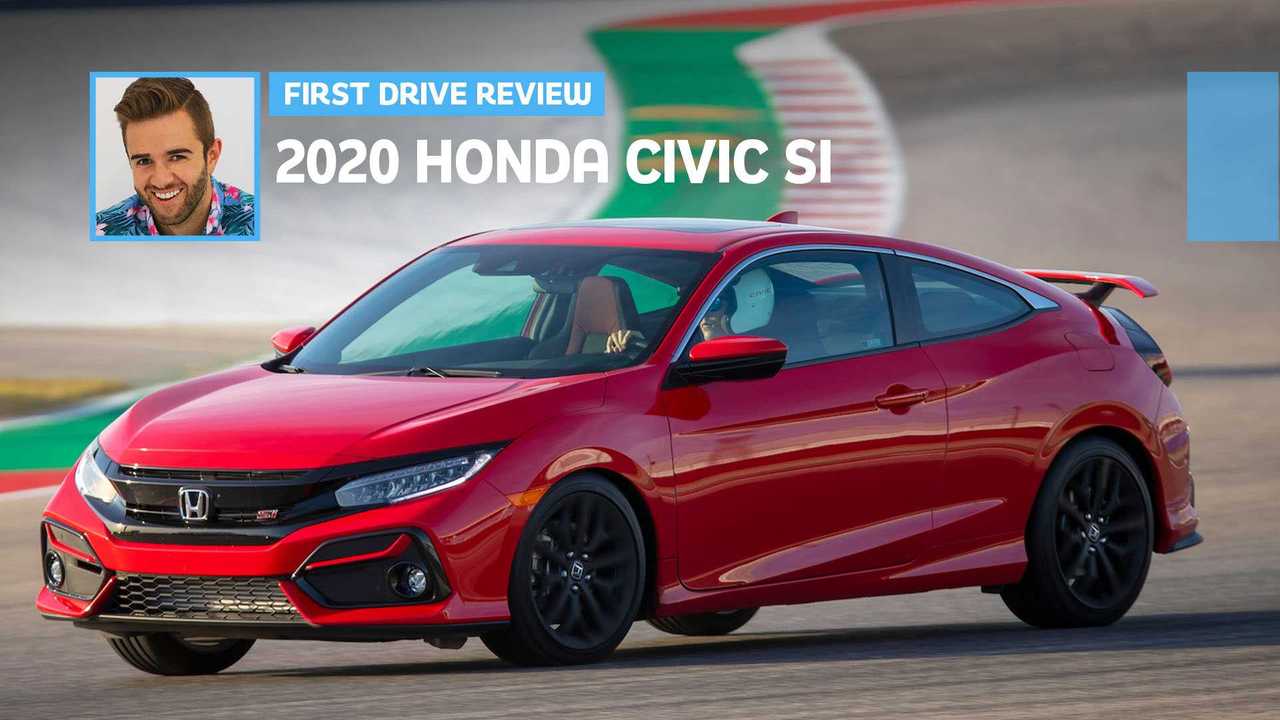 The Honda Civic Type R is the unabashed poster child of the Honda lineup, thanks to its unmistakable looks, lovable power, and fantastic front grip. However, at $36,300 it’s beyond the reach of some enthusiasts.

Enter the 2020 Honda Civic Si, with a fresh mid-cycle update that brings some welcome improvements to Honda’s best performance bargain. The Type R remains the Honda performance pinnacle, but at $25,930 (including destination) the Civic Si is a brilliant driver’s car with a fire-sale price tag.

Compared to the pre-facelift 2019 model, the new Si is largely mechanically unchanged, though it features design and technology improvements. It still comes in sedan and coupe form, although both body styles receive slight visual tweaks. The front and rear fascias get revised fog light housings and new body-colored accents. The grille is slightly different and more importantly, the Si now uses the same LED headlights as the Type R, which are a major improvement over the outgoing model’s projector-beam halogens. There are also standard 18-inch black-painted wheels that come wrapped in standard all-season or optional summer tires. Power comes from a turbocharged 1.5-liter inline-four making 205 horsepower and 192 pound-feet of torque. The only available transmission remains a six-speed manual, though Honda shortened the final drive ratio by 6 percent, which Honda says improves the car’s acceleration, though it comes at a cost of 2 miles per gallon across the board. Fuel economy drops to 26 mpg city, 36 highway, and 30 combined.

Compared to the pre-facelift 2019 model, the new Si is largely mechanically unchanged.

Much like its LED headlights, the Si’s interior takes cues from the Type R with new red accents on the front seats and dash. Unfortunately, Honda didn’t update the infotainment system, which sadly is not the new HondaLink system found in cars such as the Accord, Pilot and Ridgeline. beeping with each touch of the screen and overrun with confusing menus and layout. But hey, at least we get a volume knob now, as well as Apple Carplay and Android Auto, which came to the Civic in 2019. The most noteworthy change is the addition of the Honda Sensing safety suite, which includes adaptive cruise control, lane-keeping assist, front collision warning, automatic emergency braking (which works despite the manual transmission), and automatic high beams.

In terms of packaging, the summer tires are the only available factory option on the Si – everything else comes standard. Honda added some great features to the 2020 model, while the price only climbs $700 compared to the 2019 model. But the Civic Si’s value proposition – impressive as it is – plays second fiddle to its grin-inducing dynamics. This car is an absolute hoot to drive. To prove that point, Honda took us to the Circuit of the Americas (COTA) in Austin, Texas, to push the Civic around the 3.4-mile track.

With vast straightaways and long sweeping turns, COTA is a playground designed for cars with much more power than the Civic offers. That said, the Civic’s attainability makes it feel special on this circuit that annually hosts multi-million-dollar Formula 1 cars.

Even in this setting, the Si's predictable nature is approachable to amateurs and professionals alike. Honda’s professional drivers on-site are clear that the name of the game with this front-wheel drive Civic is managing understeer. The car’s mechanical limited-slip differential keeps things neat and tidy around the track’s twenty turns, save for a few driver-induced missed apexes. If things get too out of hand, pulling back on the throttle puts things back in check. Though understeer is occasionally present, the Si’s back end is planted at all times, even with the gas pedal pinned to the floor through corners.

Speaking of full throttle, the Si’s power is adequate but manageable. Only in the latter half of COTA’s three-quarter-mile main straightaway does the car seem to run out of steam, which conjures memories of prior Civic Si models and their top-end VTEC power. While the power at the top of the rev range is missed here, the current car’s turbocharged engine provides happy low-end torque in its place. With it, we keep the Civic in third and fourth through 90 percent of the track, with occasional opportunities to shift up to fifth and down to second. Rowing through the gears is a true pleasure due to the stubby shifter and short-throw layout. The clutch pedal is featherlight and engages early, making the frequent trips between 3rd and 4th quick and easygoing.

Only in the latter half of COTA’s three-quarter-mile main straightaway does the Civic seem to run out of steam.

Steering is another check in the W column for the Si – it’s equal parts quick and precise. Those traits are most noticeable through COTA’s infamous esses. Meanwhile, the suspension is stiffer than the standard Civic model’s but doesn’t beat you up over time. It falls in line nicely with the rest of the Si’s sporting but daily driveable character. Never does the car get unsettled, even over the track’s bumps or through its elevation changes. In fact, the only notable misbehavior comes from the emergency collision warning system, which mistakes late on-track braking behind the car in front of us for an oncoming collision, applying additional brake force and throwing up a giant BRAKE sign on the dash.

Among its delightful personality traits, the Civic Si’s approachability is perhaps its best. Getting familiar with the car takes only a matter of laps, and it’s easy to correct driver errors over the course of one track day. And for days spent off-track, the Si offers the same tossable driving character, highlighted by its wonderful transmission and precise steering. Throw in the added updates that come with the mid-cycle refresh to make everyday commuting better, and you’re left with a driver’s car that absolutely warrants its price.