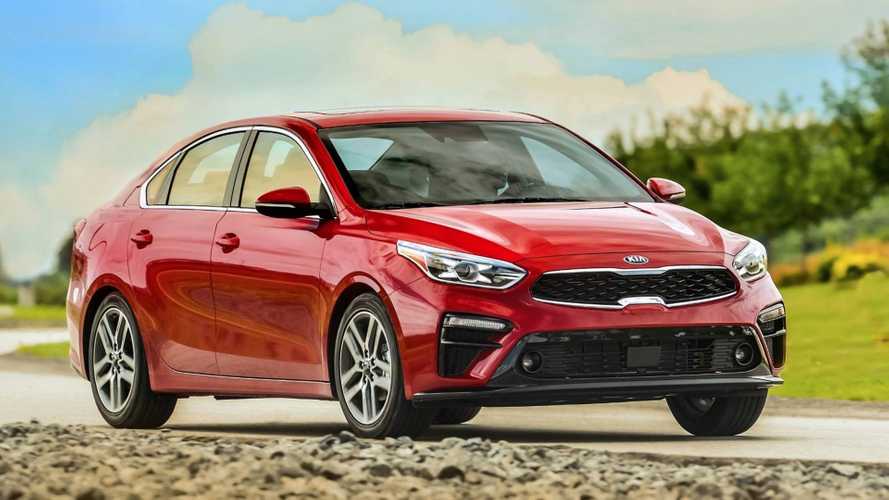 The Kia Forte finally makes a name for itself in a tough segment, and you can thank the Stinger.

In order to understand the hyper-competitive compact car class, you have to look at the numbers. So let me bore you with them briefly. A whopping two million compact cars drove off dealer lots in 2017. The Honda Civic represented more than 377,000 units, and the Toyota Corolla another 308,000. Bottom line: this segment still moves a lot of product, even with the imminent SUV takeover.

This Is Kia's Forte:

So with the Kia Forte sitting at a meager sixth place on the sales chart in 2017 – it only counted for 117,000 units in the segment – the car is an outlier. Or more accurately, an outlier within an outlier. But Kia shouldn't worry. Following the strategy laid out by the larger, more performance-y Stinger, the compact Forte is ripe for success.

The "Tiger nose" grille and large lower intake help the Forte’s face stand out. The sharp headlights do their best Stinger impersonation, and the backside, particularly the taillights, have inklings of the Optima’s DNA. These carry-over elements are necessary prerequisites for building brand equity — especially in such a competitive class.

Look for the same Kia-centric cues in the cabin, too. The wide, horizontal design of the dash is clearly Stinger derived, as are the air vents, buttons, and even the gearshift lifter. A standard, tablet-style 8.0-inch touchscreen (with standard Apple CarPlay and Android Auto) juts up from atop the dash, and two climate control dials offset the sharp, simplistic look. For what it's worth, the Forte is the only compact car with automatic climate control as a standard feature.

Kia gets high marks not only for styling, but quality.

Kia gets high marks not only for styling, but quality. The Forte's cabin feels more premium than its mainstream designation would suggest. The heft, trim pieces, and general sturdiness of the steering wheel were Audi A3 levels of good. The buttons, dials, and dash didn't feature any seriously offensive hard plastics. And the leather seats – in the trim-topping Launch Edition (essentially an EX with some upgrades) – were super soft with both heat and ventilation functions.

If you want safety, the Forte has it. Forward collision avoidance and driver attention warning come standard on all trims. Our tester, though, had the fully spec'd adaptive cruise control system with lane keep assist, which felt really progressive – no ping-ponging – with the ability to navigate even sharper turns, something that cars like the Jetta can't do.

The Stinger is a template for the Forte in a lot of ways, but performance isn't one of them. The 2.0-liter four-cylinder engine produces a meager 147 horsepower and 132 pound-feet, matching the Volkswagen Jetta at the bottom of the segment. Those numbers aren't damning for this segment (the Volkswagen Jetta only has 147 hp), nor did they make the Forte feel outrageously slow – but it's nothing impressive. Let's hope those rumors of a “more exciting” option come to fruition.

Buyers can choose from either a six-speed manual or a continuously variable transmission. Kia calls it an “Intelligent Variable Transmission (IVT),” but that’s strong wording here – this CVT is far from intelligent. Not even clever engineering like a chain-driven belt and extra sound deadening hide its true identity, one of constant droning and lethargic responsiveness. It's a far cry from the eight-speed automatic in the Stinger, even though it does its best to mimic an eight-speed autobox in Sport mode.

Kia calls it an “Intelligent Variable Transmission (IVT),” but that’s strong wording here – this CVT is far from intelligent.

Sport mode, at least, tightens things up significantly. The steering gets some much-needed weight, and the CVT pulls more power at lower RPMs. The suspension doesn't get any firmer, but it's already pretty responsive out of the box. The Forte is a whole 26 percent more rigid than the outgoing model, which means it isn't super comfortable, but it is tossable on the twisties. The beautiful backroads outside of Pittsburgh and parts of northern West Virginia highlighted the Forte's newfound agility. It’s not as tight or composed as the Civic or Mazda3, for example, but it’s a big step up from the outgoing model.

If you don't drive it like a fool, that 2.0-liter engine will return a modest 31 miles per gallon in the city, 41 on the highway, and 35 combined with the CVT. That's a three mile per gallon upgrade over the outgoing model.

The 2019 Forte starts at $17,690 for the FE model with a six-speed manual. The car we tested – a fully loaded EX Launch Edition – rang in at $25,200 (not including $895 for destination). That's not affordable, especially not for a Forte. Thankfully, even if you don't opt for the Launch Edition – which has special features like an orange paint job, standard wireless charging, a Harmon/Kardon audio system, and advanced safety – the $21,990 EX still offers a lot of features for the price.

It may sound like marketing jargon, but the Stinger's trickle-down effect is real and evident here. The Forte looks the part – both inside and out – and offers premium features at a non-premium price point. You won't be sold on its performance credentials, but the Forte has enough charm, tech, and style to potentially woo buyers away from front-runners like the Civic and Corolla.