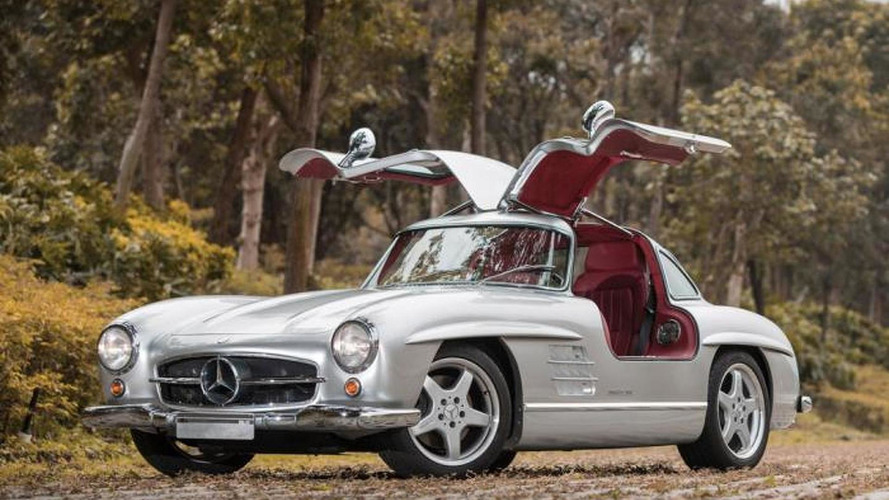 A rare and exquisite Mercedes-Benz 300 SL by AMG will go under the hammer at RM Auctions in early May in Monaco.

A rare and exquisite Mercedes-Benz 300 SL by AMG will go under the hammer at RM Auctions in early May in Monaco.

AMG started working on the beautiful 300 SL when asked by a Brunei sultan to put modern internals in a gullwing coupe and a roadster. An additional nine orders were placed so between 1996 and 2009 AMG restomodded eleven original 300 SLs (eight gullwings and three roadsters). A 1954 gullwing with chassis number 198040 is now up for grabs at RM Auctions and will be go under the hammer in Monaco this May.

The 300 SL retained its chassis and body but AMG decided to remove the original straight-six engine and installed a V8 6.0-liter motor outputting 380 bhp (283 kW) and 427 lb-ft (578 Nm). In addition, the original swing-arm rear suspension was replaced by a five-link arrangement together with Bilstein shocks and AMG's alloy set. Other upgrades included a four-speed automatic transmission, disc brakes and power steering.

Moving on to the interior, the 300 SL features Nappa leather upholstery combined with an Alcantara trim and a HWA steering wheel. AMG also installed carbon fiber protective panels and a Sony-branded CD changer. As a final touch, the engineers from Affalterbach used the original 300 SL instruments but added an electronic display.

Gallery: 1954 Mercedes-Benz 300 SL with official AMG restomod to be auctioned