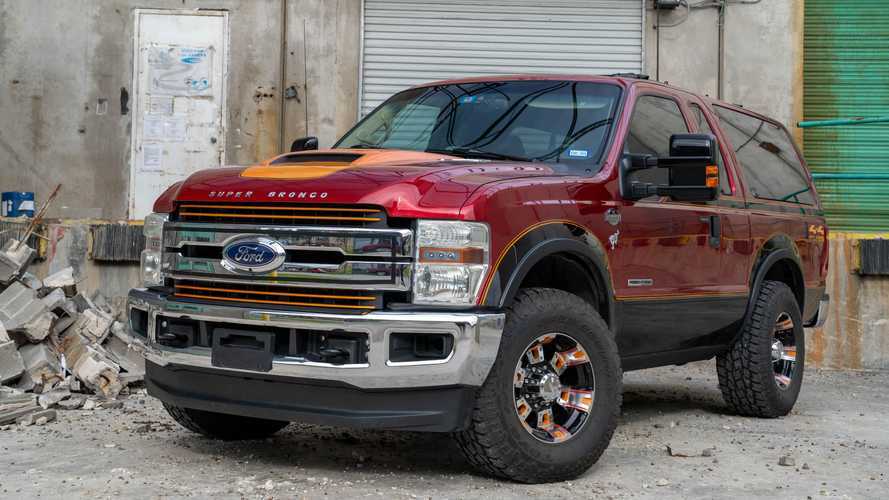 Shopping for a car is hard enough, but what if the vehicle you want doesn’t even exist? That was the conundrum facing the owner of this highly customized truck, lovingly dubbed the Ford Super Bronco.

David Stockman’s earlier project, a 1996 Ford Bronco with a swapped-in 7.3L diesel V8 from a 1991 F-350, needed a follow-up. According to a Reddit post from his son Russell, his criteria included maneuverability, an easily accessible and useful rear seat, and unique styling. And while we think it could only be called “maneuverable” relative to a full-size truck or an Excursion SUV, there’s no denying the Super Bronco nails it on uniqueness.

This Ford Explorer Is Mashed Together With A Tow Truck

The first purchase in creating the Super Bronco was a 2005 Ford F-250 Super Duty crew cab. The donor truck had already been relieved of much of its exterior bodywork and interior, although the cab and 6.0-liter Power Stroke V8 remained. The body of a 2001 Ford Excursion was next on the list. The non-running turbodiesel V8 received a full rebuild, as well as some durability and performance modifications for an estimated 400 horsepower (298 kilowatts). The front and rear axles from a 2012 F-250 4x4 gave the Super Bronco four-wheel drive (with an electronic locker in back providing better traction).

Next up came the substantial body and frame modifications needed to mate the Excursion’s rear end to the Super Duty. Adapting the half-doors from an extended cab to the Excursion required a fair amount of bodywork, with commendable results. Then, the SUV’s shell was cut just in front of the newly attached rear doors. Stockman opted to combine the rear frame of the Excursion with the front of the Super Duty, joining the platforms together with welds and heavy-duty bolts.

Once the Excursion’s rear was blended to the Super Duty – all atop the newly crafted frame – the Super Bronco started to come together. A modernized front end features the hood, fenders, and headlights from a 2008 Super Duty and the grille from a 2017 Super Duty. Stockman grafted on the bullnose forward portion of a 1999 Super Duty hood to blend better with the new grille. Upside-down taillights from a modern pickup make an appearance on the Excursion’s rear half, along with a King Ranch tailgate insert and red light bar sporting “Super Bronco” script.

According to Jalopnik, Stockman carried out the paintwork himself. A two-tone red and black paint job looks appropriately aggressive, set apart with twin orange pinstripes that match the hood scoop and accents found in the front grille. The aftermarket wheels wear the same black and orange motif, and a thick black band generates from underneath the beltline before terminating neatly on the cab’s rear corners. While certainly aggressive and eye-catching, the Super Bronco is also tastefully modified – it calls a hot rod to mind.

A custom interior features the dashboard from a 2017 Super Duty, with a Samsung tablet mounted front and center. The heated and ventilated seats come from a Lincoln MKX, with King Ranch leather upholstery adapted to fit. Stockman crafted the center console from cedar.

According to Reddit, Stockman finished the build in late-2019 and has already put 15,000 miles on the Super Bronco. His son says it attracts positive attention from all kinds of people, and folks chase him down at gas stations and stoplights to comment on the truck, and as a result of all that publicity, Stockman created a Super Bronco website for folks who want to learn more. Anyone who endeavors to create their own vehicle – almost from scratch – deserves admiration from the automotive community, so much more so when the end result is as impressive as this one.