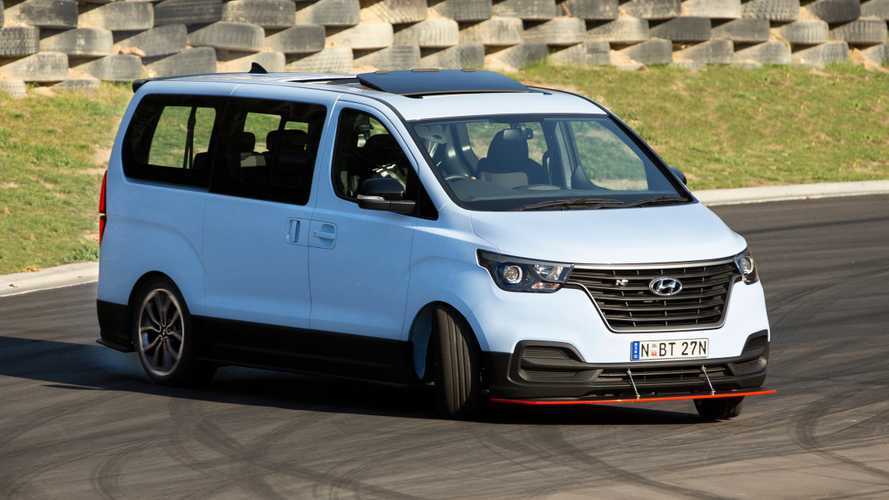 We love it when automakers go out of their comfort zone to build something like this.

We’re all familiar with Hyundai’s N performance division for its hot hatches such as the i30 N and the Veloster N, but their latest product is of an entirely different nature. Sadly just a one-off confined to the track, the iMax N Drift Bus follows another oddly interesting vehicle introduced this week by the company – the Veloster Grappler concept.

In an attempt to evoke the spirit of the Ford Transit Supervan and the Renault Espace F1, Hyundai has decided to build a speedy van equipped with a twin-turbo 3.5-liter V6 engine replacing the standard 2.5-liter diesel. It sends 402 horsepower and 555 Newton-meters (409 pound-feet) of torque to the rear wheels while retaining the eight-seat arrangement of the van you might’ve heard of under the name of Grand Starex, i800 or H-1 depending on market.

All that power is transferred to the road via an eight-speed automatic transmission hooked up to a “corner-carving” differential, while the soundtrack is provided by a bi-modal exhaust making the most out of the V6 noise. There’s more to the unique van as the Australian skunkworks team behind the project also installed a tailor-made aerodynamic body kit, electronically controlled dampers, and N brakes hiding behind the 19-inch alloy wheels sourced from the aforementioned i30 N and wrapped in performance tires.

Fun fact: Hyundai says the iMax N Drift Bus has a perfect 50:50 weight distribution provided all eight seats are occupied. More sporty goodies can be found inside where the front seats and steering wheel have received the N treatment while the second and third rows of seats have been wrapped in matching suede and leather. With an appetite for rubber, it’s a good thing the voluminous 842-liter cargo area has plenty of space for tires.

We’ll see more of the tail-happy van in its signature N Performance Blue paint this coming weekend at the Sydney Motorsport Park in Australia where the iMax N Drift Bus will be entered in the World Time Attack Challenge in three different disciplines.

18 October, 2019 – Hyundai Australia today announces a special one-off custom creation, inspired by the mischievous spirit of N and guaranteed to put a smile on any driver’s face... along with up to seven passengers. Introducing the iMax N ‘Drift Bus’.

Created by an underground skunkworks team at Hyundai Australia, the iMax N makes its global competition debut this weekend at the 2019 World Time Attack Challenge at Sydney Motor Sport Park.

Unlike previous one-off fast vans – such as the Ford Transit Supervan and Renault Espace F1 – the iMax N ‘Drift Bus’ maintains its eight-seater layout in the interest of maximising the fun factor for you and up to seven of your friends.

The inspiration for ‘Drift Bus’ came from Hyundai Germany, who posted an iMax N image as an April Fool’s prank earlier in the year.

In a social media poll asking Australian N fans which Hyundai model should get the N treatment next, the iMax people mover finished in second place, after the Tucson SUV. The Tucson would have been too easy.

The N philosophy of BPM not RPM – putting driving thrills and excitement ahead of ultimate performance – drove the Australian skunkworks team to create the ‘iMax N’ and build it to the highest possible technical standards.

A standard iMax was sent to N boot camp where it bulked up with more muscle. The regular 2.5-litre CRDi engine was instantly discarded and replaced by a monster 3.5-litre twin-turbocharged V6 engine, pumping out over 300kW of power and 555Nm of torque - more than enough to turn rubber into smoke, even on a bus.

Breathing through a bi-modal exhaust ensures the ‘iMax N’ sounds as good as it looks.

The potent engine is paired to a Hyundai-developed eight-speed automatic gearbox that connects to a corner carving differential, helping to transfer the grunt to the rear wheels.

The suspension features electronically-controlled dampers, while the brakes have also been given an N performance upgrade. The 19” alloy wheels, borrowed from the i30 N, are wrapped in performance rubber – but don’t get too attached to them because the ‘Drift Bus’ has an appetite for tyres.

Inside, the iMax N looks the part, with an N steering wheel and N sports front seats, with the rear two bench seat rows also trimmed in matching suede and leather. If you’re going to go drifting with seven friends, you need to be perfectly comfortable and do it in style.

‘Drift Bus’ offers more practically than any sports sedan or performance SUV, with an 842 litre boot perfect for carrying spare tyres. You can also carry an entire pit crew if required*.

iMax N is not a production model, nor is it road legal, so any grin-inducing fun will be limited to the racetrack. But we trust our simple aim has been achieved: to demonstrate Hyundai Australia’s passion for N-gaging and exhilarating vehicles for drivers... and as many passengers as possible.

To show off its performance, iMax N ‘Drift Bus’ will compete in three different disciplines at this weekend’s World Time Attack Challenge:

*Pit crew not included as standard equipment with this vehicle.